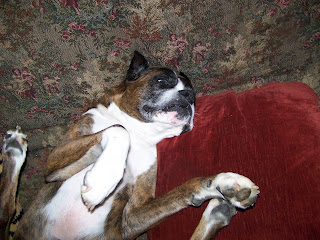 As the holiday season approaches, Goat Rope is pleased to offer some insightful discussions of some of the most beloved television Christmas specials. Our canine commentator is none other than Mr. Sandor Sege (pronounced Shandor SHEGG-ay), official film critic of Goat Rope Farm.

(We must remind the reader that Mr. Sege suffered a head injury when he crashed into a wall whilst chasing a squeaky toy and has since been known to transpose the plots of the films he discusses. Nonetheless, we are convinced that his unique insights into the world of cinema more than compensate for this regrettable shortcoming.)

It is our hope that features such as this will elevate the level of cultural discourse and promote a greater appreciation of both the humanities and the animalities.

OK, so like this one comes on every year and is the coolest Christmas special ever.

There's this reindeer named Rudolph, see, and he wants to help pull Santa's truck, which is really a robot in disguise. But see, he has this red nose when he comes home from college. This guy tries to tell him to get into plastics but he goes off with Mrs. Robinson instead and I got confused after that part.

Anyway, Rudolph has this little elf friend who wants to be a dentist but he gets eaten by a talking plant after being mean to his girlfriend. The other elves don't think he's very good at making toys after that.

Then there's this abominable snowman who runs around scaring people because he wants to win this disco dancing contest with his partner, who is Mrs. Claus. Santa can't do it because he's trying to get home from the Civil War. They win the contest but the mummy runs off with the prize.

It was kind of predictable if you knew the song.