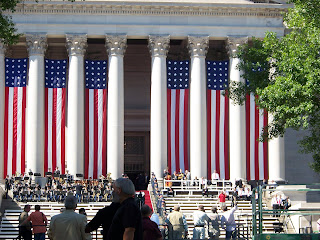 Say what you want about West Virginia, but it seems to do public rituals right, with Senator Byrd's official state memorial service being a case in point. 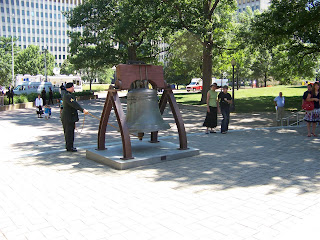 The service featured bell ringing, music, prayers, many speeches (of course) and a 21 gun salute. 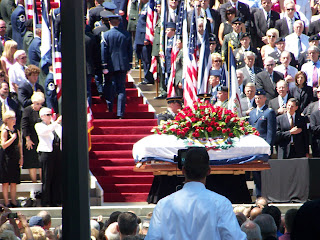 News reports estimated attendance in the thousands, but I'm guessing many chose to watch it on television because they overestimated the difficulty of getting there. Actually, the logistics ran very smoothly. 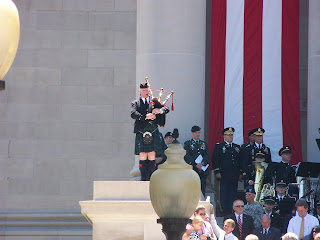 Music ranged from bagpipes to a military band to bluegrass to the state Martin Luther King Jr. Chorus. 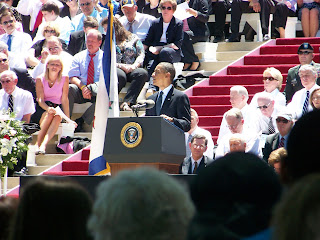 It was a fit tribute to a one of a kind West Virginian. 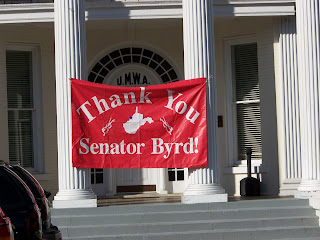 The top story in West Virginia, and a big one nationally, is coverage of memorial tributes to Senator Robert C. Byrd. Thursday night brought thousands of West Virginians to come together and walk behind his funeral carriage or watch the solemn procession. Byrd was particularly appreciated by the working people of the state, as this banner at the offices of the United Mine Workers union attests. 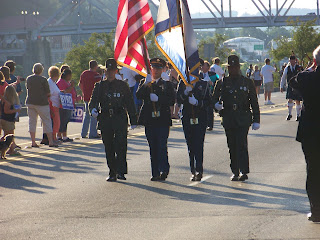 The procession began at the Robert C. Byrd Courthouse and continued down Kanawha Boulevard along the river. 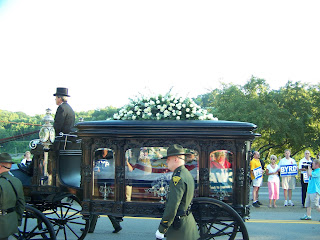 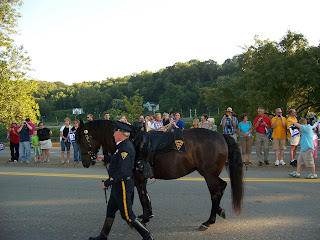 complete with the traditional symbolism of the riderless horse. 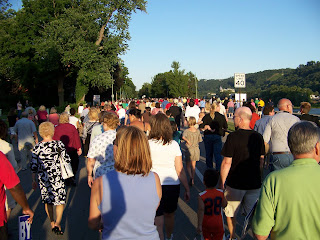 This picture gives a little idea of the size of the crowd. 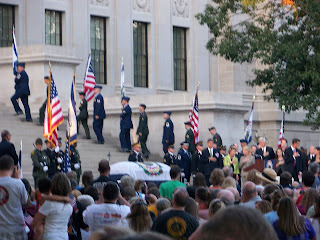 On reaching the state capitol, there was a pause for prayer and music before his casket was taken inside where his body would lie in state overnight while thousands of people lined up to pay their final respects. 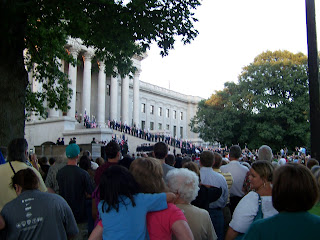 I had several conversations about his life and work along the way, especially about how Byrd kept growing and changing to the very end. One friend put it this way, "He grew into his stature." 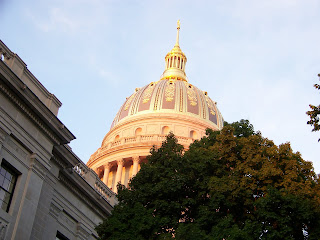 On the return walk, I had a nice talk with the retired Methodist bishop of West Virginia who will give the invocation at the state memorial service Friday. Looking back at Byrd's life, he said "It's a story of redemption...a gospel story."

That was the late Senator's favorite kind of story.
by El Cabrero No comments: 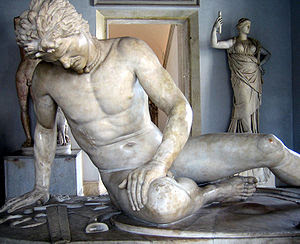 The Dying Gaul, from a Roman copy of a Hellenistic original.

I have often thought that one of the saddest things about contemporary American life (and the competition is fierce in this arena) is that so many people don't really live in their bodies or seem at most to use them for various kinds of consumption. You can see this everywhere, not least in the epidemic of obesity.

One hillbilly hobby that gets on my last nerve--and I could be drummed out of the tribe for this--is the riding of four wheelers. After my stint on the local volunteer fire department, which responded to many calls involving death or injury from riding them, I sometimes find myself thinking of these as Darwin machines or natural selection devices.

In fairness, I'm sure they have their uses and I've been told that some of the trails in southern WV are good for economic development. But, as the saying goes, there's no accounting for taste. Just ask Arpad.

For quite a few people, this seems to be the only outdoor activity they engage in, and the closest thing to exercise, which is sad. Judging by the physical specimens that I've seen riding on them, it seems like most would be better off by any measure in walking, jogging or biking.

I have a feeling Thoreau might agree with me on this. Here's what he said about how we relate to the body in Walden:

Every man is the builder of a temple, called his body, to the god he worships, after a style purely his own, nor can he get off by hammering marble instead. We are all sculptors and painters, and our material is our own flesh and blood and bones.

HONORING A LEGEND. Tonight there will be processions through the streets of Charleston to honor Senator Robert C. Byrd. His memorial service tomorrow will include the president and vice president among those who attend. I plan on going, assuming I can get there, and will share pictures and thoughts afterward. WV Governor Joe Manchin has even given state employees the day off so that those who choose to can attend.

AFTER BYRD. Here's a NY Times article about a visit to Byrd's home town and the political lay of the land.

UNEMPLOYMENT. Congress is likely to vote today on restoring unemployment benefits, a measure which has failed several times in the last week or so. As I've argued here many times, the most immediate deficit we need to deal with is the jobs deficit.

I PREFER COFFEE. Here's an item about the Tea Party and the dangers of underestimating it.

The wild and the good 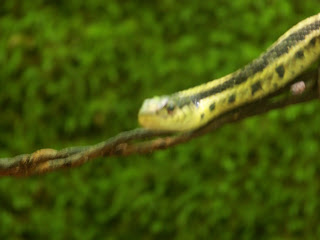 Many people, past and present, have written eloquently of the human need for nature and the wild, but Henry David Thoreau was one of the most eloquent and influential. Here's a little nugget I've missed before in my several passes through Walden:

I found in myself, and still find, an instinct toward a higher, or, as it is named, spiritual life, as do most men, and another toward a primitive rank and savage one, and I reverence them both. I love the wild not less than the good.

The wild, alas is getting harder to find these days. Hmmm...could the same be said about the good?

SPEAKING OF THE GOOD, it looks like West Virginia's memorial service for Senator Robert C. Byrd will have a cast of thousands--including President Obama and Vice President Biden. I plan on attending, but getting there may be a challenge.

WHILE WE'RE AT IT, here are memories of Byrd from those who knew him in Washington.

STATE OF THE STATES. It isn't good, thanks in part to the refusal of conservatives in Congress to extend fiscal aid to states.

BETTING ON THE PRIVATE SECTOR to drive the recovery is risky business.

WHICH WAY? Here's an interesting take on the current political landscape for progressives. 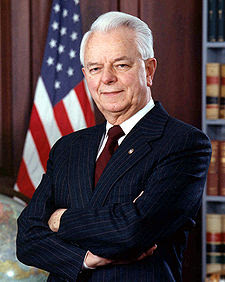 The death of Senator Robert C. Byrd was a loss in many ways for many people. His life was a vivid testimony to the fact that people can keep changing and growing throughout their lives. It's an example and a challenge that will be tough to live up to.

The timing of his death was unfortunate in itself as the nation gears up for debate on energy and climate change issues. Byrd was the only West Virginia leader to take a strong, studied and independent stand on these issues and his voice and vote would have been crucial in making the next steps.

It's sad to say--and I'd really like to be wrong about this--but the great majority of state political leaders are likely, however unintentionally, to work diligently to block and obstruct any effort to seriously deal with climate change, an effort which, if successful, will help to ensure a dismal future for humanity. Coal controversies here are likely to get uglier and uglier without the voice of someone of his stature calling for a reasoned approach.

He leaves a void that is unlikely to be filled.

MORE ON BYRD. Here's Ken Ward's look back at Senator Byrd's changing position on coal and climate over the years. And here's the NY Times obituary.

RECESSION OR DEPRESSION? If it's the latter, blame a failure of public policy.

A CASE IN POINT is made in this op-ed by yours truly about the failure of the Senate to address unemployment and aid to states.

IT'S NOT ALL BAD. It looks like the nation is rethinking its approach to crime and punishment (the real thing, not the novel).

WANDERING MINDS may not be a bad thing.

The end of an era

I was saddened this morning to wake up to the news of the death of West Virginia Senator Robert C. Byrd. He was said to have passed at 3:00 a.m. after being hospitalized for heat exhaustion and dehydration. He was 92 and served in the Senate since 1958.

Byrd was someone who kept growing throughout his long and distinguished career. Unlike many politicians, he seemed to save his best for last. He stood pretty much alone in Congress in steadfastly opposing the Bush administration's rush to war in Iraq and threats to the constitution. He overcame the prejudice of his youth to endorse an African-American candidate for the presidency. And, crucially for West Virginia, he was the only state leader with the courage and the standing to speak rationally but truthfully about coal, climate change, and the choices the state must face. There is likely to be no one with the courage to follow in his footsteps.

"He was a man, take him for all in all, I shall not look upon his like again."
by El Cabrero 1 comment: