Placid and self contain'd? 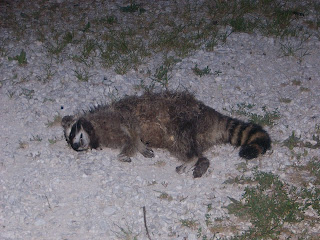 I love Walt Whitman but have felt the need to take him to task on more than one occasion for the poem he wrote about wanting to go and live with the animals, which were supposed to be placid and all that.

Which animals, Bub? Not the ones around here.

I had a feeling that yesterday was going to be a bad animal day early on as I put on my shorts to walk the dogs and felt a sharp pain in my nether regions. It turns out a wasp thought that was a good place to hang out. That was before coffee...

That night's walk was even worse when Arpad, our 140 pound Great Pyr went after something in the dark and the other dogs joined in pursuit, pulling me down in a pretty nasty fall and twisting my already messed up knee. I wasn't sure what he was going after, but there's no stopping him when he's on the warpath. His prey turned out to be a raccoon, a legitimate prize.

After all that, the goats wouldn't come to the barn and I had to limp up the hill after them.

I should have probably gone back to bed after the wasp. Not sure how Walt would have done.
by El Cabrero 1 comment:

Email ThisBlogThis!Share to TwitterShare to FacebookShare to Pinterest
Labels: animals El Cabrero is not God's gift to gardening. If anything, I'm more a walking talking bottle of human Roundup. However, for some reason this does not apply to garlic, a plant to which I seem to have some kind of karmic affinity.

While I'd prefer not to discuss the rest of the garden, I say with pride that this was a good year for garlic. I harvested our crop a while back and it looks like it will be enough to carry is through a good part of the year. This is saying something, since in this household garlic winds up in just about everything with the possible exception of breakfast cereal.

BAD IDEA DEPARTMENT. Here are looks at two of them, including the Balanced Budget Amendment and the Boehner plan.

With all the noise about the debt ceiling debate one might think this was a new and unprecedented thing. It's not. Here are a few numbers to keep in mind:

18...number of times the debt ceiling was raised under Reagan.

7...number of times the debt ceiling was raised under George W. Bush.

Note: many of the same right wing bullies now making dust about raising it in 2011 didn't raise a peep when Bush was running up the debt with tax cuts, a prescription drug bill written by drug company lobbyists, and the unnecessary war in Iraq.

The only thing that's new is using such a vote to ram through drastic cuts in programs that working people depend on and further extend and expand tax cuts for people who don't need them.
by El Cabrero No comments:

Going random and comments on the culture of caving in

It's hard to believe, but Goat Rope has been coming out for over 5 years now, usually six times per week aside from holidays, disasters, and random events. Usually, I've tried to post early in the morning, when possible before 6:00 a.m.

That schedule is going to slide for a while. Posts will still appear at about the same frequency but they may show up at any time. When you least expect it...expect it.

MEANWHILE, THE BIG NEWS is the standoff over the federal debt ceiling, in which right wing extremists are willing to throw the economy in the tank in order to protect tax cuts for the rich--while "moderates" seem willing to pretty much cave in to the blackmail.

Paul Krugman argues here that the biggest threat doesn't come from the Whackadoodles of the right but rather from those who appease them in the name of "centrism" and "moderation":

Watching our system deal with the debt ceiling crisis — a wholly self-inflicted crisis, which may nonetheless have disastrous consequences — it’s increasingly obvious that what we’re looking at is the destructive influence of a cult that has really poisoned our political system.

And no, I don’t mean the fanaticism of the right. Well, OK, that too. But my feeling about those people is that they are what they are; you might as well denounce wolves for being carnivores. Crazy is what they do and what they are.

No, the cult that I see as reflecting a true moral failure is the cult of balance, of centrism.

The cult of centrism goes like this: right wing extremists make ludicrous demands. Rather than saying "That is bat sh*t crazy," members of the cult of centrism attempt to meet them halfway, now matter how extreme that is. When that happens, as Krugman argues, there is no penalty for extremism.

That's not the way to deal with bullies. They need to hit the wall sometimes.
All things in moderation. Including moderation.

GROWING UP HARD. Poor kids face all kinds of challenges in school. I found this NPR story on that to be compelling.

HOT TIMES. Here's an interesting look at the connection between hot weather and violence. 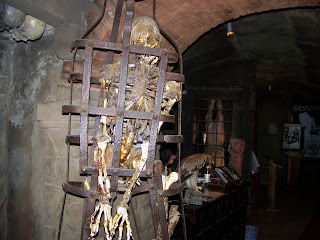 Well, I'm back from a week in Italy. The trip was great. The getting there and back, not so much. The picture above was me after a particularly hellish airport day on the return trip.

On the positive side, I did get to spend a little time with the traveling Spousal Unit and to get a bit of a feel for Siena, Florence, Ravenna, and Rome and had plenty of food for thought and gullet, which will probably show up her e by and by.

In the meantime, here are some things that caught my eye after a week of being out of the loop...

FIGHTING FOR MEDICARE. Somebody's got to do it.

SOME THINGS SEEM TO GO TOGETHER. Like coal and poverty. Not to mention a boom and bust energy economy.

FUN AND GAMES. Some of my union friends and progressive allies are planning a tongue in cheek hot dog sale to fund tax cuts for millionaires. (We are a pretty shameless lot around here and there is no cheap stunt to which we will not resort.) Anyhow, the event got picked up by a Wall Street Journal blog.