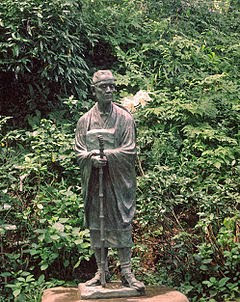 First day of spring--
I keep thinking about
the end of autumn.--Matsuo Basho, 1644-1694
by El Cabrero No comments:

It's a (downward facing) dog's life 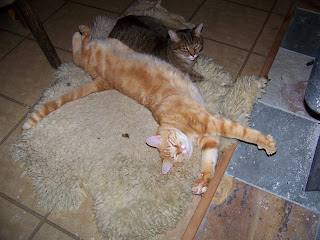 This is Wu practicing heat yoga beside the fireplace.

This winter, the Spousal Unit started taking yoga classes and loved it. I was curious but it was her gig so I waited to be invited. I thought it might be a good balance to the other kinds of things I do, like karate, running, weights, jumping rope and smiting a heavy bag with hands and feet.

Karate and yoga are (very) distant cousins, if some of the legends are right. There's a chance that some of its influence came with Buddhism to China and parts farther east.

I expected it to be a nice, relaxing thing that might help with old injuries, of which there are many. There was some of that to be sure. I did not quite expect it to kick my hind quarters, but that's exactly what it's doing, especially in the power and heat yoga classes. I had no idea that plank asanas or positions were even harder to do than knuckle push ups.

Anyhow, on a recent visit to a public library, I came across a fun and diverting book about the early days of yoga in America, where it was often seen as a suspicious and possibly lewd activity that undermined public morals.

The book was The Great Oom: The Improbable Birth of Yoga in America by Robert Love. The "Oom" in question was P.A. Bernard, a Midwestern kid who ran into an apparently authentic yoga master in turn of the century Nebraska of all places. After various run ins with the law and the forces of decency, he established himself on a spread near Nyack, New York and attracted many prominent Americans in the first half of the century. Bernard was part yogi, part huckster, part ladies man and 3/4 showman.

It's a fun read if you feel so inclined. And I think I'm hooked as far as the yoga thing goes.

AUSTERITY. Cutting budgets in a time of high unemployment is not the best way to deal with the crisis or with long term debt, Paul Krugman argues.

GETTING MEAN. From the UK Guardian, here's a look at how potentially violent far right nativist groups have been energized by Obama's presidency.

HEALTH CARE REFORM. Here are some ideas about how to defend it. 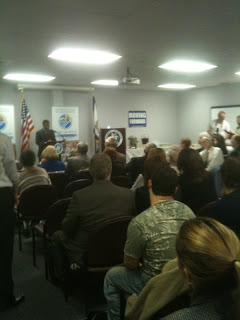 West Virgina residents celebrate the first birth day of the Affordable Care Act. WV Senator Jay Rockefeller was guest of honor, but my picture of him didn't turn out so good.

I never really planned my life this way--not that I'm a huge believer in planning a life--but I've spent over 20 years working on health care issues. Not all the time, thank God, but here and there as threats or opportunities arose.

In several union struggles I tried to support, as far back as 1989, health care for active workers and retirees was a major factor. In the late 1990s, lots of folks here joined to support the state Children's Health Insurance Program, and we've worked to expand it ever since. Then there were efforts to improve or defend the state's Medicaid program.

All the while, though, in the back of my mind and the minds of many others the main goal was achieving universal health care. Yesterday, March 23 2011, marked the first anniversary of the passage of the Patient Protect and Affordable Care Act, referred to hereafter as the ACA. In Charleston, over 100 people gathered to celebrate this milestone.

Let me be the first to say that the act we got wasn't exactly the one I had in mind. The Gentle Reader may have noticed the sometimes vast difference between what one wants and what one gets. Of the different versions of reform kicked around since 2009, I liked the federal House version a bit better than the Senate's. I was disappointed that the public option was eventually dropped. But still, I worked as hard as I could to support the bill we had and would do it all again.

Of course, there was a price to pay in the form of a backlash and a well-funded campaign of misinformation. But one year later, the real benefits are starting to kick in for people in West Virginia and around the country. And West Virginia's senators, including the late great Robert C. Byrd and especially Jay Rockefeller, played a major role in its passage.

The West Virginia legislature, in a session that kind of drove me crazy, did at least take the major step this time around of creating a state insurance exchange, which will lay the basis for major reforms and expansions of care that will happen in 2014.

For all its warts, the Affordable Care Act is already reaching millions of Americans and will reach far more when fully implemented. If it survives, it will be a landmark piece of legislation. In fact, future generations may well wonder why it took so long for a country like the USA to get there.

In the meantime, we need to work to defend it and aid in its implementation.

WOULD YOU BELIEVE dog therapy for law students?

Defeat is no refutation 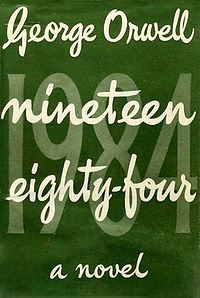 In George Orwell's 1984, the evil O'Brien, a member of the Inner Party, says this to the hapless protagonist Winston:

If you want a vision of the future, imagine a boot stamping on a human face - forever.

What if you knew that was really going to be true, at least for the non-elite (as it seems to me to be some days)? Or what if you somehow knew that humans would fail to address climate change and thus bring about a disastrous future? Would you just give up?

To put it another way, is your interest in working for a better or less bad world based on a realistic hope of getting there or would you struggle on as skillfully as you could without it?

The willingness to continue the struggle without hope is what Tolkien called the "theory of courage," which he felt was expressed in the vision of Norse mythology. According to Tom Shippey, author of The Road to Middle-Earth,

The central pillar of that theory was Ragnarok--the day when gods and men would fight evil and the giants, and inevitably be defeated. Its great statement was that defeat is no refutation. The right side remains right even if it has no ultimate hope at all. In a sense this Northern mythology asks more of men, even makes more of them, than Christianity, for it offers them no heaven, no salvation, no reward for virtue except the sombre satisfaction of having done what is right.

This view of things speaks to my condition on many if not most days. I do believe it is possible with luck and technique and cunning to make some things a little better or less bad here and there. But I have no vision of a utopia or real hope for realizing some final goal of a truly just society and I don't think it's necessary to have either to keep up the fight.

"HAVE YOU NO DECENCY, SIR?" Apparently not. Here's an interesting op-ed on union busting in Wisconsin.

UPPER BIG BRANCH. New federal criminal charges have been filed in the wake of the Massey mine disaster investigation. Here are more details from Coal Tattoo.

CHUPACABRAS are (apparently) mythological monsters--the literal translation of the Spanish word is "goat-sucker." To find out more about such beasts, which are entirely unwelcome at Goat Rope Farm, click here and here.

NOTE: It is with some trepidation that I admit to scheduling this post to appear a few hours in advance so I can reacquaint myself with sleep. The last time I did this, the tsunami hit Japan. I trust (and hope) that there was no causal relation between the two events. If anything really bad happens between now and then, let me state emphatically once again that I was against it.

A theory of courage 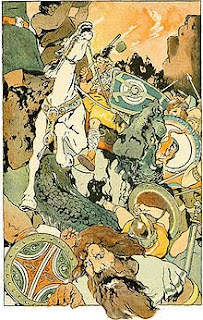 Then the Awful Fight Began (1908) by George Wright, by way of wikipedia.

British writer and scholar J.R.R. Tolkien, in addition to being the author of whole Ring cycle, was one of the 20th century's greatest scholars of Anglo-Saxon language and literature. He was also the author of a famous and influential essay (originally a lecture) on Beowulf, which was called, appropriately enough, "Beowulf: The Monsters and the Critics."

I find it interesting not just for what it has to say about the medieval poem but for his suggestion of "a theory of courage" even in the face of final defeat, something that I think has practical applications for people who care about social justice. We don't appear to be heading for a happy ending, after all.

Like his good friend C.S. Lewis, Tolkien was a pious Christian with a soft spot for paganism, especially the Northern European variety. According to some major strands of that tradition, things are not going to end well. The gods and good men are destined to fight against monsters at the end of the world--and lose. But they are willing to fight on any way with no hope of victory in time or even salvation beyond the grave.

As Tolkien put it in the Beowulf essay,

One of the most potent elements in that fusion is the Northern courage: the theory of courage, which is the great contribution of early Northern literature….I refer rather to the central position the creed of unyielding will holds in the North…..’The Northern Gods’, Ker said, ’have an exultant extravagance in their warfare which makes them more like Titans than Olympians; only they are on the right side, though it is not the side that wins. The winning side is Chaos and Unreason ‘- mythologically, the monsters –‘but the gods, who are defeated, think that defeat no refutation.’ And in their war men are their chosen allies, able when heroic to share in this ‘absolute resistance, perfect because without hope’.

In other words, Tolkien suggests that it is not only possible to carry on the struggle with no hope of final vindication, but that in some ways it is more admirable.

I think I'm with him on this one.

STALKING THE WIND. Here's a new development in the clean energy field: wind power without blades. The idea is for power to be generated by the vibration of wind stalks. 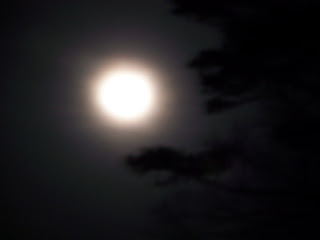 If you got out any over the weekend, especially Saturday night, you probably couldn't help but notice the giant moon. Scientists say this was the biggest full moon in 18 years. All's I know is, when the Spousal Unit and I took a walk in the dark, the moonlight was bright enough to cast a shadow.

It so happened that the Big Moon coincided with said Unit's birthday, although any connection between that blessed event and word associations involving "lunacy" or "lunatic" are purely coincidental. As far as I can scientifically prove.

Looking at the big shining thing made me wonder what life on earth would be like without it being there to shake things up. Would there even be any? That question is above my pay grade.

Another thought that came to mind was the frequent association between full moons and strange behavior that many people who deal with the public swear by. I've heard that this isn't the case, statistically speaking, but no amount of number crunching will convince some folks I know.

Finally, I thought of a line by the medieval Japanese Zen master Dogen, who said, "Enlightenment is like the moon reflected on the water. The moon does not get wet , nor is the water broken."

RECOVERING FROM DISASTER. E.J. Dionne is betting on Japan.