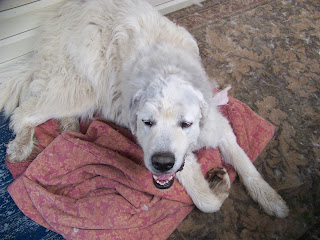 Arpad, the Great Pyrenees security chief at Goat Rope Farm, is hitting a rough patch. When summer approaches, he gets pretty miserable with his long hair. The Spousal Unit generally tries to give him an annual summer shave.

This time around, she had to stop after only partially shaving his head and shoulders. He looks a bit...well...circumcised. For a few days, he's even seemed a little self conscious about his appearance. If he was a character in Game of Thrones, they'd call him something like Arpad Halfshorn and he'd probably live at Winterfell.

We hope to remedy this situation this weekend. Arpad belongs anywhere but in between.
by El Cabrero No comments: 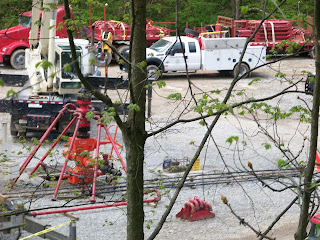 The Latin phrase "cui bono?" can be loosely translated as "who benefits?" I asked that question recently to a resident of a county that is ground zero in Marcellus Shale natural gas drilling, aside from the companies involved. (By the way, there are a lot of different companies involved in the process. It's not like, say a US Steel plant back in the day where one company does the whole thing. One firm may clear pads, another one drill, another frack, another lay pipe, several others haul equipment, sand and water, etc.)

Here are some of the people identified as benefiting:

*the out of state workers who drive, drill, frack, etc.;

*the owners of businesses like motels, convenience stores, restaurants, and other businesses that cater to the industry and those who work in it;

*big landowners who own the mineral rights to their own land--something that doesn't happen as often as you might think--and who can locate some well pads far enough away from their living quarters to generate some income without ruining their quality of life. Ditto absentee owners.

I had a conversation with a union official yesterday asking about whether local and/on union workers (preferably both) were getting anything out of it. He said that some were, particularly in the pipeline end. Some unions represented at various points in the process are Laborers, Operating Engineers, and Teamsters, with some others.

I'm glad there are some winners outside CEOs and stockholders. But I'd like to see the numbers increase. Better regulation, more protections for the environment, more transparency, more efforts to hire local workers would be a start.

At the risk of being a broken record, West Virginia as a whole could be a winner if we set aside some of the revenue from natural gas to create a Future Fund to help transition our economy beyond mineral extraction.


LIES, TRUTH, THINGS UNSAID AND THE POLITICS OF COAL. Here's a great post from Ken Ward's Coal Tattoo that lays it all on the line.

CHIMPS have culture. And some plan ahead when it comes to stone throwing. 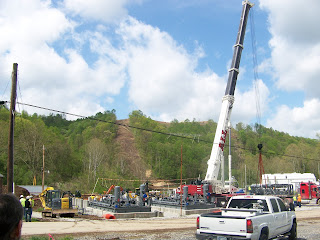 "Externalities" is an economics term that is often forgotten by worshipers of the market god. An externality is a kind of market failure, an example of a situation in which markets aren't efficient. The most troubling kind is a negative externality, which occurs when the costs of a particular kind of business aren't borne by either the buyer or seller and don't show up on the bottom line. Instead, they are passed on to someone else, often the public, which typically has to clean up the mess if it is going to be cleaned up at all.

I kept thinking about negative externalities while driving around Marcellus Shale natural gas drilling in northern WV. One example are the roads that are chewed up by heaving trucks hauling equipment in and out. Then there is the carbon emitted from the wells and drilling and transport process. Then there are all the nasty chemicals that show up in air, water, and solid waste. Then there is the noise pollution and diminished quality of life for people who live near the operations. Then, what kind of health effects are going to show up down the road? Etc.


WHAT IS IT GOOD FOR? Support for the war in Afghanistan is at an all time low.


A PARADIGM SHIFT in global economic thinking? Maybe, but it hasn't hit here yet.

IN POLITICS, who needs facts?

WHAT ABOUT GOLIATH? An archaeological dig in Israel may shed like on biblical King David's time.

I WANT ONE. Scientists have discovered fossils of a "mini-mammoth" that stood about three feet high. 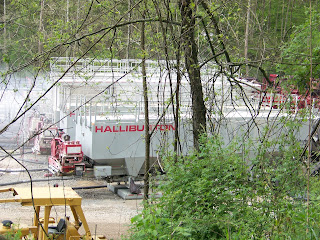 People have been talking about the Marcellus Shale natural gas boom for a few years in WV. So far, most of it has been taking place to the north of my  normal stomping grounds but I made a visit last week to see how it hit Wetzel County, which sits right at the base of WV's northern panhandle.

Aside from the Ohio River border, most of the county is pretty rural and was relatively bucolic, the operative word being was. Now the countryside has been torn up along with the highways as well pads, frack ponds, and pipelines go in all over the place.

Fracking or hydraulic fracturing is a term you hear a lot in conjunction with shale gas drilling. It refers to the practice of pumping water, sand and chemicals into horizontal wells thousands of feet underground. Actually, fracking is only one of several steps along the way.

As I understand it, the whole process consists of site preparation (they call them pads), which I've heard called "mini mountaintop removal sites." Basically it means clearing and leveling an area of several acres. Then comes the drilling, which goes down thousands of feet vertically and then moves horizontally across the layer of shale in which the gas is trapped. Then they "seal" the shaft by pumping concrete in to supposedly protect ground water and aquifers from contamination. We all know that concrete never cracks, right?

Once the well is dug, an explosive charge is detonated along the horizontal shaft to break up the shale. After that the fracking is done, in which several million gallons of water, sand and God knows what kind of toxic stuff is pumped in at high pressure to help release the gas. About half of the frack fluid stays in the ground; the rest has to find a home somewhere else.

Once stuff starts coming up the drill shaft, the next step is flaring to eliminate waste gas. Once the gas is good to go, it is pumped along pipelines with the help of natural gas  compressors. I'm sure I left out a few steps. All this involves thousands of tons of traffic on rural roads and lots of noise, besides concerns about air, water, solid waste and hazmat contamination. In a word, it's a mess. And, yes, lots of jobs are involved, but most of those go to out of state workers.

The WV legislature created some pretty good draft legislation, but it was "tweaked"--some would say gutted--by Gov. Tomblin. More regulation needs to happen if the political will can be generated. And we need to create a future fund from natural gas and other severance taxes to make sure WV gets a little something out of this mess.

PRIORITIES. Here's a good op-ed by a friend of mine which makes the connection between huge cuts in state corporate taxes and possible cuts in child care for low income working families. Unsportsmanlike conduct, I say.

HARD TIMES. Here's a sneak preview of Paul Krugman's latest book on the messed up economy.

FLEAS. Dinosaurs had em. Big ones.

SPEAKING OF GAS, the dinosaurs apparently had plenty of that too.

It looks like this weekend's elections in France and Greece threw a monkey wrench into the austerity machine. I wonder whether American politicians will get the message. Here' s more on that from Krugman.

MORE FALLACIES FROM THE ONE PERCENT, specifically about taxes, discussed here.

TRAMPS LIKE US, maybe we were born to run. 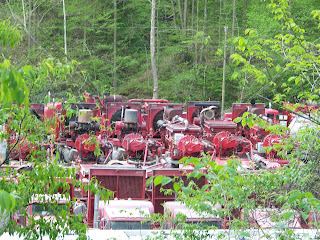 I happen to be from a place that is north of the southern coalfields but south of the northern gas fields, for the moment anyway. Which is just fine with me.

SPEAKING OF WHICH, there's lots of frack traffic in the news these days. Last week, the Obama administration called for stronger regulations and more disclosure of shale gas drilling. Here's a look at the economics of the industry. And here's news about a report that suggests that water table contamination from shale gas drilling is a real danger.

I hate to say this--and I really hope I'm wrong about it--but sometimes I think that in the end the gas industry will do more harm to this state than its illustrious carbon predecessor.

BUT TO STAY ON MESSAGE, let me say again that WV would be nuts not to create a Future Fund from natural gas severance tax revenues so that our economic future will be better than the past.