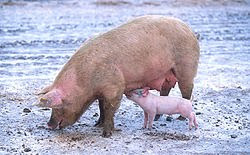 It's official. El Cabrero has been diagnosed with swine flu. So far it's not that bad, at least in comparison with having one's chest split open or getting a catheter you know where.

I had a whole bunch of things scheduled for yesterday into the week ahead but sometimes you get a time out. To paraphrase Emily Dickinson, because I could not stop for it, it kindly stopped for me.

Regular posts to resume soon.
by El Cabrero No comments: 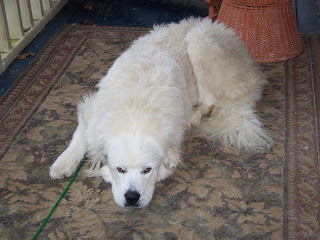 We interrupt our regular program to announce that our Great Pyr Arpad, aka Vanilla Iceberg, was located after spending two nights in an undisclosed location. The Spousal Unit found him while checking out some backroads, when he heard the car and ran out of a garage. He even jumped into the car, an action that usually requires an act of Congress.

The gentleman who had been hosting him said "I ain't never seen a dog that big. I been calling him Snowball."

We are glad to have him back and devoutly hope that the 170 wanderer didn't eat anybody important.

Meanwhile, El Cabrero seems to be developing flu-like symptoms, not necessarily of the swinish variety (although others may have their own opinions). It's always something. If posts are sporadic over the next few days that might be why.

CORRECTING THE BIBLE. Here's another item on the conservative effort to excise "liberal bias" from a certain book.

JOHN BROWN'S BODY. Here's the Washington Post on the man who lit the spark.

CHIMPS HELP, especially when they're asked. 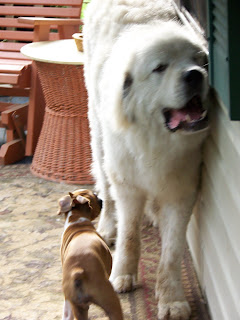 Random animal picture. Arpad, the big white boy on the right, has been missing since Monday.

Health care reform efforts cleared a major hurdle yesterday, when the Senate Finance Committee approved its plan to revamp the system. While the bill is way better than nothing, it could still be improved. Here is the introduction to an analysis by Robert Greenstein of the Center on Budget and Policy Priorities:

The Senate Finance Committee’s approval of an ambitious health reform plan marks a major step toward enactment of legislation to extend health care to tens of millions of people who lack it, strengthen insurance protections for millions more who are underinsured or face exorbitant charges, and begin to address the nation’s most serious fiscal threat — the relentless rise in health care costs.

The Congressional Budget Office has reported that the bill would modestly reduce the budget deficit both over the next ten years and beyond. This is a fiscally responsible bill that would redirect federal spending and tax subsidies from less productive uses elsewhere in the health care sector. (Read: http://www.cbpp.org/cms/index.cfm?fa=view&id=2920)

While the committee package represents a vast improvement over the current health insurance system, it has some serious shortcomings that likely would limit its effectiveness in certain areas. Because the health reform bills approved by the Senate Health, Education, Labor, and Pensions (HELP) Committee and three House committees are stronger in those areas, policymakers should blend the best provisions from these bills as they move forward.

The rest is worth a look.

THIS IS GOING TO GET UGLY. A public hearing on changes to the mountaintop removal mining permit process got loud and nasty in Charleston. As I've said before, I really hope I'm wrong but it wouldn't surprise me if somebody gets killed before all this is over.

A LITTLE MORE CIVIL was this public forum on health care reform the same night.

PAY CUTS are another feature of working life in the Great Recession.

A VISIT WITH THE DOCTOR. That is, bluegrass legend Dr. Ralph Stanley.

WHO ORDERED THE GIANT SNAKES? They're here.

It's easy for this guy to be green 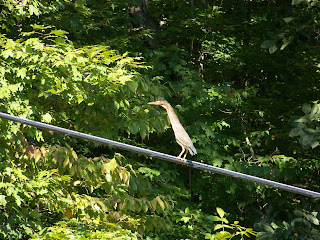 Today is a long day on the road, so in lieu of the usual rant here's a picture of a green heron that showed up at the farm the other day. He was not quite as majestic as his great blue cousin who showed up yesterday when I didn't have a camera handy. In fact, he seemed kind of goofy looking at times, but a heron is a heron and I'll settle for any of them.

And here are some things I found to be interesting...

AND HERE'S ONE REASON WHY. This New Yorker piece looks at why unrestrained markets can be so crisis prone--and why real reform is needed.

WHILE WE'RE AT IT, let's take another look at trade deals.

A MISSTEP? An insurance industry report aimed at derailing health care reform may have missed the mark.

YOUR FEET'S TOO BIG. The world's biggest dinosaur footprints (so far) were found in France. They were something like a 1.5 meters in diameter. I'm not even going to guess what shoe size that would be.

Be ye lamps unto yourselves 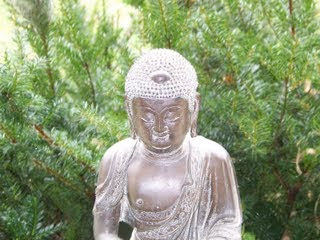 El Cabrero has often fessed up here to his soft spot for Buddhism, for both family and personal reasons. As world religions go, it seems to be a good bit less bloodthirsty than most, particularly those of the monotheistic variety--and I say that as a member of one of the latter.

One of the things I like about it is the way the historic Buddha told his students not to accept anything on the basis of faith or authority but to investigate things for themselves. On his deathbed, he assembled the monks and told them that the important thing was the dharma or teaching, not the teacher. He urged them to be lamps and refuges unto themselves.

I just finished reading a book about a self-identified Buddhist community that seemed not to have gotten that memo. Here's a short version: a leader of a New Age group was "recognized" by a visiting Tibetan lama and was said to be a tulku or reincarnation of a spiritual teacher. The group set up a community that was more of a personality cult than a Buddhist center. Families were broken up; money misappropriated; at least one student was physically abused (not to mention questionable conduct by the leader who was regarded by members as a holy being who could do no wrong).

The saddest part wasn't that the person in charged abused authority. After all, there are spiritual as well as sexual predators (and often they are one and the same). The saddest part was that otherwise intelligent people surrendered their critical thinking in unquestioned obedience to a leader whose every action, no matter how arbitrary, was said to be have been undertaken to "save sentient beings." Kind of like a domestic abuser who only hurts family members "for their own good."

And for all the talk of saving sentient beings from suffering, it didn't seem like a whole lot of that was done in any practical sense.

The problem with this kind of unthinking obedience to any human or human institution (even those claiming to be divine) is that once you give it, it's only a matter of the luck of the draw whether one obeys a Hitler, a Stalin, or the Dalai Lama--and I'm pretty sure the Dalai Lama would agree. You've thrown away the only thing that can distinguish between them.

I feel another Dylan quote coming on--one the real Buddha would have approved of. It's called Trust Yourself and it's from Empire Burlesque. Here it is:

Well, you're on your own, you always were,
In a land of wolves and thieves.
Don't put your hope in ungodly man
Or be a slave to what somebody else believes.

FROM BAPTISM TO AFGHANISTAN. It's all there in the latest edition of the Rev. Jim Lewis' Notes From Under the Fig Tree.

SCHOOL OF COAL. Here are two items on the controversy over Marsh Fork Elementary School and Massey Energy

SHOPPING AND/OR CITIZENSHIP? Here's an item on ethical consumption and its limits.

CHEW ON THIS. British chef Jamie Oliver is bringing his reality TV show to Huntington WV, just a half hour or so away from Goat Rope Farm, after that city was declared the most unhealthy in America. Two things that jumped out at me were the 15 pound hamburger from Hillbilly Hot Dogs and the person who had this show confused with American Idol.

NOT THAT ANYONE HAS ASKED FOR MY OPINION, but as President Obama mulls over the future of US involvement in Afghanistan, I keep thinking about Alexander the Great's exit strategy: marry a princess, declare victory, and get the hell out of there.