The uses of adversity? 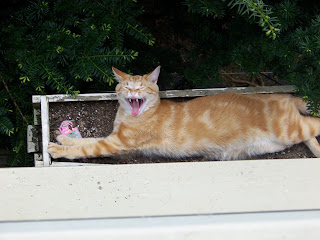 Wu prefers to sleep through hard times, which may not be a bad idea.

It is an article of faith in some circles that going through hard times brings out the best in people. In many myths, books and films, the hero or heroine must undergo an ordeal to achieve greatness. There are all kinds of popular sayings to the same effect, as in "no guts, no glory" and "no pain, no gain."

I do not entirely agree. Misery, as they also say, loves company. The world is full of unnecessary or preventable suffering, which usually only leads to more of the same. Given the choice, I'd rather get rid of it.

Then there are those who seek for some deep and perhaps cosmic purpose in human suffering and insist that it is all somehow for the best. Voltaire did a great job of skewering that viewpoint in his hilarious little novel Candide, and far be it from me to try to improve on that masterpiece.

I find that kind of cosmic optimism to be a real downer. For the record, I can't imagine a more depressing thought than the idea that this is "the best of all possible worlds."

Still there are some bullets that can't be dodged. In such cases, tenacity can be a virtue. And it really is sometimes true that going through tough periods can build a kind of endurance. Nietzsche famously said "What does not destroy me makes me stronger" (although the evidence often leans in the other direction). Sometimes telling yourself that can help a bit.

So can having some kind of goal or purpose, as Holocaust survivor Victor Frankl argued in Man's Search for Meaning (search the Goat Rope archives in the upper left hand corner for an earlier series here on his ideas). To quote Nietzsche again,

He who has a strong enough why can bear almost any how.

WORKS FOR ME. In the wake of the financial bailout, the union SEIU has proposed organizing bank workers.

I COULD HAVE TOLD THEM THIS. Scientists have discovered that dogs have what seems to be a sense of fairness and are capable of envy. Perhaps they might have discovered this sooner if they'd have tried the novel experiment of giving food or treats to more than one at a time. My theory is that they can even do a kind of canine arithmetic in which they quantify the goodies and express disappointment if the balance doesn't add up.

I COULD HAVE TOLD THEM THIS ONE TOO. Research indicates that aging brains may be easily distracted. What was their first clue? And what were we talking about, anyway?

IN OTHER URGENT NEWS, vampires are cool again (or still).