One book that has recently found its way onto my pile is The Locust Effect: Why the End of Poverty Requires the End of Violence by Gary Haugen and Victor Boutros. The book highlights how predatory crime and violence and the lack of effective law enforcement contributes to misery for the world's poor.

The focus of the book isn't so much on war and organized armed conflict as much as "ordinary" violence, domestic and otherwise. It's an angle I must admit that I hadn't thought much of  before.

The book also contains a primo definition of poverty:

I recall the way an old history professor of mine defined poverty: He said the poor are the ones who can never afford to have any bad luck. They can't get an infection because they don't have access to any medicine. They can't get sick or miss their bus or get injured because they will lose their menial labor job if they don't show up for work. They can't misplace their pocket change because it's actually the only money they have left for food. They can't have their goats get sick because it's the only source of milk they have. On and on it goes. Of course the bad news is, everybody has bad luck. It's just that most of us have margins of resources and access to support that allow us to weather the storm, because we're not trying to live off $2.00 a day.

Congressman and former vice presidential candidate Paul "Ayn Rand" Ryan was in West Virginia recently campaigning for Shelley Moore Capito in her bid for the seat of the retiring Senator Joe Rockefeller.


According to Ryan, Capito will help get rid of the Affordable Care Act, which  has brought Medicaid coverage to around 134,000 working West Virginians since Jan. 1, not counting another 40,000 or so who got coverage under the ACA in other ways. In fact, the law that Capito will presumably get rid of has made WV one of the state's with the lowest rate of uninsured residents, as noted in yesterday's post and resulted in huge savings for the state's largest hospital system..


FIGS, ANYONE? Here are the latest musings of my friend the  Rev. Jim Lewis at Notes from Under the Fig Tree.
by El Cabrero 1 comment:

As Paul Krugman points out in today's New York Times, the Affordable Care Act is significantly failing to fail, although you might not know that by following the media. One place where that is especially true is El Cabrero's beloved state of West Virginia. According to this article from last weeks Charleston Daily Mail,

West Virginia now has the sixth lowest uninsured rate in the country.

In 2013, for example, five to seven percent of CAMC patients were uninsured. In Jan. 2014, the percentage dropped to 1.7 percent and is now around 1 percent. This could mean:

*a $20 million or 35 percent drop in charity care from one year to another;

A lot of credit for all this goes mainly to Gov. Earl Ray Tomblin, who made the call to expand Medicaid in May 2013. But it also should be noted that the WV Department of Health and Human Resources has done a magnificent job of signing people up.

To paraphrase Joe Biden, it really is kind of a big....deal.
by El Cabrero No comments: 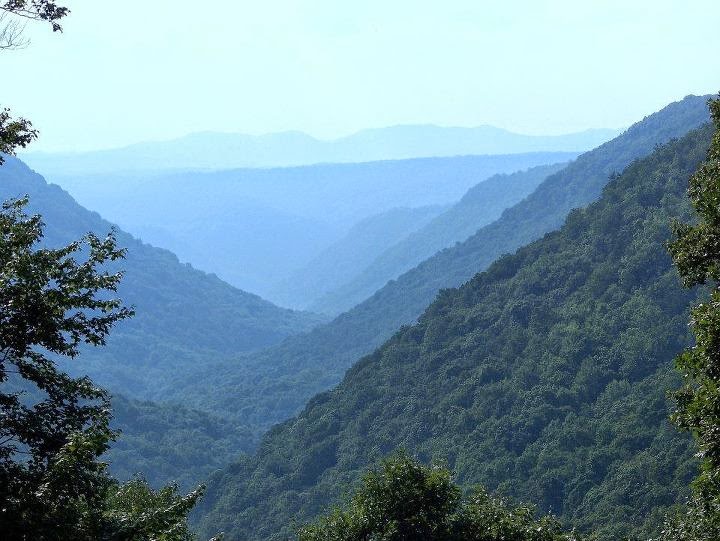 It's been a rough patch lately, so it seemed like high time when the Spousal Unit and I took last week to head for the hills, literally. We spent a week in a little cabin along Glade Creek in Babcock State Park. Thereabouts, the mountains did their magic. A week of hiking, jogging, biking, reading, rafting, zip-lining and such around the New River Gorge was quite restorative.

Back to the salt mines...
by El Cabrero No comments: