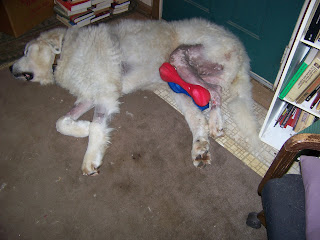 Some time back I reported that Arpad, our Great Pyreness and official Goat Rope Farm security chief, suffered from a broken leg. After surgery, things looked better until the bone apparently slipped apart.
It was bad. Real bad. Even a vet I know got queasy when he saw it.

The latest is another operation which entailed God knows how many metal rods going in and through the bone. He can get around amazingly well considering. He seems to be in discomfort although he's getting pain meds.

And getting through airport security is totally out of the question...

It's sad to see a good Pod down. It reminds me of the suffering of Aslan in The Lion, The Witch and The Wardrobe. I'm also amazed and inspired by how brave and stoical he is.  But I'm hoping things will go better this time.
by El Cabrero 3 comments:

Of plague and such 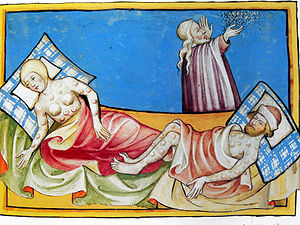 The extensive staff of this blog searches day and night for items of possible interest that would cater to a reader's every whim. That's just how we rock em.

The latest example of this is this item about an anthropologist who studies medieval skeletons to learn more about the Black Death. Interestingly, people seemed to live longer after the plague was over, possibly because it weeded out the weak and possibly because living standards went up in a less crowded world.

That really was an example of supply and demand in action. After the 14th century pandemic, so many people had died that demand for labor exceeded supply and wages for survivors went up. I'm guessing there was plenty of unoccupied housing to be had as well.

While El Cabrero is all about improving conditions for workers, I think I'd prefer it to happen without such drastic measures in 21st century.

ANOTHER WHACK to supply side economics is delivered by Jared Bernstein here.

WONKY BUT IMPORTANT. Economist Dean Baker looks at the minimum wage as an anti-inequality measure here.

TALKING COAL. Here's a thoughtful article from the State Journal about the downturn in coal employment and what might be done about it.

Although it has taken an extraordinary amount of self control, I have managed to blog for several days without mentioning zombies. It was more than I could do, however, to refrain from drawing attention to a recent NPR story about a new kind of running event.

Called "Run for Your Lives," it involves a 5K obstacle course whereat runners are chased by by zombies. Or people dressed up as zombies anyway.

It's pretty popular. When the first event was held, 12,000 people showed up. People signing up for the races can choose to be either runner or zombie, although zombie is the more popular role.

Runners are not allowed to shoot zombies in the head or otherwise compromise their craniums, the preferred movie method of dispatching the walking dead. Nor are zombies allowed to eat runners, although they pursue them diligently if clumsily and can pull off special flags from the runners to show they could have caught them.

There's even an ap for it.

If my over-educated zombie obsessed daughter finds out about this, it's going to be on.

SPEAKING OF RUNNING, don't forget the yoga (just do it in a zombie-free area).

FEAR LESS by expressing it more.

A FUNERAL ALTERNATIVE? This NPR story about Zoroastrian funeral customs caught my eye. Apparently a shortage of vultures in India is causing problems. We seem to have quite a few here, however.

In an earlier post, I complained that one of the downsides of attending my grandson's little league football games was getting a cheer stuck in my head the same way irritating songs often do. The cheer in question is discussed here and involves apples, bananas, the state of Alabama, lies and truth.

This week, however, there was a different problem. The team lost big time, as usual, but the cheerleaders held their own...but they did it without using the cheer even once. I'm somewhat embarrassed to admit that I kind of missed the it.

It was like being at a Men Without Hats concert and finding that the band refused to play Safety Dance.

It really is always something.

WHAT'S UP FOR WORKERS. Here's a look at the latest State of Working West Virginia report.

REBUILDING THE MIDDLE CLASS. Here are some ideas.