An Enemy of the People...

...is the title of a play by Ibsen about an otherwise well-regarded doctor who becomes a pariah when he discovers that the waters on which his home town's economy is based are poisonous.

Good thing nothing like that could ever happen in El Cabrero's beloved state of West Virginia, huh? I mean, the idea of someone catching some flack for being insufficiently servile to a major industry is way too far-fetched in this day and age...

Here's just one example of how those who dance to the masters' tune spin things around here. The headline of the print version of The State Journal, a business publication, blares "Rockefeller Blasts Coal, Lauds EPA," which, to the ears of those who run this state, is the equivalent of "Rockefeller Dropkicks Jesus, Gives Obama-style fist bump to Satan," only worse.

If you actually read what Rockefeller said, it's pretty clear that he wants the industry to have a place at the table for years to come, but facts don't matter around here. I'm afraid things are going to be pretty ugly here for a stretch.

The sad part is, things are going to be tough enough anyway. WV has a tough transition to go through, thanks as much to market forces and competition with natural gas as to anything else. Excessive rhetoric, denial and blind resistance aren't going to help.

This one's for Confucius

When the great ancient Chinese sage Confucius (aka K'ung-fu-tzu) was asked what he would first do if he came into an important government office, he said he would commence by "the rectification of names."

Confucius thought, and I'd have to say that I agree, that a great deal of the evil in the world comes from calling things by the wrong names--and that fixing that would be a big step in setting things right.

These days, one hears a lot of politicians talking about the need of making "tough decisions." This usually translates into taking steps that harm low income and working people while protecting the wealthy and powerful. A case in point is the decision by the Tomblin administration in West Virginia to cut child care and other programs that help ordinary West Virginians.

Here's the deal: kicking people who can't kick back isn't a tough decision. It is a chicken **** decision.

And say what you want about me, I know a thing or two about chicken ****. We've got plenty of it right here on the farm. I could post plenty of fresh pictures of it right here. And it's much more excusable when it comes from real chickens in the ordinary process of digestion than from human beings who should know and do better but don't.

Read up on this here and here.

Meanwhile, word on the street is that the real reason why programs for working people are being cut is because of the mess-ups of highly placed folks at the state Department of Health and Human Resources, whose mistakes are costing millions of dollars and who are passing their own screw-ups on to defenseless children and families.

To quote Shakespeare: "Shame, and eternal shame, nothing but shame!"

Today is the 149th birthday of El Cabrero's beloved state of West Virginia.  We've probably seen worse days here, but we sure has hell have seen better ones. By chance, two state related items caught my eye today that deal with some ugly aspects of the current scene here.

These days, it seems that some of the state's leading politicians are given to cowardly pandering to the coal industry and, however indirectly, to racist elements. The song they are dancing to goes something like this: the Obama administration, which happens to be led by a black man with a strange name, is waging an unprovoked and all out war on coal through its diabolical Environmental Protection Agency.

West Virginia native Michael Tomasky has a great piece in The Daily Beast that confronts the racism factor head on.


And it was really refreshing to see that our senior senator Jay Rockefeller was channeling a bit of the late great Robert C. Byrd and calling on the coal industry to tone down its war rhetoric. Here's a link to his speech on the Senate floor.

I can't imagine either Senator Manchin or Governor Tomblin ever having the guts to say anything remotely resembling that. Besides, Tomblin is too busy cutting child care benefits for working families anyway.

So happy 149, West Virginia. And may 150 be a bit less cowardly and ugly.
by El Cabrero No comments:

To paraphrase a line from Hamlet...

"...madness in great nuns must not unwatched go." In this case, however, the madness is really righteous indignation.

Here's the deal: a group of Roman Catholic sisters are traveling over 9 states to highlight the harm the House Republican federal budget would do to vulnerable families. I hope they metaphorically whack a few knuckles with a ruler like the nun did in the old Blues Brothers movie. 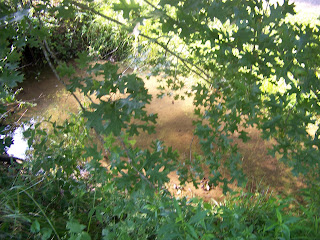 I always thought there was something particularly appropriate about Shakespeare's linking of mercy and rain in those famous lines from The Merchant of Venice:

The quality of mercy is not strain'd,
It droppeth as the gentle rain from heaven
Upon the place beneath.


It's been a hot and dry stretch around Goat Rope Farm until yesterday. The word drought was crossing my mind. The creek, which for me is a barometer of the state of the world, was drying up and, while it had water here and there, no longer flowed continuously. The Spousal Unit even rescued some stranded minnows.

Then yesterday, the rains came. Mostly slowly, off and on, 20 minutes here, 30 there, with an occasional cloudburst through the night. Then, as unlikely as it seemed a day or so before, the creek was back. So may it always be.

PRISON REFORM. The state of WV has contracted with the Justice Center of the Council of State Governments to study and make recommendations about dealing with prison overcrowding. Here's hoping it leads to action.


MAGICAL THINKING. Everybody does it.


COOL RANT. Here's another great post on the politics of coal  from last week at Ken Ward's Coal Tattoo holding forth on the latest from WV's junior senator.