Message for the faithful

Here's a message for the faithful
what is it that you cherish
to find the Way to see your nature
your nature is naturally so
what Heaven bestows is perfect
looking for proof leads you astray
leaving the trunk to search among the twigs
all you get is stupid--Han-shan, 9th century Chinese poet 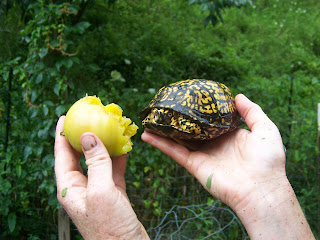 A suspect was recently apprehended following a series of tomato theft and vandalism incidents in the vicinity of Goat Rope Farm. The unsub (that's crime buster lingo for unidentified subject of an investigation) refused to identify himself or to issue any statements.

Due to the absence of witnesses, formal charges were not pressed. He was, however, dropped off in the middle of a field about a half mile down the road.

SPEAKING OF FARMS, here's a dispatch by Michael Pollan on the food revolution.

CREATING JOBS. One provision of the Recovery Act has created hundreds of thousands of jobs nationwide in both the public and private sector.

SPEAKING OF WHICH, a new report shows the Recovery Act aka stimulus played a major role in the economic recovery.

HIRE THE LADY. Paul Krugman gives the Obama administration a friendly thrashing here and urges that Elizabeth Warren be given the post of the new bureau of consumer protection. Not that anybody cares, but I concur. 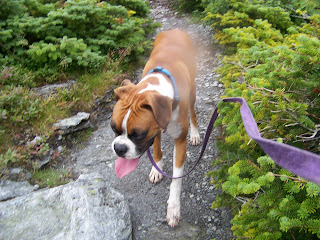 El Cabrero just got back from a visit to the in-laws in Vermont. Every time I go, I try to take a side trip to hike up Mount Mansfield, the state's highest mountain. This year, I also wanted to see how little Edith Ann would do on the trail. She turned out to be a natural climber. 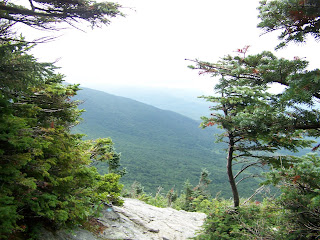 The trail I use is "only" 3.3 miles to the summit, but those would be headed largely in an upward direction. The trail starts out in the woods 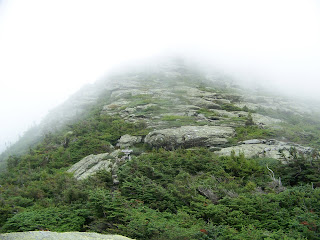 but as you go up, the trees get smaller and smaller and give way to mostly rock. It's a bit like climbing up a demonic stairway built by ancient Greek Cyclopes. I had to skitter up lizard style at a few points. 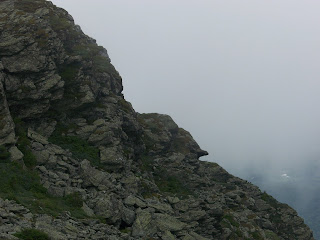 The trail is such that it is hard to see just how far away and up there the summit is most of the way, which is probably a good thing. 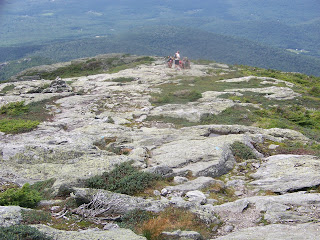 Going down is less demanding on the legs, lungs and ticker but can be more dangerous. You have to make every step consciously to avoid a nasty fall. I'm not sure why I'm drawn to this mountain so much. It wouldn't be exact to say that I enjoy the climb--it kind of a pain at the time--but I enjoy having climbed it.

NOT A RAVE REVIEW. Massey Energy CEO Don Blankenship was the subject of this op-ed in the Washington Post.

SOMETHING ELSE TO DENY. NOAA just released a report on the state of the climate.

"THE RECESSION GENERATION." Effects of the current downturn on children could be long lasting.

LAST AGAIN. El Cabrero's beloved state of West Virginia didn't come off too good in a recent ranking of states in terms of wellbeing.

It's always nice to come back from traveling to find the farm still standing and most of the critters alive and well. I'm playing catch up now, but here are a few links that caught my eye lately.

GREED AND COWARDICE get the blame for the US Senate's failure to deal with climate change, according to Paul Krugman. And while I'm not always on the same page as globalization cheerleader Thomas Friedman, I think he was right here. At times like these, I really miss WV Senator Robert Byrd, who was probably the only prominent politician in West Virginia who would or could have played a positive role on this issue.

I don't find it particularly comforting to think that most people alive now will be able to see how wrong the denial industry is/was about this.

A GOOD FIT. Here's hoping Elizabeth Warren gets the not to head the new bureau for consumer protection.

There must have been something in the air or water around the 5th and 6th centuries BC because the human race did some of its best thinking then. I'm thinking the Buddha, Lao Tzu, the Hebrew prophets, Aeschylus and the whole crew. The centuries around that time are often referred to as "the Axial Age."

Here's another timely thought from our old friend Confucius:

Note: I'm still on the road. Regular posts with links and all should resume tomorrow.
by El Cabrero No comments:

El Cabrero is still on the road but in lieu of trail mix, here are some quotes from Confucius:

Those who go wrong by holding back are few.

Hear the Way in the morning and it won't matter if you die that evening.

What you do not want others to do to you, do not do to others.

Zigong asked, Is there a single word that can guide a person's conduct throughout life? The Master said, That would be reciprocity, wouldn't it?

NOTE: I'm still on the road so there ain't no links. Back soon
by El Cabrero 1 comment: