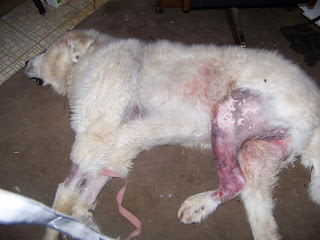 I am sad to report that Arpad, security chief at Goat Rope Farm, had a losing argument with a motor vehicle (he didn't start it) and will be taking a couple of months off from active duty. It really pains me to see the Big Boy in such pain. He had a broken tibia which required surgery to repair. As you might imagine, persuading him to get up and go outside to answer the call of nature is an ongoing challenge.

Fortunately, the vet said he should make a full recovery.

MAKING IT PLAIN. Here's Robert Reich on the Ryan budget and why it is the Mother of all Bad Ideas.

El Cabrero is kind of slow on the uptake, especially about social media. After several years, I think I'm finally figuring out some uses for Twitter (especially good for breaking news and for contacting journalists).

Facebook is another story. I've used a few pages for work stuff. There is the American Friends Service Committee WV page, which I am really bad about updating. During the recent (and ongoing) struggle over child care cuts, this page was helpful in generating emails to the governor's office and such. I have higher hopes for the WV Future Fund page, which we hope will generate interest in creating a permanent mineral trust fund for WV, although we really haven't gone public with it yet.

Then there's the personal FB stuff. I rarely put anything on there but I do check it occasionally. It occurs to me that I don't really know quite a few of the people I've "friended."

But there's one thing I really don't get. It would seem to me that if you wanted to make a statement on Facdebook, you should do so as clearly as possible, put it out there, and let it stand for a while. I have noticed, however, that some people have something like diarrhea of the fingers, posting picture after picture after comment over and over and over and over and over with no break between. Usually these posts aren't personal statements but pictures or cartoons produced by God knows whom.

I think this is where the law of diminishing returns kicks in. The more you put out in a short time, the less anybody is going to pay attention to any particular item. Methinks some people should give those fingers a break.

WHACK AWAY. Here's Paul Krugman taking swipes at two of my favorite targets.

ONE GOOD WHACK DESERVES ANOTHER. Here's George Lakoff on the Devil's budget.

A new report by the Natural Resources Defense Council estimates that around 40% of US food is wasted, which is bad but doesn't surprise me too much. Here are some factoids about it:

*The amount of food wasted is the equivalent of 20 pounds per person per month;

*Wasted food rotting in landfills accounts for about 25% of US methane emissions; and

*Reducing waste by 15% would be enough to feed 25 million people.

Waste occurs at every step of the way, from production to post harvest handling and storage to processing and packaging to distribution to consumption, and different food products experience different degrees of waste along the way. However, it most waste occurs in the consumption stage, which includes in home and out of home use.

The report includes plenty of recommendations to reduce waste at every stage.

(It occurs to me, however, that there'd be a lot less wastage if people had chickens and such. Not to mention composting. And let's not forget actually eating it.)

If you don't want to read the whole report, here's the CNN story.
by El Cabrero No comments:

You can't be around most WV politicians very long without hearing about the Obama administration's "war on coal." According to this scenario, the EPA is a rogue agency totally bent on destroying the inoffensive industry and everything would be just peachy without it.

This post from the WV Center on Budget and Policy suggests that regulations aren't the main problem here.

Meanwhile, this post by Beth Spence reminds me that the same people jabbering on about the "war on coal" are the same ones who could make meaningful mine safety legislation pass--but they can't be bothered to do that.
by El Cabrero No comments:

Here's a little video that various AFSC staff worked on to explain why West Virginia needs to create a Future Fund, also known as a permanent mineral trust fund.

NATURAL GAS AND CLIMATE CHANGE. Here's a look at how one might affect the other.

WOULD YOU LIKE TO HAVE EYES IN YOUR NETHER REGIONS? This butterfly does. 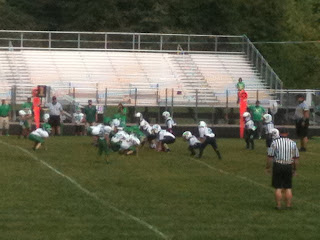 Allow me to explain. My grandson recently starting playing little league football. I've been to two games so far. The cheerleaders seem fiercer than the players on his team, so far anyway. And one of the cheers has wormed its way into my brain like some kind of tropical parasite.

Here's how it goes:

Big fat apples, skinny bananas
We're the girls from Alabama
That's a lie, here's the truth
We're the might Panthers
Aren't we cute?

Both my daughter (a former raging cheerleader) and the Spousal Unit think this is the Best Cheer Ever. I'm ashamed to say we even make up various Spanish versions of it. The saddest part is, I know the hand moves that go with it.

FROM CURSE TO BLESSING. Here's my latest rant in the Gazette. This one is about how WV needs to change the mineral extraction game and create a Future Fund.


THE SCARE IN MEDICARE. E.J. Dionne's got this one.

WHAT THE WORLD NEEDS NOW is a better toilet?