It's hard to believe that barely 14 months after the Freedom Industries chemical spill trashed the water of 300,000 West Virginians the state legislature would vote to roll back last year's unanimously supported bill.

(And, yes, I would hate to diagram that sentence.)
by El Cabrero No comments:

This op-ed of mine ran in today's Gazette. The $100K breakfast thingie was a gift from the gods.

I was a little disappointed when a $100,000 per plate conservative breakfast fundraiser in Charleston was canceled.

To tell the truth, I was kind of hoping a waiter would take a picture. I’ve always wanted to see what a meal that costs as much as a West Virginia house would look like.

That’s also as much as the annual household income for two typical West Virginia families and more than enough to pay tuition and fees for 14 full-time students at WVU for a year. It would also be enough to pay rent at the state median monthly rate of $620 for 161 months or almost 13 and a half years.

Even after our state raised the minimum wage in January, a worker earning it would have to work 12,500 hours to get in.

One would hope they’d at least serve some decent taters …

Apparently organizers got a little nervous when the story hit the media.

That incident shows what a little sunshine can do to the dark money flooding state politics and threatening democracy.

The state Senate Judiciary Committee chose the path of sunshine when it came up with bipartisan compromises on SB 541. On the one hand, it raised the amount that can be given to a candidate for office to $2,700 per election (That would be 1/37 of the cost of a big ticket breakfast, but I digress). On the other, it provided sunshine by requiring disclosure of contributions, including those by third-party groups.

As Senate Majority Leader Mitch Carmichael eloquently put it, “We want full disclosure, full transparency and full accountability. We want to put control of the message back in the hands of the candidate.”

The bill passed the Senate by a margin of 28-6.

Unfortunately, the lights went out in the House Judiciary Committee, where the disclosure provisions were eliminated.

Not surprisingly, the senators who worked out the compromise legislation were not amused. Senate Minority Leader Jeff Kessler was quoted in the Gazette as saying that “The only thing worthwhile in the whole bill was giving the people more information to make informed election decisions and to bring shady, out-of-state donors out of the weeds.”

The bill has to go to the House floor, where it may be amended. It is also likely to go to a conference committee for more negotiations if it passes the House in its weakened form.

The good news is that some leaders from both parties agree that disclosure and transparency is critical for the future of democracy in West Virginia. If you care about that, this might be the time to say so.

What could go wrong? 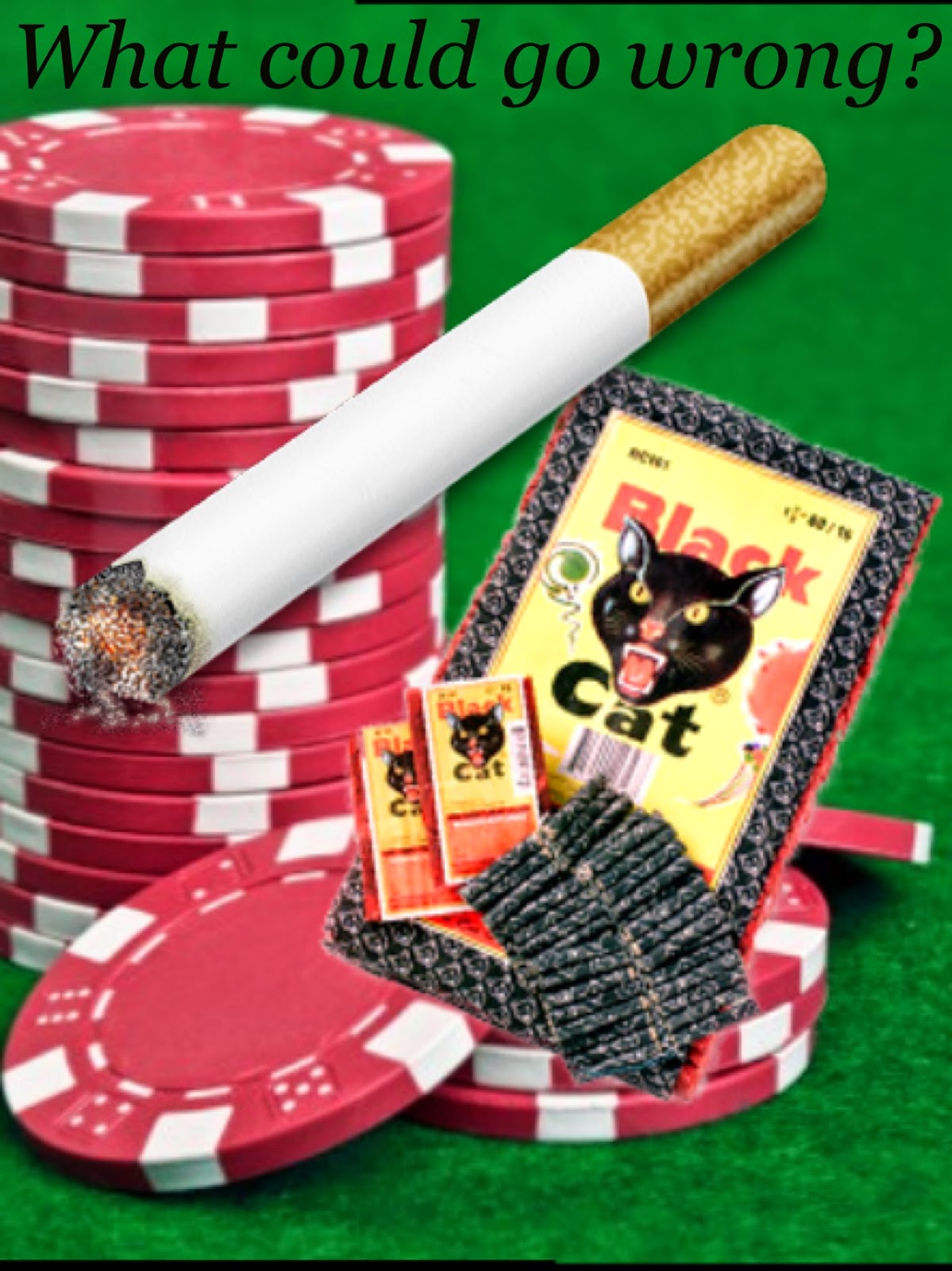 Things are crazy the last week of the WV legislature in a good year, which this isn't. That means things are even crazier. I don't know where things stand now, but earlier today there was discussion about a bill that would not only allow indoor smoking at state casinos but also allow fireworks sales at the same places. A friend of mine came up with the above meme, which asks a great question: what could possibly go wrong?
by El Cabrero 1 comment:

The winter of my discontent

OK, this winter has already been on my nerves for a good while, what with power outages, burst pipes and all that. But now it's personal. Thanks to a couple of winter storm systems, I missed the two biggest WV labor rallies in years, both targeting the rightward drift of the WV legislature. The first was last month. The latest was yesterday, when I was waiting out a power outage and plumbing woes. I guess I can take consolation in the fact that the fight isn't over yet.
by El Cabrero No comments: