It seems like a long time ago that WV Governor Tomblin made the decision to expand Medicaid under the Affordable Care Act. I was there in the crowd celebrating that victory when it went down, but none of us who worked for it dreamed WV would do such a great job of signing up folks. We're talking 150K in a year.

We know that this was good news to those who got covered. Now it looks like it's good news in the states that expand Medicaid for both taxpayers and other health care consumers. It turns out that it's also good news for people who get jobs in the health care and service sector. According to Fitch Ratings,


The states that expanded health insurance access under the Affordable Care Act (ACA) have seen substantially faster growth in healthcare jobs than those that did not since the first expansions began last January. If this trend continues, Fitch Ratings says it could support a broader economic and tax base for state budgets and improve nonprofit hospital finances in those states....

According to data from the Bureau of Labor Statistics, healthcare and social assistance jobs grew over 30% faster between December 2013 and December 2014 for 24 states that implemented ACA expansion on Jan. 1, 2014 than those that did not. On average, those states saw jobs in the healthcare and the social-assistance sectors grow by 2.4% YOY. Twenty-four states that didn't expand grew at 1.8%. Data for Alaska (a non-expansion state) and New Mexico (an expansion state) was not available.

(In case you were wondering what the YOY abbreviation meant, like I was, it's "year over year.")
by El Cabrero No comments:

At least one recent positive trend is the move, however tentative, away from mass incarceration and a rethinking of the whole "war on drugs," which worked about as well as Prohibition. The latest example is recent legislation from neighboring Kentucky in an effort to deal with its heroin problem.

In another surprise good move, the US House passed bipartisan legislation what will among other things preserve the Children s Health Insurance Program (CHIP). WV's own delegation, which ain't what it used to be, actually voted to preserve CHIP. It may need a nudge in the Senate.

Off topic, I sooo want to see this movie.
by El Cabrero No comments:

One more for the road

Yesterday's post highlighted one of philosopher Friedrich Nietzsche's great nuggets. A few people really enjoyed that. Fortunately, there are plenty more where that one came from. Here's one that is sadly all too true all too often:

"How good bad music and bad reasons sound when we are marching into battle against an enemy."

And speaking of bad reasons and bad things generally, here's a look at what House and Senate Republicans are proposing about the federal budget.
by El Cabrero No comments: 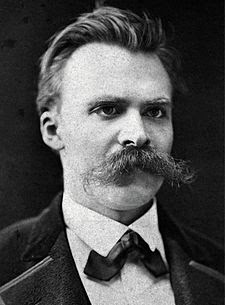 One of things I love about Nietzsche is his ability to pack a whole essay or maybe even a book into a single sentence. One of my favorites is about how our sincere attachment to bad or false ideas can do more damage than deliberate falsehoods. Think Bush building up to Iraq invasion, European war plans in 1914, tinkle down economics, utopias induced by violence, etc. etc. etc.

Convictions are more dangerous enemies of truth than lies.