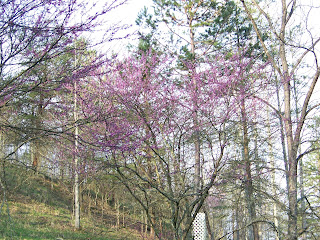 One nice thing about this time of year in El Cabrero's beloved state of West Virginia is the blooming of the redbuds, which come to think about it aren't exactly red. These little trees are pretty inconspicuous most of they year but in the spring (earlier these days due to weird weather), they burst into glory and can make even a human-trashed landscape look pretty. Or prettier anyway.

I DID NOT WRITE THIS scathing editorial about right wing Whackadoodles. But I kind of wish I did.

GETTING TAX BREAKS, BUYING POLITICIANS. Here's a look at some corporate tax dodgers and what they do with all that spare money.

Deja vu all over

It's time for federal budget kabuki theater again in the nation's capitol. House budget committee chair Paul Ryan just released his proposed budget, which is every bit as nasty and scary as it was last year. Bob Greenstein of the Center on Budget and Policy Priorities refers to it as "Robin Hood in reverse--on steroids." Read more about it here.

THE ROLE OF GOVERNMENT in growing the economy is discussed in this op-ed by a friend of mine. It's nice to see somebody else feeding the right wing trolls that lurk at online news sources.

AND JUST TO COVER ALL THE BASES, here's an item on a jellyfish inspired aquatic robot.

El Cabrero just finished reading Interesting Times, the autobiography of the British Marxist historian Eric Hobsbawm. In it, he quotes from a book titled Invisible Cities by Italo Calvino, which has an interesting suggestion about how to deal with the hells humans create for themselves on earth:

There are two ways of enduring it. The first is what many find easy: accept hell and become part of it, until you no longer see that it is there. The second is risky and needs constant attention and learning: in the midst of hell to look for, and to know how to recognize what is not hell, to make it last, to give it space.

The logic of climate change denial

Despite living in a weather-disaster-of-the-week world, major segments of the ruling class of El Cabrero's beloved state of West Virginia and the United States as a whole remain invested (pun intended) in denying climate change, or at least delaying action on it until it's too late and then saying that nothing can be done.

Truth or science has nothing to do with it; it's all about the money.

The sad thing is that there is a good chance they can get away with it, although that probably won't win them a lot of gratitude from future generations.

Recently, however, Senator James Inhofe, intentionally or not, opened a window on the real mindset of denial. While appearing on Rachel Maddow's show on MSNBC, Inhofe said of climate change

I was actually on your side of this issue when I was chairing that committee and I first heard about this. I thought it must be true until I found out what it cost.

WAR WITH IRAN would be a big drag, economically speaking. Probably in other ways as well.