My word-horde, to use the language of Beowulf, is running a little low at the moment. Fortunately, that is not the case with everyone.

THE ZIMMERMAN VERDICT. Here's a response from the New Yorker.

GROWING FROM THE MIDDLE. President Obama made the case this week for growing the middle class-and thereby growing the economy. Aristotle would probably agree. So would several economists discussed here.

MORE FUN AND GAMES WITH THE WV AG discussed here.

Good weekend wishes to one and all (mostly).

O what a falling off was there

Once upon a time, the office of West Virginia's Attorney General was one devoted to things like consumer protection. When, for example, my elderly mother was preyed upon by predatory marketers, they tended to crawl back under their rocks when I mentioned the name of Darrell McGraw.

Those days are gone since the current occupant of that office, Patrick Morrisey, was elected mostly due to money from West Virginia's colonial masters out of state. As the Charleston Gazette noted in a recent editorial, the consumer protection division of that office has pretty much been gutted.

Should anyone be surprised that Pactrick Morrisey is pursuing a right-wing agenda, including investigation abortion clinics, and dismantling his office's consumer protection division? Not if they were paying attention.

Many voters were so focused on retiring longtime Attorney General Darrell McGraw that they didn't think through the consequences of electing Morrissey.

A quick glance of campaign contributors makes clear those donors weren't banking on Morrisey to continue McGraw's legacy of strong consumer protection and willingness to take on big pharmaceutical companies for price-fixing.

Morrisey's wife, Denise Henry, is a lobbyist for Cardinal Health in Washington D.C.

I wouldn't hold out much hope on that lawsuit. Follow the money.

Or maybe it has nothing to do with money at all (he wrote with irony). Maybe there are more important things for Morrisey to do...Like holding abortion witch hunts. Or opposing Medicaid expansion for hard working West Virginians when around 4 state residents die prematurely every week because they lack health insurance (uhhh...what happened to the whole pro-life thing?) Or holding forums on how we could make the state more business friendly?

Recently, Delegate Don Perdue, chair of the House Health Committee suggested Morrisey actually do something useful, like investigating WV's meth problems. I'm not holding my breath on that one either.

Servicing the ruling class is a full time job.

With his hammer in his hand 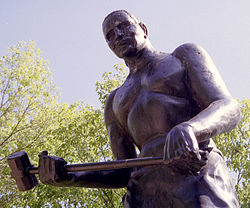 I'm a bit behind on newspapers, blogging, sleep, and such these days. However, an article in the Gazette caught my eye about West Virginia and folklore legend John Henry. Actually, the article was about visiting Boy Scouts fixing up the memorial park in Talcott WV, where the legendary showdown between the steel drivin' man and the machine drill was said to have taken place.

I have no idea exactly what went down, although I tend to believe there is some historical basis behind most legends. I do believe though that John Henry's story is a fitting metaphor for much of West Virginia's labor history. The dead labor power of machinery continues to compete with the living labor power of workers and the latter usually comes off worse.

John Henry is also an example of the role of African Americans in the state's economic history. After the Civil War, many came from the south to find work on the railroads or in the mines where they helped build the nation's industrial might and sometimes died in the process.

One more random but related thought: if you haven't read it, I highly recommend Colson Whitehead's quirky 2001 novel John Henry Days. Here's a review from when it first came out.
by El Cabrero 1 comment:

So far 21 states, fortunately NOT including West Virginia, have pledged not to expand Medicaid health coverage to low income working adults under the Affordable Care Act. I suppose all kinds of justifications can be given but I think it boils down to spite. And to contempt for poor people. And because some people can't stand the idea of a black man in the White House. Or some combination thereof.

Whatever may be the case, and, yes, I know I was being snarky, spite is expensive. According to a new Kaiser/Urban report, nearly two-thirds of those who would have benefited from the expansion live in state states that have either refused it or have not yet decided. This means 6.4 million Americans going without health care unnecessarily. Those states are also giving up over $50 billion federal dollars in 2016 alone. Go figure. 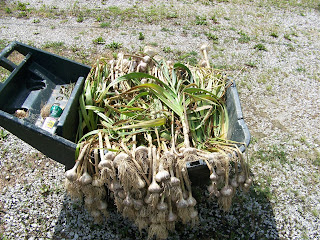 El Cabrero is far from being God's gift to gardening. For the most part, I'm terrible at it and weeding is one of my least favorite activities. However, for some reason I seem to have a karmic affinity to garlic, which is my specialty.

Usually we plant it sometime around Christmas, after the ground has frosted but before it gets too hard. When the scapes or bulbs come up in early to mid summer, we cut them off and sometimes eat them. Once they start to grow, we weed as needed. Harvest time is usually the second half of July, when the plants start to lose their green sheen.

This year we have a bumper crop, enough to last through the year and to plant next time around. Which is a good thing since we just garlic in just about everything we eat with the exception of ice cream (although that might be interesting just once).

JUST ONE LINK TODAY. Here's yet another news report on the growing interest among legislators in establishing a Future Fund or permanent trust fund from mineral severance taxes in West Virginia.