This is rich. Paul Ryan, an Ayn Rand Kool-Aid imbiber who claims to be a Catholic and pretends to care about the poor, decides to lecture Pope Francis about the folly of the pontiff's economic views. I guess maybe next he should also try to teach Jesus, the Hebrew prophets, and possibly God Almighty about the folly of their ways...
by El Cabrero No comments:

All that from a toe

You can always count on Goat Rope for the latest developments in Icelandic elves, zombies, dinosaurs, Neanderthals, and such. Oh yeah, and sometimes social justice stuff.

But let's get back to Neanderthals. Another story that broke over the holidays was one about sequencing the entire Neanderthal genome from a toe bone of a female that lived around 130,000 years ago.

This specimen revealed a lot of in-breeding but also a lot of interbreeding between Neanderthals and modern humans and another early group called Denisovans. It's not clear whether the inbreeding was common to all Neanderthals or just this batch from Siberia.

As for the inter-breeding....how can I say this? Let me just say that assuming I was younger and single, I think I'd have to be pretty anxious for a date to ask a Neanderthal out.

JUST ONE OTHER LINK and, this being Friday, it's Krugman on the economy of fear. 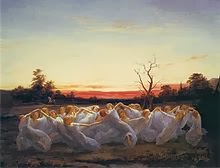 The Spousal Unit has been on this Iceland jag lately. Reading sagas, devouring Iceland books. She even has a new favorite Icelandic band, Arstidir, which wikipedia describes as an "indie-folk band with classical, progressive rock and minimalist elements."  I kind of like them too.

So anyhow, my interest perks when I run across news from Iceland. Like a story from NPR earlier this week about how people there are protesting a highway project which may harm "elf habitat" and possibly even damage an elf church.

I would like to attend an elf church of all things.

Elves are pretty big in Iceland apparently. The article cited a survey conducted a few years ago about Icelandic attitudes towards elves:

"Only 13 percent of participants in the study said it is impossible that elves exist, 19 percent found it unlikely, 37 percent said elves possible exist, 17 percent found their existence likely and eight percent definite. Five percent did not have an opinion on the existence of elves.

Apparently, some folks believe that there are 13 different types of elves. Some are only inches high while others are as big as humans.

HOW BOUT THAT POPE FRANCIS? Here's another reason to like him.

Christmas wishes, Dante trivia and a bit of Shakespeare 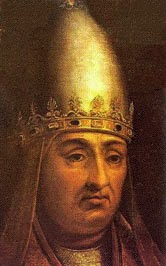 Best holiday wishes to all from the humanoid and other animal inhabitants of Goat Rope Farm. By chance, I discovered some trivia about a Christmas Eve anniversary I'd like to share. A co-worker of mine regularly sends out emails highlighting events in monetary history.

I must confess that I don't always read them but this time I did and found something interesting. On Dec. 24, 1294, Pope Boniface VIII was consecrated. He instituted the first Christian year of Jubilee, which promised forgiveness of sins for those who confessed and made pilgrimages (which by chance or not enriched church coffers).

Boniface is best known today, however, for being the person chiefly responsible for banishing the poet Dante Alighieri from Florence. Dante calls him out in Canto 19 of the Inferno.

In the spirit of Christmas charity, I will, however, put in a good word for Boniface: if he didn't exile Dante, we might not have the Divine Comedy. And if that were the case, what would be the point of living?

SPEAKING OF LITERARY IMMORTALS, I make it a practice every Christmas to include these lines from Hamlet:

"Some say that ever 'gainst that season comes
Wherein our Saviour's birth is celebrated,
This bird of dawning singeth all night long;
And then, they say, no spirit dare stir abroad,
The nights are wholesome, then no planets strike,
No fairy takes, nor witch hath power to charm,
So hallow'd and so gracious is the time."

So have I heard and do in part believe it. May it be so this year!
by El Cabrero 2 comments: 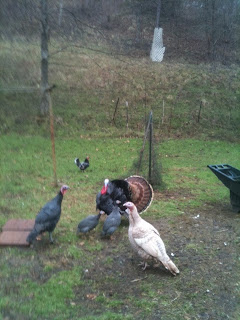 It has been documented many times that animals sometimes form friendships with others of different species. Some of that is happening this holiday season at Goat Rope Farm, where two young guineas (center) have been basically adopted by TurkLurk, an adult male turkey (the big guy in the middle doing the tail feather display). TurkLurk is acting downright maternal with these guys. During a rainstorm a few days ago, he could be seen sheltering both of them under his wings. It was downright sweet.

A HOLIDAY DOWNER. Here's a great op-ed by a friend of mine about how inequality is undermining good cheer for many people this year.

ARE THEY PAYING ATTENTION? Republicans in the US House don't want to extend unemployment insurance benefits, but a new poll shows overwhelming support for the measure. Unless something happens, around 7,000 West Virginians will lose benefits.

SPEAKING OF WEST VIRGINIA, here's another report from WV Public Broadcasting about a recent study of land ownership here.