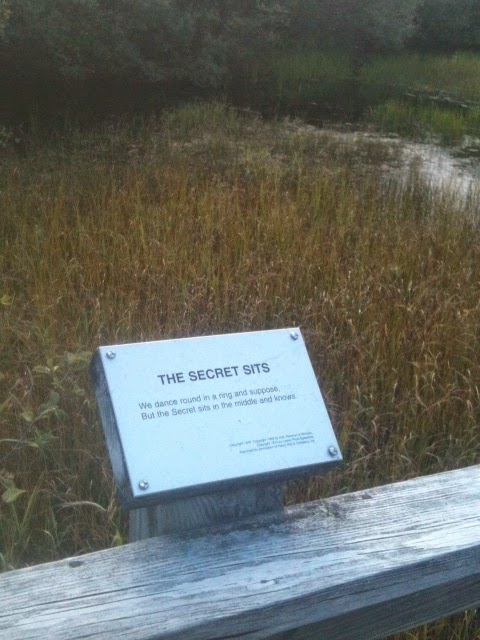 Yesterday, the Spousal Unit and I hiked a bit around the Robert Frost Interpretive Trail in Vermont. Along the way, I found a two line poem I had previously missed called "The Secret Sits." Here goes:


We dance round in a ring and suppose,
But the Secret sits in the middle and knows

I think he might have been right about that one.

ONE LINK FOR THE ROAD: It looks like the Affordable Care Act is reducing the deficit.
by El Cabrero No comments:

Trouble in the heartland

One of my favorite Bruce Springsteen songs, which I nominated here as an alternative state song for West Virginia, opens with the lines "Lights out tonight/trouble in the heartland." Here's another look at the trouble in the coalfield part of the heartland by way of WV Public Broadcasting and the Washington Post. Sad to say, I think they got it right.

RANDOM LINK OF THE DAY. Here's a look at Freemasonry today by way of NPR.

Over 30 years ago, the sociologist Herbert Gans cataloged the various ways predatory capitalism feeds on the poor. You can find his influential essay "The Uses of Poverty: The Poor Pay All" here. The latest twist on this kind of parasitism can be found in privatized programs that pretend to be community-based corrections systems and alternatives to incarceration but in fact might as well just attach suction pumps to suck the life out of those who fall into their clutches. Here's a good take on the subject from the NY Times.

MORE ON COAL'S DECLINE--and West Virginia's resource curse here, by way of the Washington Post..
by El Cabrero No comments:

In keeping with the occasional theme of positive things about West Virginia, today's Charleston Gazette included an article about a report on prisons given by Corrections Commissioner Jim Rubenstein to an interim legislative committee. According to Rubenstein, the results of prison overcrowding legislation passed in 2013 are already promising, with a drop from 1,700 to 900 inmates who should be in state correctional institutions backlogged in regional jails.

The overall population has dropped by 3.5 percent between July 1 2013 and June 30 2014, even though the effects of the reforms would take a few years to start working. The Division of Corrections is also implementing other policies aimed at reducing recidivism.

Next stop: the juvenile justice system.

NOW, go take a walk.
by El Cabrero No comments:

I've been blogging lately about positive things going on in West Virginia. The latest example is close to home: Cabell County Schools, a true innovator in all things food-related, is not only feeding kids more local food, but some of its own kids are getting paid for growing it.

If you watched Jamie Oliver's Food Revolution show a few years back about his time in the Huntington area, Cabell's county seat, you probably will remember a lot of manufactured drama. In fact, the county has been way out front for years in this field, no pun intended.

It's been estimated that West Virginians spend over $7 billion on food per year annually, yet produce less than $1 billion of that. No wonder the head of the state Department of Agriculture likes to talk about a $6 billion opportunity.
by El Cabrero No comments: