A surround of force 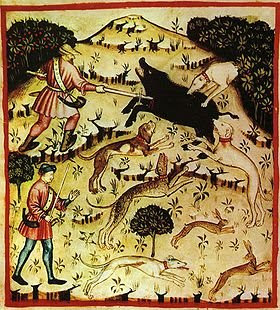 Being poor is sometimes like being hunted. Image courtesy of wikipedia.

There is a wealth of writings about poverty. I've scanned a good bit of them, but the one analysis that spoke most clearly to me was that of Earl Shorris in his 1997 book, New American Blues: A Journey Through Poverty to Democracy.

In preparing to write the book, Shorris traveled around the country and spoke with many people dealing with poverty. His description of the reality of poverty as people live it rang true to my own experience of it and seemed to fit the experiences of people I knew who had endured it.

Shorris called it "a surround of force." As he put it,

The poor, those who lose in the game of modern society, are thrust into a surround of force. Inside the surround, they experience anomie: panic is limitless action within a surround, but the surround ruthlessly limits the freedom of its objects by enclosing them.

Think of an animal being hunted. Another way of putting it might be to say that when you're poor, you're always on the defensive. It's one damn thing after another, generally not good. It keeps you always reacting and often deprives you of the opportunity to step back and reflect.

A line of Bruce Springsteen's comes to mind from "Born in the USA:"

You end up like a dog that's been beat too much 'Til you spend half your life just covering up.

When you feel like that dog, it's hard to be a citizen taking an active part in the life of the polis.

Shorris also came up with a novel approach to breaking that pattern through education which also rang true to my experience.

More on that tomorrow...

SPEAKING OF HARD TIMES, some states are running out of funds to pay unemployment benefits.

MISTAKES WERE MADE, according to an unpublished federal history of reconstruction efforts in Iraq.

BEYOND A CERTAIN POINT, more might not be better.

COMMON GROUND. Here's a suggested policy agenda many Americans agree upon, by way of Yes! Magazine.