Two for the weekend

In case you missed it, and are really bored, here's the latest of our weekly Wonk's World Facebook Live episodes on what's going on at the WV legislature, complete with props. Topics include teacher pay vs. tax cuts for business and the "noodling" of catfish. Really.

Then there's the latest Front Porch podcast about the bankruptcy of the Gazette...and, yes, noodling catfish.
by El Cabrero No comments:

What a difference a watchdog makes 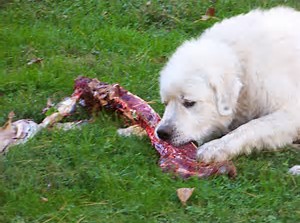 I'm still thinking about the impending bankruptcy of the Charleston Gazette-Mail, often referred to as West Virginia's watchdog newspaper.

That expression hit home to me. For several good years, Goat Rope Farm was watched over by Arpad the Magnificent (above, with deer carcass), our Great Pyrenees. The bad guys stayed away while the big dog was on watch.

After he died, the predators moved in. Some chicks here, some grown chickens there, a turkey or two. It was on.

Like a lot of other people I know, I was hit pretty hard by the news of the Charleston Gazette-Mail's bankruptcy and its possible buyout by Wheeling Newspapers. In the past, when I was trying to explain the impact of the Gazette's reporting in WV, I sometimes joked that without it, we'd be living in detention camps.

That doesn't strike me as so funny now.

It remains to be seen how much the new owner will retain of the old Gazette, including staff. But there's no way around the fact that this is a huge loss for West Virginia.

At a personal level, I'm grateful to the Gazette first for letting me know what was really going on in WV for over 30 years. I'm also grateful that when I was just a low wage worker in a public library, editor Jim Haught gave me the chance to be a contributing columnist. And my current editor Dawn Miller still puts up with me.

When I first started doing that in 1988, it paid $20 a week, which, believe it or not, was a lot of money to me then, buying a good sized bag of groceries at a time when my family lived in poverty.  My pay was eventually reduced to zero, but the chance to rant about the issues I cared about was invaluable to me. I probably wouldn't be doing the work I'm doing today if not for it.

We often really don't realize how lucky we were until things change.