This week saw a series of taxpayer funded pep rallies for coal in El Cabrero's beloved state of West Virginia. I'm not sure whether the festivities included torchlight parades, but there were plenty of ritualistic denunciations of the EPA and President Obama, both of which are regarded by the great god coal as the source and font of all evil in the world.

Newspaper coverage of such events is always good for lively comments from the trolls that lurk about the web the way giant carp lurk around the bait shop at Beech Fork State Park. A friend of mine highlighted one such comment, which I'm pretty sure is satire and good satire at that. But it's not that far removed from what lots of folks say with utter sincerity:

What is good for coal is good for WV. Coal is WV. Either you are a friend of coal or an enemy of coal. The enemies need to move out of this state. People don't mind the pollution because they know pollution doesn't hurt anyone. Global warming is as lie. Using tax dollars to support coal companies is the best investment we could make. Think of how much better WV will be 20 years from now when when get rid of the stupid mountains and forests. Public enemy number one of coal and WV is the Kenyan born socialist Obama. Obama's eco-thugs are shutting down the mines and laying off miners. Without coal our state will become a waste land and there won't be any jobs. We won't even be able to watch the Mountaineers play ball because the tree huggers will take away our TV's. From the 1800's on, the coal industry brought prosperity to WV. We need to stop the regulation. If a miner gets hurt its his fault. Don't like the smoke from the power plants? Then don't breath. Do us all a favor"

El Cabrero has been an irregular blogger this week due to running around a lot. Here are a few items that have caught my eye lately.

THOU SHALT HAVE NO OTHER GODS BEFORE IT. This Gazette story from a couple of days ago provides great insight into the politics of coal in WV. This week the industry is having a series of taxpayer funded pep rallies in which the Obama administration and the EPA will be ritually denounced. Coal is a jealous god and everybody who is anybody has to show up and burn some incense and join in the maledictions.

MORALITY AND TAXES. Here's a look at the moral sentiments that often lie behind opposition to taxes.


WHO'D A THUNK IT? Birds and turtles are cousins.

Quote of the week (or century)

Here's one of the best quotes about literature I've ever found. It is attributed to Southern author Pat Conroy's mother:

“All Southern literature can be summed up in these words: ‘On the night the hogs ate Willie, Mama died when she heard what Daddy did to Sister.’”

I tend to distinguish between Appalachian and Southern culture and literature, but I do recall a short story by my favorite WV author Breece Pancake which involved a bit of hoggish anthropophagy.

(And, by the way, how is anthropophagy for a cool word? It sounds way classier than man-eating.)

MUST READING. Here is yet more rationality from Coal Tattoo. Some of the links are really worth checking out.

WORK SHARING. Here's an op-ed by yours truly on a new way to deal with cyclical unemployment.

BABOONS AND PEOPLE. For both animals, those with higher social status are healthier. 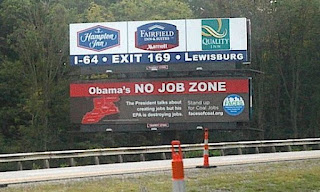 One of my favorite West Virginia spectator sports is watching our ruling class throw hissy fits. They're really good at it. In fact, they are now starting year four of a protracted hissy fit aimed at the Obama administration's "war on coal."

Short summary: the Bush administration let the industry do pretty much anything it wanted to all the time. The Obama administration has sought to mitigate some of the negative impacts of mountaintop removal mining and to take steps to deal with carbon emissions and climate change.

No self-respecting WV politician would admit willingly to either the possibility that mountaintop removal isn't the best thing since sliced bread or that climate change is real and caused by human activity. That's just not where the money is.

So, anytime a mountaintop removal permit is challenged or denied or the EPA takes steps to cut down on carbon, it's on.

One favorite tactic of the hissy fit is to accuse the administration of killing coal jobs, as the above billboard on I-64 illustrates.

Now, I wouldn't expect these facts to get in the way of a good hissy fit. In fact, the rhetoric is only likely to be amped up at a series of taxpayer funded coal pep rallies that will take place this week. Everybody who is anybody, politically speaking, is sure to be there.

My favorite part of the whole thing is a comment by a coal association official about the job numbers: "We're glad to provide gainful employment."

Just in case anybody missed it, let me unpack that a bit: if coal jobs numbers are up, it's because of the benevolence of the industry. BUT if they go down (even when they don't--in fact, even when we pretend they go down when in fact they really go up) it has nothing to do with automation, competition from other areas, with plentiful and cheap natural gas or with market conditions. Rather, it's the black guy's fault.

The sad part is that it seems to be working.