Condemned to be free 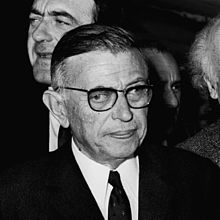 When I was quite a bit younger, I went through an existentialist phase. It wasn't all that uncommon at the time. I'm not sure I ever entirely emerged from it.

Despite all the weight of apparent evidence for scientific determinism, I still have a core belief that however much our lives are conditioned by external and internal forces there is some small residue of choice if not in outcomes then at least in our reaction to them. And whatever decision I make or allow to be made, I can't help but feel it could have been done just a little bit differently. Or maybe a lot. And that the future is at least in part unwritten. Or maybe a lot.

The French philosopher Jean-Paul Sartre, who to be fair was not all that admirable a guy, famously stated that we are condemned to be free.

Apropos of nothing, some words of Sartre's have been on my mind lately. In essay he wrote for The Atlantic in 1944, shortly after the liberation of Paris by the allies, he wrote that:


"Never were we freer than under the German occupation. We had lost all our rights, and first of all our right to speak. They insulted us to our faces. ... They deported us en masse. ... And because of all this we were free."

Obviously, he didn't mean the good guys then could do or get whatever they wanted. But extreme times made the weight of free decisions--to resist or to collaborate, to hold out a little longer under despair or interrogation or torture-- a little more stark.

That kind of freedom can be terrible and terrifying.

These are pretty dark times. While a lot is beyond our immediate control, the weight of our decisions is getting heavier.

In that sense, we're pretty free right now too.
by El Cabrero No comments: