Regular readers of Goat Rope know that I'm more of a class warrior than culture warrior, metaphorically speaking. The class one isn't going so well these days as far as my guys are concerned. It's more a one-sided class beatdown. Cultural conflicts, which aren't my main gig keep popping up. One such is the subject of transgender rights or the lack thereof. That's on the menu in this week's Front Porch. I think it's one of the better ones.
by El Cabrero No comments:

It's no secret that WV's budget is a hot mess. The majority-Republican legislature didn't pass one at the end of the session and there's still no deal.

Hardliners oppose any new taxes, even extremely reasonable ones like a $1.00 increase in the cigarette tax, which would both raise needed revenue and have a positive public health impact. Instead, they are talking about slashing budgets, laying off public employees, and even privatizing public colleges and universities and the Public Employees Insurance Agency.

There are some voices of reason, including this Gazette editorial, this op-ed, and  this bit of myth busting about the budget. A number of groups came together Thursday at a press conference calling for higher tobacco taxes.

It's not clear if the ideologues in the legislative majority are listening. One of the speakers at the press conference said that raising this kind of revenue was a "no-brainer." I'm not sure what this says about WV, but in my experience the no-brainers are the toughest fights of all.
by El Cabrero No comments:

The young and the (really) restless 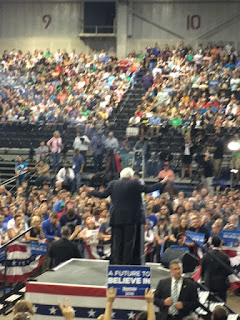 Lots of young people have Bernie Sander's back. Photo taken at his Huntington WV visit.

Vermont senator and US presidential candidate Bernie Sanders visited Huntington WV yesterday. The Spousal Unit and I went to check out the scene (at which a certain unnamed person repeatedly boasted of her Vermont origins). The thing that struck me was what I've heard about all over the country: his appeal to young people.

The line to get into the Huntington civic center went on and on--some might even say it was YUGE-- and it was full of young people in one of the oldest states. I was amazed that I recognized so few people, although I guess you'll have that when 6,400 or so show up. We talked to some of them and were amazed by their enthusiasm and awareness.

On reflection, it's probably no wonder. This demographic group has been treated as a throwaway generation with throwaway jobs and many of those lucky enough to get a higher education are saddled with debt which they won't be able to throw away. Still, it was a surprise to see this article, which says that a majority of Americans between 18 and 29 are not fans of capitalism.

Of course, capitalism, which has been around for a few hundred years, has taken many forms in different times and places and still does today. But it probably is safe to say the the latest version of it around here hasn't done them a lot of favors.

They definitely have a dream. I wonder whether and to what extent it will be deferred. In any case, there is a YUGE amount of energy for change out there if a way can be figured out how to channel it.
by El Cabrero No comments:

This is our concern, Dude

Over 1000 very poor West Virginians are about to lose SNAP food assistance. Many of these may be homeless or living in isolated rural areas or may be dealing with diagnosed mental and physical health issues. I guess the good news is that the number of such people is probably much smaller than it would have been without public pressure and media scrutiny.

SO THIS MUST BE MY WEEK FOR RADIO. The latest Front Porch podcast from WV Public Broadcasting features my friend Pastor Matthew Watts talking about racial disparities in WV's prison system.

The Front Porch podcast/program, by the way, won 2nd place in the Associated Press broadcasting awards for Virginia and West Virginia. The category was editorial or editorial series.

And while we're at it, the multi-state public broadcasting program Inside Appalachia recycled a Front Porch segment in a program on "Appalachianism," Appalachian dialects, prejudices against hillbillies, and the politics of language. I  never said I was not a potty mouth in case you listen.

OFF TOPIC. Some big political news in WV is a planned visit by democratic socialist presidential candidate Bernie Sanders to my home county. You won't find any endorsements here, but a friend sent me this article by writer and WV native Jedidiah Purdy. To be exact, he proposes 11 theses on Sanders.

I have no knowledge of this topic whatsoever, nor would I be disposed to discuss it if in fact I did, but I'm pretty sure the 11 theses is a riff on the same number of theses written about philosopher Ludwig Feuerback by the young Marx.  That's what I heard anyway.