How not to kill yourself

Every so often I teach a college class in sociology, often on the topic of "Deviance and Social Control." One of the topics usually covered is suicide. Sometimes I bring in literary readings, including Hamlet's "To be or not to be" speech (soliloquy being too difficult a word to spell); a section of Herman Hesse's Steppenwolf (not to be confused with the 70s rock group); and good old Moby-Dick.

Of the three, Moby has the best practical advice for people who may have self destructive thoughts but want to avoid acting them out. He has a safety plan. Safety plans are familiar to people working in the field of domestic violence. Potential victims are encouraged to devise a plan for escape if things ever get bad enough. As I understand it, even batterers undergoing treatment in intervention and prevention programs are encouraged to use safety plans when they feel the tension level rising. It's a way of getting the hell out of a situation when before the situation gets to you.

Ishmael, the windy narrator of Melville's classic, has his own safety plan when he gets a bit too morbid:

Whenever I find myself growing grim about the mouth; whenever it is a damp, drizzly November in my soul; whenever I find myself involuntarily pausing before coffin warehouses, and bringing up the rear of every funeral I meet; and especially whenever my hypos get such an upper hand of me, that it requires a strong moral principle to prevent me from deliberately stepping into the street, and methodically knocking people's hats off- then, I account it high time to get to sea as soon as I can. This is my substitute for pistol and ball. With a philosophical flourish Cato throws himself upon his sword; I quietly take to the ship.

Maybe going off to sea on a whaling ship isn't the best option for people today when the hypos get the upper hand, but the basic idea is a good one. When things go bad, break the pattern.

We're just on the first paragraph of this greatest American novel and there's already been a potentially life saving tip. Who knows what else we'll find.

HERE'S ANOTHER GOOD IDEA: to wit, how not to give away the store and wind up with nothing when it comes to economic development incentives.

GOVERNMENT: WHAT IS IT GOOD FOR? Here are some ideas

SPEAKING OF READING, here's a look at how important it can be for the brain development of children. I say, make the little ones read Moby-Dick! (Actually, I think I did read a kid's version when I was young, which might explain a lot.) 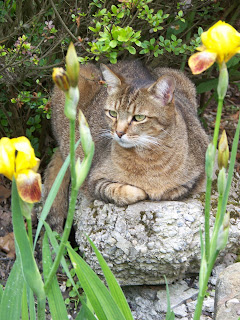 We interrupt Goat Rope's regularly scheduled programming to announce with sadness the passing of Seamus McGoogle (2001-2012), whose image has oft adorned this blog. Seamus died after a long illness. Always a dour kitty, his discomforts towards the end did little to lighten his mood. He was loved nonetheless. We wish him a fortunate rebirth in the Pure Land of Amida Buddha, where he could dourly work toward ultimate Enlightenment under the best of conditions.

JUST ONE LINK TODAY. It looks like some candidates for the WV House from both parties are interested in the idea of a Future Fund or mineral severance tax trust fund. 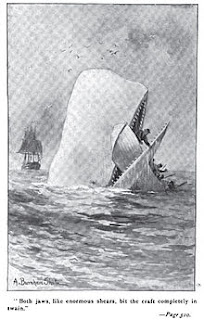 It's been a long time since I've gone off on a long literary jag, but I feel one coming on now. And the topic is...you guessed it...Moby-Dick. I have hit on that book now and then but am finally up to the challenge of really rolling in it. I was prompted by two events.

First, I found my old, beat up and highlighted copy of the book where it had been lingering in my daughter's house. Second, I listened to Nathaniel Philbrick's Why Read Moby-Dick?, which reminded me how much I love it. I think I can come up with more reasons than he did as to why the book is worth many a read.

As Melville said, "To produce a mighty book, you must choose a mighty theme. No great and enduring volume can ever be written on the flea, though many there be that have tried it." Perhaps the same can be said of blog posts. While I'm not sure that my series on Moby will be mighty, I can think of no mightier book to base one on.

INCOME INEQUALITY may be a bar to economic growth.

THE TRAVAILS OF TRUE LOVE are especially hard for this ancient lizard. 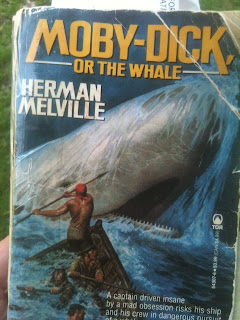 I know that there are some people out there who are outraged when someone writes in a book or underlines passages. I do not subscribe to this viewpoint, which is just as well since I am one of those people who does that kind of thing. To me it's more like adding value. When I read library or otherwise used books, I'm always interested in what others have written in the margins and give underlined or highlighted passages a closer look.

Those markings can come in really handy in books you read more than once. I was delighted a few days ago to find my old beat up and marked up copy of Moby-Dick in my daughter's house. I'd been making do with another one, but this one had most the coolest passages underlined and bookmarked. Sure, it's in pretty bad shape and the binding has started to come apart, but I'd prefer it to a new one any day.

For that matter, aside from rare editions and precious manuscripts, I think books are meant to be consumed and used. If I was a real writer, I'd be more honored if my books were read, re-read, marked on, underlined, lived with and used up than if they sat in pristine condition unused on a shelf.

Speaking of Moby-Dick, I feel a long literary jag coming on.