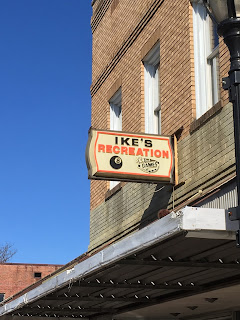 Want to do something?

So if you are one of the millions of people out there who are wanting to do SOMETHING now, here's a simple step for those who live in West Virginia: sign this petition asking the president elect not to turn his back on nearly 180,000 West Virginians from working families who benefit from Medicaid expansion. When you've done that, share the link with others on all your social media.

Once you've done your good deed for the day, you can jog a victory lap and reward yourself by listening to the latest Front Porch podcast.

Is this a full service blog or what?
by El Cabrero No comments:

This op-ed of mine on recent positive news about police/community relations in Charleston came out in yesterday's Gazette Mail.

The ancient Chinese sage Confucius (aka Kong Fuzi) was once asked what a kingdom needed to survive. He answered adequate food, armaments and the trust of the people. When pressed about which he would give up if necessary, he said he’d first part with armaments and then food.

His reasons still make sense: “Death has always been the lot of humanity; but if the people have no faith in their rulers, then the state cannot exist.”

It’s as true today as 2500 years ago that the greatest protection for people in positions of authority is to be seen by citizens as legitimate and worthy of trust.

That’s especially true for those charged with maintaining public safety, especially police officers who put their bodies on the line every day.


Unfortunately, that trust has been damaged in many parts of the country by the tragic killings of African Americans, particularly young men, by police officers. These have eroded public trust, outraged many people, created civic unrest and even contributed to the killings of police officers.

This is sad in so many ways. Ironically, many of the communities most in need of legitimate law enforcement are those in which trust has been damaged.

Incidents like this can happen anywhere and quickly spin out of control, leading to situations where no one wins in the end.

That’s why I think it’s great that the Charleston Police Department, in partnership with many community organizations, has taken major steps to get out in front of this issue.

For more than a year, police officials under the leadership of Chief Brent Webster, met and partnered with groups such as NAACP-Charleston, Black Ministerial Alliance, Our Children Our Future, American Friends Service Committee, American Civil Liberties Union-WV, Kanawha County Public Defender’s Office, East End Family Resource Network, RESET, the Tuesday Morning Group and the WV Coalition Against Domestic Violence to hammer out some real solutions to these problems.

What they came up with could well be a model for the nation, but getting there wasn’t always easy or pretty. The complex bundle of issues involved weren’t unique to Charleston and certainly didn’t begin here. Over time it became clear that both community members and the police were caught up in much larger systems and a long and often ugly historical process.

“The first meeting with Chief Webster with the Charleston Police Department was slightly tense. We were sitting around the table to discuss the fact that the arrest rate of blacks in our small city of just over 50,000 people was more than double that of whites. Before getting into the problem at hand, we all shared why each of us personally thought it was important to address racism, a dialogue that highlighted how the problem we were meeting about was not about singling out the Charleston Police Department as an offending racist institution, but like all the institutions with which we affiliate, are all part of a broader problem of systemic racism.”

After a lot of give and take, the group came up with a comprehensive program. To promote transparency, the department will begin publishing monthly arrest statistics broken down by age, race, gender and reason for arrest and will implement state of the art body camera technology and best practices.

To reduce the likelihood of unfortunate incidents that could endanger civilians or police, promote better understanding of larger issues, and improve community relations, the department will implement de-escalation training, require training on the dynamics of race and racism, and hold roll call presentations so that officers and community members can hear from each other.

In addition, the department will offer annual community service awards which to recognize officers who demonstrate their commitment to community policing and have engaged in acts of compassion and caring.


Finally, the Charleston Police Department has pledged to cooperate with other community leaders to advocate for policy changes that reduce recidivism and improve the chances for ex-offenders to successfully re-enter the larger society.

If steps like this had been implemented around the country a few years back, black and blue lives would have been saved and all kinds of trouble would have been avoided.

After this was announced at a recent press conference, there was some inevitable trolling on the internet (I’ve come to regard feeding internet trolls as a form of Christian charity). But there was quite a bit of positive support across the political spectrum.

A Daily Mail editorial said “By building mutual respect and cooperation, police officers and the community can successfully maintain order in Charleston and become a model for the rest of the nation.”

Conservative broadcaster Hoppy Kercheval wrote “The Charleston Police Department and community leaders deserve credit for being foresighted. Their efforts do not guarantee the state’s Capital City won’t have its version of a Charlotte, Baton Rouge or Baltimore, but they do reduce the possibility, while simultaneously strengthening relations between the police and citizens.”

I agree. And I love it when West Virginians lead the nation in something positive. It doesn’t happen every day. But it happens.

Want to do something?

If you live near the Charleston WV area and want to do something, please consider coming to the West Virginia Welcomes Refugees rally tomorrow Nov. 15 at 5:00 pm at the corner of Court Street and Kanawha Boulevard.

You can find news about the event here. There's also this op-ed by Rabbi Victor Urecki and this Gazette editorial.

This won't take care of everything, but it might help "break the freeze" some of us have been feeling.
by El Cabrero 1 comment:

The latest Front Porch discusses the recent election and whether the president elect, whose name escapes me at the moment, and the governor elect Jim Justice will be able to keep their promises. Or should.
by El Cabrero No comments: