El Cabrero is about to hit the bird's road, to borrow a metaphor from Beowulf. I'm flying today to Italy for a week or so where the Spousal Unit has been studying Dante these days. I plan on doing some posting from abroad, but probably on an irregular schedule.

My travel plans were interrupted Wednesday evening, however. As I was exercising on a stationary bicycle, I started feeling woozy. Then I was shocked in the chest, which felt about like being kicked there.

As a martial artist, I am used to being kicked in the chest, but still it was disconcerting to experience this in the absence of a tangible human foot. I wondered what was up until I remembered the internal defibrillator that was installed there a few years ago and which hadn't done anything up till now. Over the next few minutes, it shocked me two more times.

I wasn't sure how serious it was, so I took a moment to compose myself in case it was The Big One and then set about practical things like calling 911, changing clothes, etc. During all this time, for some reason I took bizarre comfort in remembered lines of the divine Miss Emily Dickinson's death poems.
After a plethora of tests and a miserable 24+ hours, it looks like the machine mistook a fairly minor cardiac incident for a major one.

Game on!
by El Cabrero 2 comments: 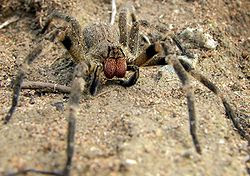 The staff of this blog never rests in its quest for the most interesting and relevant news stories around the world. Today's post is only the latest example.

It is a nightmare scenario for any supermarket. Last Friday morning, as an employee was unloading bananas from a crate in a large grocery store in south-western Germany, a large, greyish, hairy spider about 13 centimeters long jumped out and scuttled under a shelf.

The member of staff checked the Internet for images of spiders resembling the one he had just seen, and was shocked when he found a match: a Brazilian Wandering Spider (Phoneutria nigriventer), billed as one of the world's most venomous and aggressive spiders.

(For freedom lovers, 13 centimeters is over 5 inches.)

Despite a major spider-hunt, the critter in question has not been found. Spiegel continues:

Anyone encountering it should be very careful. Amy Stewart, the author of "Wicked Bugs: The Louse That Conquered Napoleon's Army & Other Diabolical Insects," cites the Brazilian Wandering Spider as one of her top five worst bugs. A bite doesn't just cause severe pain, but also leads to breathing problems, paralysis and even death.

That isn't all. Stewart writes that the creature is fearless and so aggressive that it will stand on its hind legs, prepared to take on any challenger, however big.

(Spiegel is too delicate to add that the spider's bite has bizarre, unpleasant and seemingly opposite effects on the unmentionable parts of human males.)

All of this is to say, be cautious around bananas.

I ask again, is this a full service blog or what?

The thing that never changes

In a world of radical impermanence, one might be grateful for things that don't change. Or maybe not.

The WV legislature is having an interim session this week. I went yesterday to check some things out and ran into a good friend and sometime Goat Rope reader. For two years, he and I were part of a group that fought hard to get the legislature to pass a law that would let WV draw down $22 million in stimulus funds to expand unemployment benefits to people who need them but can't get them under current rules.

The window to do this closes in the first half of next month. During the last regular session, we gained a few yards but lost for no good reason other than the ideological opposition of business groups and the politicians who do their bidding.

He was there to try for one "Hail, Mary" pass that would be only slightly less miraculous than the bodily Assumption of the Virgin into Paradise, i.e. persuade a legislative leader to put in on the agenda for a just in time special session.

Ever the optimist, he pointed to several things that had changed since this winter. First, the state's unemployment insurance fund was solvent; second, the state has a major budget surplus; third, WV's unemployment rate has stabilized.

MARCELLUS. About 100 people attended a protest yesterday at the state capitol calling for regulation of Marcellus Shale natural gas drilling.

YOU KNOW THAT LIST OF TOOL USING ANIMALS? We need to add blackspot tuskfish to the list. 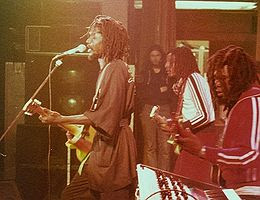 In between discs of an unabridged recording of Shelby Foote's Civil War trilogy, this weekend I caught this NPR story on an old musical favorite, Peter Tosh, once a member of Bob Marley's Wailers. It's worth a listen.

As an economic justice person working for an organization that is best known for advocating peace, I have to admit that I have a particular fondness for the chorus of his song "Equal Rights"

I must admit to have mellowed a bit with age; I still want justice, but I'll take peace too if it's on the table.

CAN'T OR WON'T act to fix the economy? Mostly won't.

RETHINKING THE DRUG WAR. It hasn't worked too well.

PROTECTING THE POOR. A wide variety of WV groups have called on their congressional delegation to spare programs that are lifelines to low income people in budget deliberations.