Too pretty to kick 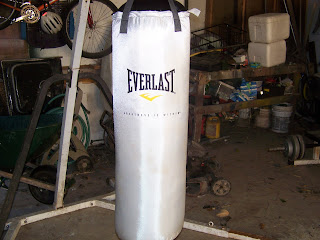 I always used to laugh at people who bought furniture for their homes but didn't use it because it was too nice. Ironically, I have found myself in a similar predicament with a heavy punching bag.

My old one died after absorbing millions of foot pounds of punches and kicks (and saving me from innumerable prison sentences). So I bought a new one. The problem is that the concrete floor of the garage is pretty cold this time of year and besides is strewn with all kinds of things that are unfriendly to feet. And while barefoot isn't an option, the bag is too nice to tear up with my trail running shoes. I supposed I could just punch it, but for a karate guy that is a bit like playing guitar with three strings.

Maybe I should just look at it a while longer.
by El Cabrero 1 comment:

A day of surprises

I have been a terribly inconsistent blogger this week mostly due to the fact that A. I forgot to take my computer on an extended road trip; and B. while I brought the Precious (aka the iPhone), I have not mastered the art of composing on thumbs.

I had all kinds of things to write about but instead was as shocked as many people in WV were to find that the state board of education voted 5-2 to fire state school superintendent Jorea Marple, who is is widely respected as an extremely dedicated and competent educator. Most people see this as a power grab by the Manchin faction (as if it needed more). All of those who voted to fire Dr. Marple were appointed by former governor and now senator Joe Manchin and one of the five is his wife. It looks like this may be the opening shot in a brewing battle over the future of education in West Virginia. Marple's husband Darrell McGraw, longtime progressive state attorney general, was defeated in the recent election by an outsider who rode to office on a tidal wave out outsider money.

Far be it from El Cabrero to wish any ill on anybody, but this was vile and I hope that those who did this gain absolutely nothing from it. For what it's worth, I'd also like to express my support for Dr. Marple and best wishes for her future. I know that many, many people here feel the same way.

ANOTHER WV BOMBSHELL went off today as well in the announcement that Patriot Coal intends to phase out mountaintop removal operations. Here are some of the reactions by way of Coal Tattoo. I'd say keep checking that blog for ongoing developments. It's not clear what this means for the future of that kind of mining. Patriot, while a major actor in this area, has been more in the news lately for its bankruptcy and this agreement isn't binding on other companies.

If the throwing of ruling class hissy fits was an Olympic event, the competition would be pretty steep, especially when it comes to political posturing regarding the Obama administration's alleged war on coal. In all fairness, I'd have to say that the gold medal winner in this event would have to be Robert Murray of Murray Energy.

Murray made headlines before the election by hosting a 'pro coal' Romey rally in Ohio which miners were...shall we say...strongly encouraged to attend (to the extent of closing the mine that day). The latest stunt involved laying off miners because he was displeased by the election outcomes. The layoffs were accompanied by a prayer in which Murray lamented the American people's drift away from freedom to the Almighty.

It's too bad that miners and their families have to be pawns in his game.

(Note: El Cabrero is on the road using an expensive hotel computer which won't even let me post links. It's not too hard to find this story online however.)
by El Cabrero No comments:

On not drinking one's own poison

There has been quite a bit of commentary lately about the failures of right wing polling and intelligence in the 2012 elections. All this has reminded me of something I read years ago in Peter Berger's 1963 classic An Invitation to Sociology.

Early on in the book, he talked about how good intelligence means getting accurate information, whether you like it or not, rather than simply reinforcing the propaganda of the side one happens to be on. Holy Fox News, Batman!  In Berger's words,

“…good intelligence consists of information free of bias. If a spy does his reporting in terms of the ideology and ambitions of his superiors, his reports are useless not only to the enemy, if the latter should capture them, but also to the spy’s own side.”


Again, one should never take one's own propaganda too seriously.

MORE ON THE RAPE BOYS. In yesterday's post, I briefly discussed the political failures of right wing gynecology in the recent election. Here's Mother Jones for a more complete look at the political scoreboard.

NOTE: El Cabrero is on the road a good part of the week. Posts may be irregular. Stay tuned...