More on the southern coalfields

Lots of people even beyond WV are starting to track the situation in the southern coalfields, where mining jobs have been dramatically declining. Something about this piece by environmental writer David Roberts in Grist rubbed me the wrong way, at least a little.

It looks like I'm not the only one. Two people I think highly of responded at some length, Ken Ward at Coal Tattoo and WV native Jeremy Richardson with the Union of Concerned Scientists.

On a more positive note, WV Senate President Jeff Kessler announced the formation of a 13 member senate task force on the southern coalfields going by the acronym SCORE (Southern Coalfields Organizing and Revitalizing the Economy), which will hold listening sessions with coalfield residents and develop legislative proposals to assist the region. SCORE is modeled in part on Kentucky's SOAR (Save Our Appalachian Region) program.

Some ideas the group will explore include

Kessler and his fellow senators deserve a lot of credit for taking this on. You can find more about SCORE here and here.
by El Cabrero No comments:

There's no doubt about it. These are hard times in the southern WV coalfields. Unfortunately, while the rhetoric is white hot (accent on white, by the way), straight talk is hard to find, especially in an election year. Here's a glum assessment of the current state of political debate here from my friend Ken Ward at Coal Tattoo.

On the positive side, some state leaders want to actually do something about it. State Senate President Jeff Kessler is holding a press conference tomorrow announcing the creation of a coalfield revitalization initiative. Obviously, it's way too soon to even guess how this will go but I think it's a big step forward just to create a task force to talk about the issues.

Meanwhile, people are starting to talk about the idea of some kind of federal assistance for displaced miners. Here's a piece from Grist titled "Should the feds bail out coal miners?" My short answer to that is, yes, as in programs modeled on other efforts to help workers displaced by trade agreements.

As I mentioned in an earlier post, Republican WV Congressman David McKinley introduced a bill with a Democratic co-sponsor from Vermont to do something like that. The odds of it making it through congress any time soon don't look good, but it's another step in the right direction.

Another positive step that I've mentioned before is the What's Next, WV? effort, which is going to hold deliberative forums all over the state about our economic future.

None of this, however, is a big help right away to the over 5,000 miners who have lost jobs in southern WV over the last few years due mostly to shifting market forces.
by El Cabrero No comments:

A meme is born 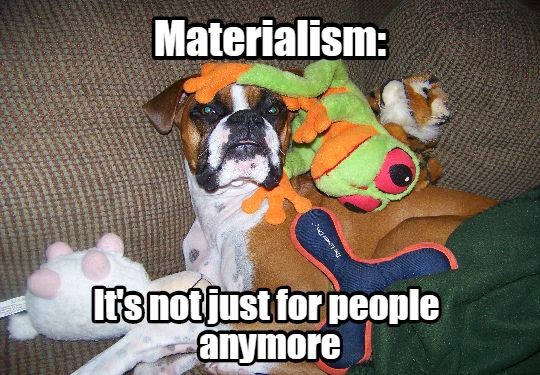 For someone who has been blogging for several years, I'm pretty behind on social media. One thing I have recently resolved to do is to learn to make memes for Facebook and such. I mean hard hitting social justice memes. But today, just to see if I could make one at all, I resorted to a gratuitous animal picture of Edith and her toys. Hard hitting social meme content to come. Just probably not today.

ANNALS OF URBAN AGRICULTURE. A while back the city of Charleston WV passed an ordnance allowing city residents to own chickens and such. Here's one nice success story. Meanwhile, the hens at Goat Rope Farm have either permanently retired from egg production or have gone on strike.
by El Cabrero No comments:

I've mentioned more than once that I recommend Ian Haney Lopez's bew book Dog Whistle Politics: How Coded Racial Appeals Have Reinvented Racism and Wrecked the Middle Class. I was drawn to the book after the dog whistling in WV politics became audible as the 2014 election approaches.

Dog whistling refers to  the art of making coded and often oblique and indirect but loaded references to race that stop short of expressions of personal hatred. The purpose of dog whistling isn't to express personal bigotry but to gain power, wealth and status. These messages convey a warning to white voters about presumed threats from non-whites aimed at building support for a reactionary agenda.

Lopez has a great analysis for how the game is played. Here are the basic moves:


(1) punch racism into the conversation through references to culture, behavior, and class; (2) parry claims of race-baiting by insisting that absent a direct reference to biology or the use of a racial epithet, there can be no racism; (3) kick up the racial attack by calling any critics the real racists for mentioning race and thereby "playing the race card."

Sadly, it seems to have worked pretty well for some folks for more than 30 years.
by El Cabrero No comments: