Why wait? Remembering before November 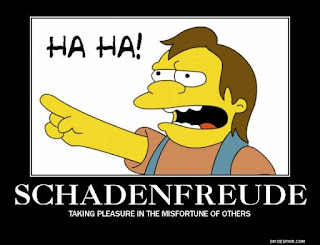 A quick glance at social media in the wake of WV's primary election results has led me to issue this proclamation: the word of the day is schadenfreude. It's German for the pleasure some people--not me, of course--derive from the misfortunes of others...especially when they seem to be well deserved.

(I couldn't find the German word for the specific pleasure victorious teachers and school employees feel when one of their adversaries loses an election. If it doesn't exist, it should.)

There are lots of giddy and gleeful memes and tweets circulating celebrating the landslide victory of pro-union and moderate Republican Bill Hamilton over the inflammatory state senator Robert Karnes, who once referred to union members as "free riders."

Hamilton, who served many terms in the WV House, won by a margin of 63 to 37 percent in a very conservative district. Karnes seemed to go out of his way to antagonize education workers during WV's recent successful teacher's strike.

According to this Vice report, of the 115 candidates endorsed by the WV Education Association, 99 won. The WV AFLCIO likewise did pretty well.  While we're at it, here's more coverage by AP, the Gazette-Mail, and WV Public Broadcasting.

In terms of a blown opportunity, I still say that Senator Joe Manchin was a huge loser in not publicly championing striking education workers like Ojeda did when he had the chance. To be fair, Manchin was quietly supportive, but the situation and the moment called for more than that. He'll face a tough race in November and could easily have had a lot more enthusiasm behind him. I believe in baseball that's called an unforced error.

Manchin tries hard to be bi-partisan, but the love he shows to the Trump administration seems to be unrequited. I kind of wonder how that's working for him.
by El Cabrero No comments:

The boot or the face?

For some reason, “1984,” George Orwell’s book about a nightmarish society, has had a revival in the Trump era.

The New York Times reported it was top of Amazon’s list in early 2017. Around the same time, Penguin USA reported a 9,500 percent increase in sales over a few days. It’s a hot item nearly 70 years since its publication.

A haunting line from the book that has stuck in my mind: “If you want a vision of the future, imagine a boot stamping on a human face — forever.”

Some days I think that might not be too far off — unless we act to prevent it. There are dangerous trends that, if unaddressed, point towards a disastrous future.

The top two are economic inequality and climate change.

Let’s start with inequality, which is reaching record levels and is likely to worsen, since returns from wealth grow much faster than productivity or wages. This doesn’t just impact life chances; it affects the length and quality of life itself.

Research shows that one’s relative position within society has a huge impact on health and longevity. People in higher social positions tend to live longer and be healthier than those below them — even if you control for behavioral factors such as smoking, exercise, obesity and diet.

Studies by British epidemiologist Michael Marmot suggest that the key ingredients to longevity and health are a sense of control over one’s life and the ability to fully participate in society. These diminish as we move down the ladder.

According to Marmot, “It is inequality in these that plays a big part in producing the social gradient in health.” The wider the divide, the sharper are the effects.

While social problems pile up at the bottom, “The effects of inequality are not confined to the poor. A growing body of research shows that inequality damages the social fabric of the whole society.”

The concentration of wealth makes it easier for the very wealthy to buy political influence and further stack the deck, endangering democracy. One person/one vote is turning into one dollar/one vote. It’s a self-perpetuating cycle, with the state, including its means of repression, effectively being captured and controlled by economic elites.

Overheated economic systems are also prone to catastrophic recessions and depressions, which have devastating impacts on communities, as we saw during the most recent recession.

Widespread inequality increases social tensions around the world, and the frustration it causes is a fertile breeding ground for toxic political movements, hate groups, religious extremism, armed conflict, racism and scapegoating vulnerable people. Movements such as these feed on the pain but ultimately will fail to cure it.

In the worst case, authoritarian political movements can gain political power and use it to advance the interests of elites while repressing popular resistance. It’s happened before and the results weren’t pretty.

Unfortunately, the same inequality of economic and political power is also being used to block meaningful action on climate change, since those who profit from a fossil fuel economy prefer short-term profit to long-term sustainability.

The playbook is pretty obvious: use wealth and political clout to delay action on climate until it’s too late, then say it was going to happen anyway.

And that fun is only beginning.

If this keeps up, things don’t look good for the human face. The smart money will be on the boot.

I’m not sure what it will take to keep that from happening, but it probably won’t be business as usual.

In 1933, the great German Christian theologian Dietrich Bonhoeffer pondered what a just response from people of faith would be required to deal with the evils of his time, particularly the persecution of the Jews.

He came up with three possibilities.

One was to “ask the state whether its actions are legitimate and in accordance with its character as state, i.e. it can throw the state back on its responsibilities.” That’s worth a shot, even though it hasn’t worked too well lately.

Another option was to “aid the victims of state action,” since “the church has an unconditional obligation to the victims of any ordering of society ...” That’s always in order, even if it doesn’t solve the problem.

The third option was a bit edgier: it was “not just to bandage the victims under the wheel, but to jam a spoke in the wheel itself.”

(This appeared in today's Gazette-Mail.)
by El Cabrero No comments:

Living in West Virginia, you can get way too accustomed to only bad news from our state being broadcast to the national masses.  But these days, it sure feels good for West Virginia to be considered a harbinger of the mass movements springing up around the country.

In this Sunday’s New York Times opinion piece (that features our buddies Cathy Kunkel and Ryan Frankenberry—woot woot!), Noam Scheiber points out that while all the states with teacher uprisings recently are so-called right to work states, and therefore weakened unions, unions are as vital as ever to build on recent gains.

In unrelated news, Xie Lan here shares Phil Kabler’s misty-eyed sentiment on losing Charleston Amtrak train station’s last station attendant, and the potential elimination of our beloved Cardinal line (woe would be me!).  I have the fondest memories of that station, awaiting arrival of family, placing pennies on the track to find them ironed perfectly flat after the train pushed out of the station, and most exciting of all climbing those big steps onto the train. One of our family’s most cherished trips was a cross-country train trip on Amtrak when I was 8 years old, a trip I hope to recreate with my own kids.

Last word is from our own Liz Brunello who wrote this opinion piece in the Sunday Gazette Mail about the need for a living wage in Charleston.  Preach it Liz!