Tis a consummation devoutly to be wished

Here's a little item to think about this weekend. According to the State Journal, federal prosecutor Booth Goodwin had this to say about the Upper Big Branch mine disaster investigation:

We want to bring any individuals responsible to justice. We also want to get to the bottom of just exactly what happened there. Those two goals are not mutually exclusive and I would anticipate we'll be prepared to make an announcement very soon.


In other words, the show ain't over yet. I'm all ears. Very soon can't come soon enough.
by El Cabrero No comments:

According to projections, coal production in southern West Virginia is likely to go down in the coming years. However, this may not have the same long term impact on jobs. As this blog post from the WV Center on Budget and Policy points out, there is some chance that employment may actually rebound or even increase over the long term.

Going after highly priced but relatively scarce metallurgical coal, most of which is underground, may require more "miner hours," which adds up to more work for miners.

Of course, all of this is speculation. Southern West Virginia is headed for a rough transition regardless and it makes sense to prepare for that by convening an economic transition task force and by creating a Future Fund so that West Virginians in the years to come will enjoy some of the fruits of the extraction of non-renewable resources.

Blaming the president and the EPA for problems that go way beyond either, which is the sport of many of WV's political leaders, is intellectually and morally dishonest. And it just plain won't work in the long term. Whether southern WV is in for a hard or soft landing, we need to prepare.

CHILDHOOD NEGLECT is bad for the brain.

STRANGENESS may improve creativity. That explains a lot. 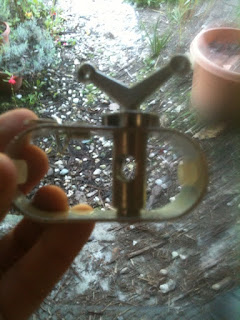 There are certain hallmarks of a true Appalachian accent, at least in El Cabrero's neck of the woods. One of these is the fact that we pronounce certain words alike, even though they are spelled differently. Examples are words like pen and pin and ten and tin, both of which are pronounced like the latter by any self respecting hillbilly.

I thought about that this weekend when I ran around to several stores in search of a winch to tighten a cable. It turns out that the same pronunciation thing applies to the words winch and wench. The possibilities astounded me. I must admit that I was tempted to run into crowded retail establishments and holler out, "For the love of God, where can a man find a decent we/winch in this state?"

I was only restrained by my uncommonly overdeveloped sense of propriety and deportment. Oh yeah, and of my unflagging respect of Appalachian womanhood.

UP AND RUNNING. Here's more on WV's newly established Office of Minority Affairs.

LIKE THE GOOD OLD DAYS. There was a good old-fashioned union rally in Charleston on behalf of coal miners who may lose retiree health care and pension benefits as a result of Patriot Coal's bankruptcy. I'd say there were 2000 or so people there, maybe more. I took pictures and would write more about it but I'm too tired at the moment. I'll think about that tomorrow. As Scarlett said, "Tomorrow is another day."

A win, a loss, a rant and such 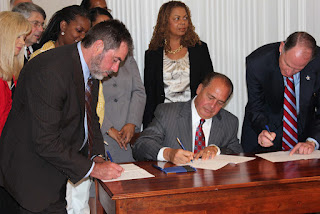 I love a bill signing--especially when it's a good bill that people fought long and hard to pass. Monday was such a day. As pictured above, WV House Speaker Rick Thompson, Governor Earl Ray Tomblin, and Senate President Jeff Kessler ceremonially signed a bill creating the Herbert Henderson Office of Minority Affairs, which is charged to address issues of racial, ethnic and gender equity. It will be directed by Dr. Carolyn Stuart. The room was packed for the signing. 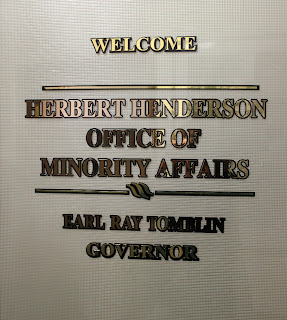 I spent a good chunk of the past two and a half years pushing for this and it was nice to see the day when the office was up and running. I especially liked seeing the above sign right across the hall from the Governor's Office. That was about as tangible as you can get.

A WEST VIRGINIA ORIGINAL. Many people in WV and beyond were shocked by the sudden death of Larry Gibson, a vocal and active opponent of mountaintop removal mining. He was absolutely fearless and relentless in pursuit of what he believed. Here's Ken Ward on his passing.

THE LATEST RANT. Here's an op-ed by yours truly on the state of working West Virginians.

ARPAD UPDATE. I'd like to thank those who sent messages of concern about the travails of our Great Pyrenees Arpad who is suffering from the after effects of a broken leg. The latest is that he is back at the vets for a day or two for observation.