Has the worm turned? 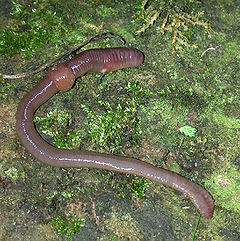 
I have lived most of my life in a time of widening economic inequality and have been making noise about it for a long time now. For years, it seemed like people were just getting used to it. As one of Dostoevsky's characters put it (I think it was in Crime and Punishment), "Man gets used to anything--the scoundrel."

But lately it seems like that may not be the case. More and more people are talking about it. It's front and center in political debates these days. Something weird must be up when predatory capitalism becomes an issue in the Republican presidential primary.

I think for all its quirks, the Occupy Wall Street movement deserves a lot of credit for surfacing the issue and getting it out there. The whole 99 percent/1 percent thing has become a bit of a meme, a term invented by Richard Dawkins to describe an idea or phrase that catches on.

It's still too soon to tell whether this is a sea change or a flash in the pan. But a turning worm would be nice.

THIS IS YOUR BRAIN on politics.

El Cabrero just read his first John Le Carre novel, to wit The Spy Who Came In From the Cold. This is probably going to sound really bad but it kind of made me almost nostalgic for the Cold War. When it came to an end, while other people were celebrating, I remember wondering what other kinds of demons would be loosened which had been held in check before. It turned out to be quite a few.

I hope I'm wrong about this, but it occurred to me then that the dangers of the future might make that nearly 50 year period of relative equilibrium, also known as a balance of terror, look like good old days.

On that cheery note, here are a few items that caught my eye today...

RATING THE SOTU. Here's Lawrence Mishel of the Economic Policy Institute on President Obama's state of the union address.

DUMBING US DOWN. Working in groups can do just that.

DOGS appear to have been domesticated as long as 33,000 years ago. Next question: have they found any fossilized squeaky toys?

I have always felt that there is a lot to be learned from physical exertion. An example of that occurred to me after I started training for and running (or limping) in races again after knee surgery this summer.

Here is the life lesson I learned: there is absolutely no necessary connection between feeling good and doing OK. By that I mean that one can feel totally miserable and still meet or exceed goals. In one recent 5 mile race, my legs felt like broken dead sticks, my lungs burned and my feet hurt with every step. But I finished a few minutes ahead of my goal (though admittedly way behind most other people).

It would be nice to feel good when you're up against a challenge. It may even have happened to me at some point in the distant past, although I can't recall it. But it's not required. What is required is to keep going.

OPTIMISM, ANYONE? Paul Krugman seems to see sun shining through the economic clouds.

FEEDING THE TROLLS. Here's an op-ed by yours truly on why WV needs an office of minority affairs to address racial disparities.

AN UNFORTUNATE MEME: the welfare queen. 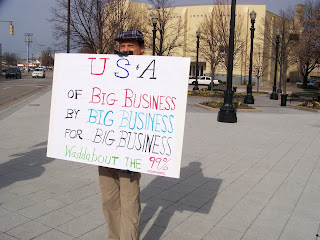 Last Friday marked the second anniversary of the Citizens United Supreme Court decision, which gave corporations even more power than they had before to corrupt democracy. 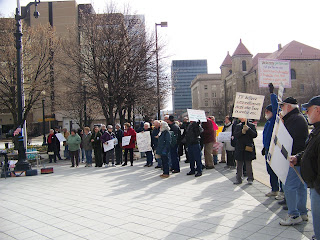 That day, over 100 people gathered in Charleston, WV, as they did around the country to make a statement that this was not cool. 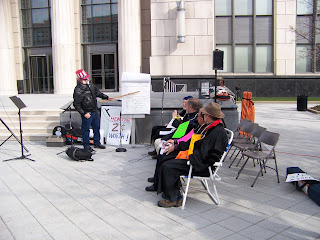 One of my favorite parts of the event was a bit of street theater in which Uncle Sam tried to teach certain justices the difference between real people and corporations. 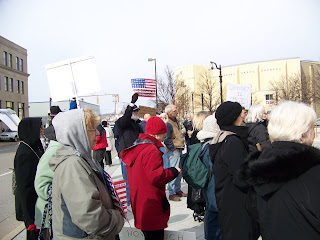 All kinds of people showed up. 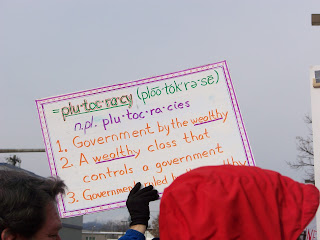 Of course there were signs. This was one of my favorites. 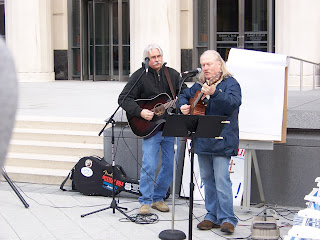 And there was music, including a song by Little Steven aka Steve van Zandt which I hadn't heard for years. If you recall, Little Steven is part of Bruce's E Street Band and played Silvio Dante on The Sopranos.

A good time was had by all.
by El Cabrero 1 comment: