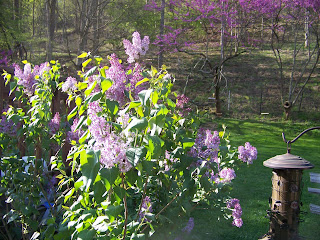 Well, I survived my trip to Okinawa. Although I didn't get along too well with the local food and came to equate economy class overseas travel with Bush-era "rough interrogation" methods, it was all I hoped it would be and more. The dark side of the journey was the shadow of the Massey mine disaster that occurred shortly after I got there.

But even the awaiting bad news couldn't completely overpower the sheer beauty of April in West Virginia. During the time I was away, the redbuds, lilac and wisteria bloomed like madness. I loved the hard karate training in the Budokan and in the private dojo in Naha but love the holler I live in and the various creatures that inhabit it, human and otherwise, more.

To live in West Virginia and to work on social justice issues (sorry, Mr. Beck) is always to be engaged in some kind of the strife that the ancient Greek philosopher Heraclitus regarded as "the father of all things." But it also is to be surrounded by natural splendor and social richness.

So here's to the beauty and the fight. Game on!
by El Cabrero 1 comment: 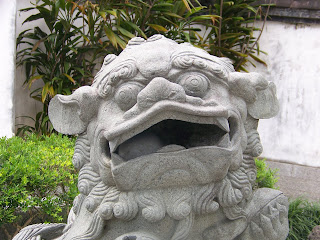 It's my last night in Naha and a misty rain has set in over the city. I've been here 10 nights, not counting an airline eternity before and one awaiting tomorrow. As chance would have it, the trip's timing wasn't the best. The Massey Upper Big Branch Mine disaster happened shortly after I arrived, leaving me feeling torn.

Yet the trip has delivered all I hoped. I came to drink from the fountain of real karate. I've dreamed of this for most of my life and trained hard for it the last couple of months as it became a reality.

I wanted to sample the authentic styles of Goju, Shorin, Uechi and Isshin ryu. I wanted to see and learn katas uncontaminated by American meatball martial arts. I wanted to learn the proper forms of the tanren or forging katas of Shuri and Naha te, naihanchi and sanchin respectively, all of which happened. I even had the chance to train a couple of times in the private dojo of Hanshi Minoru Higa with only a handful of other students.

I also had the privilge of participating in this karate seminar with many thoughtful people as devoted to the art as I am. Most of us stayed a little beyond the end of the seminar. Now people leave one by one or in small groups. Just like in real life.

These 10 or so days have been an eon in some ways, a milestone I'll never forget. It's been a kind of homecoming as this was where my path in life began long before I was born. I hope to come back someday, but some of it is coming home with me.
by El Cabrero 2 comments: 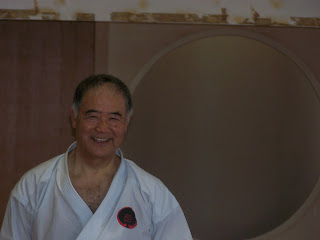 One of my favorite parts of the original Wayne's World movie was when Wayne and Garth got back stage passes at an Alice Cooper concert. At first, they waved their passes around, showing them off to one and all. But when they actually made it backstage with Alice, they couldn't handle it and fell to the ground saying "We're not worthy!"

I kind of felt that way Friday, the last official day of the karate seminar in Naha (luckily I didn't hurl). The morning's instructor was traditional Goju master Morio Higaonna Sensei, whose status in the karate world is above rock star and somewhere just below deity.

Now in his 70s (like most of the teachers this week), Higaonna is still extremely powerful and his technique is something to behold. It's hard to take one's eyes off his hands, which have been conditioned by decades of makiwara (striking board) and other training to the point where they are truly lethal weapons.

The good news is that he is actually very gentle, humble and self-effacing. He has an amazing presence and is a truly spiritual person. He also made a few Karate Kid jokes--there really are techniques that look like wax on/wax off.

We were expecting to be drilled to exhaustion, but he took it fairly easy on us, working on body movement or tai sabaki and fighting applications from kata. At the end he spoke about karate as a peaceful discipline, quoting the old Okinawa proverb karate ni sente nashi--in karate there is no first attack.

As an example, he told of the dark post-war days when many people were driven to desperation and attempted to rob others. Chojun Miyagi, the founder of Goju, made it a point to always carry a little money and always gave it to anyone who demanded it without a fight. Note: he could have whacked them without really trying.

Another sensei put it like this: in other styles of martial art, people train to win. In Okinawa, we train so as not to be conquered.
by El Cabrero No comments: 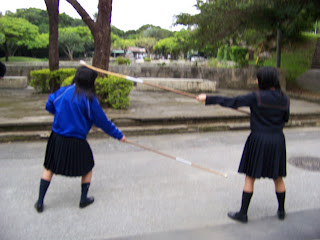 Today I won't dwell on bad news but rather remember a magic moment that reflects a little of the kindness and hospitality of the Okinawa people.

One day last week as our afternoon training session ended at the prefectural budokan (martial arts training faculty), we were hanging out in the adjacent park and beginning to think about returning to the hotel when a group of schoolgirls came by on their way to naginata training.

A naginata back in the day was a weapon, kind of like a staff with a blade on it. Women often trained in it to protect the home when the men were away. Today, naginata-do is practiced as a budo, or martial way of spiritual and physical cultivation. The metal blade has given way to wicker and bamboo.

They tried their English on us as we greeted them back in Japanese. I suppose they are used to Western karate pilgrims. We pointed to their naginatas and used our hands to ask for a demonstration in the park.

It didn't take a whole lot of persuading. They demonstrated several two-person kata or training exercise, giggled and bowed. We bowed, applauded and giggled as well and then we waved goodbye.

Just another day in Naha ...
by El Cabrero 1 comment: