The time has come, the walrus said

I have several things on my mind heading into the weekend. First off, I'd like to acknowledge the sacrifices made by this country's veterans past and present and to express my hope that in the future fewer will have to go through the ordeal of armed conflict.

Second, one thing that really gets my goat, no pun intended, is the stupid war waged by government agencies against small farms and real food. It's ironic that laws and bureaucracies impede the local food movement while tolerating an industrial "food" system that tortures animals, exploits labor and ruins the environment.

Here's a pretty horrific example of fascism against farm and food from the state of Nevada.

Regular readers of this blog know that I often defend the role that government can play in regulating capitalism and countering its excesses--but this kind of thing doesn't really help in that department. It is this kind of outrage that turns otherwise normal people into libertarians.

Finally, I'm off this weekend to attend an intensive yoga seminar. I have a feeling it will be tougher than the karate training I did in Okinawa a while back. I did, however, have this insight on the difference between ju jitsu and yoga:

In ju jitsu, you apply painful joint techniques to your opponent; in yoga you do it to yourself.

This is what happens when boxer dogs watch The Godfather 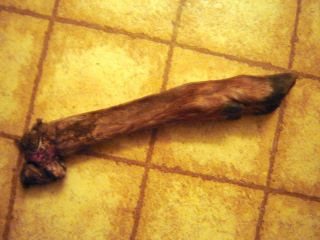 Sometime this past summer, when the Spousal Unit was away, I watched the Godfather movies. Apparently Edith, our boxer, was paying attention. As said Spousal Unit put it in her Facebook page yesterday,

Dogs don't get that playing Godfather isn't for everyone. (ok so it's not a horse head but stepping out of the shower to this was pretty shocking).

However, it probably had less to do with mob vendettas than with the abundance of "gifts" that hunters leave in the woods this time of year, of which this deer leg is but one example.

OCCUPYING THE HOMELESS. Here's a look at the developing and sometimes bumpy relationship between the Occupy protests and homeless people around the country.

WHAT DOES IT MEAN? Here's a look at progressive victories in this week's elections and what they may mean going forward.

SHELLACKING ON THE RIGHT. Here's E.J. Dionne on the same.

A hearty congratulations to voters in Ohio, who delivered a stunning rebuke to union busters and others who wished to declare open war on the middle class. CNN projects that voters defeated attacks on collective bargaining by a measure of 62 to 38 percent.

That should be a major setback to the plutocratic agenda (and, I hope, the tripartite alliance of greed, ignorance and hatred on which it depends for political success). It would be nice to think that some kind of change is in the air.

Here's the NY Times on yesterday's elections. Aside from the victory in Ohio, I think it's interesting that voters in Mississippi rejected a strict anti-abortion measure.

The whole thing of what constitutes a person is a bit murky these days. I modestly propose that we focus instead on distinguishing between real people and corporations. Sorry, Mitt.
GOAT ROPE ADVISORY LEVEL: ELEVATED
by El Cabrero 4 comments: 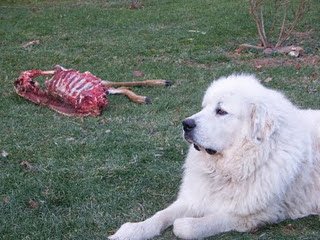 Arpad, shown here with booty from a past hunting season, is a firm believer in the generosity of the universe.

It's getting to be the favorite season of Arpad, Great Pyrenees and chief of security at Goat Rope Farm. From his perspective, it's way better than Christmas.

Instead of just one Santa Claus, the woods this time of year are full of gift bearers armed with hunting rifles, shotguns, and bows who seem to come for the express purpose of leaving offerings for the lucky canine.

At this time of year (and through the winter) he is apt to disappear on foraging runs and emerge from the woods with any number of hides, bones, or internal organs of dead deer.

I noticed the official opening of his blessed season this weekend when he showed up with a dirty snout and no interest in his regular food. I can hardly wait to see what he drags home next.

STIGLITZ ON THE GLOBAL PROTESTS. Here's a Nobel laureate on the protest movements that have swept the world this year.

...unfettered markets lead to economic and political crises. Markets work the way they should only when they operate within a framework of appropriate government regulations; and that framework can be erected only in a democracy that reflects the general interest – not the interests of the 1%. The best government that money can buy is no longer good enough.

THIS IS THE BRAIN on cooperation.

To start off the week

Here's some disturbing news about the state of the economy: most of today's unemployed aren't eligible for unemployment insurance anymore. And before anybody opens a can of libertarian dreck, here's a reality check: there are four unemployed Americans for every one new job.

THE NEWEST GENERATION GAP is economic.

THAT "WAR ON COAL," assuming it exists, isn't going too well, hissy fits of the industry and its lackeys to the contrary.