Santiago, here I come. I hope.

A while back I got bit by the Camino bug and it won't let go. The Camino de Santiago Compostela is a pilgrimage route across northern Spain to a cathedral devoted to St. James the Greater, brother of John and one of the 12 disciples. There are many routes but the one that bit me begins in southern France and crosses the Pyrenees.

(In reality, the one place where one is NOT likely to find relics associated with James is probably northern Spain, but reality should never get in the way of a good pilgrimage.)

Anyhow it's a walk of around 480 miles, mostly through rural areas and I'm hoping to start this coming Tuesday. I'll post some from the road if tech and time permit. I'll be back before election day. Being gone during all that will probably mean dodging a few hundred robo-calls anyhow.

Meanwhile, here's one of my favorite travel poems, which has shown up here before when road trips beckon. It's a sample from Walt Whitman's Song of the Open Road:

Henceforth I ask not good-fortune—I myself am good fortune;
Henceforth I whimper no more, postpone no more, need nothing,
Strong and content, I travel the open road.

The earth—that is sufficient;
I do not want the constellations any nearer;
I know they are very well where they are;
I know they suffice for those who belong to them...

I think heroic deeds were all conceiv’d in the open air, and all great poems also; I think I could stop here myself, and do miracles;
(My judgments, thoughts, I henceforth try by the open air, the road;)
I think whatever I shall meet on the road I shall like, and whoever beholds me shall like me;
I think whoever I see must be happy.

From this hour, freedom!
From this hour I ordain myself loos’d of limits and imaginary lines,
Going where I list, my own master, total and absolute,
Listening to others, and considering well what they say,
Pausing, searching, receiving, contemplating,
Gently, but with undeniable will, divesting myself of the holds that would hold me.

I inhale great draughts of space;
The east and the west are mine, and the north and the south are mine.

I am larger, better than I thought;
I did not know I held so much goodness...
From "Song of the Open Road," Walt Whitman

Tough times to come of age 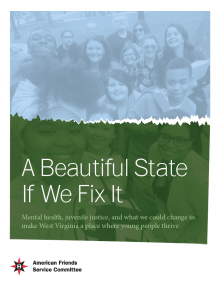 Growing up is never easy, but these are particularly tough times for young people in West Virginia, given the opioid crisis, the ballooning foster care population, hard economic times, trauma and all that. As we've argued many times in the past, state bureaucracies seem more comfortable disciplining or confining young people than finding out what's really going on.

That's one of the reasons the two American Friends Service Committee projects in WV teamed up to work on a listening project. Over the last year, we surveyed and interviewed over 100 high school students and people who work closely with them. The results are summarized in this report, including many quotes by those we interviewed.

Some themes were loud and clear (buy you'll have to click the link to see them).

The title came from a moving interview we did with some young men in a day report center in Boone County. One of them said "This could really be a beautiful state if we fix it." Can't sum it up any better than that.

A little background.... A couple years ago, the legislature considered passing a Mental Health Matters bill. The idea was to put together a task force on juvenile mental health to see what we have and, most importantly, what we don't.

It was a kittens, angels and puppies bill that would have cost the state little or nothing but might have eventually helped a lot of kids. Guess what? It died, probably because union busting seemed like more of a priority to the legislative majority.

As we argued in a report we released last fall, the next step in juvenile justice reform in WV would be assessing the mental health needs of young people facing suspension or out of home placement and whenever possible referring them to treatment rather than punishment.
by El Cabrero No comments:

Email ThisBlogThis!Share to TwitterShare to FacebookShare to Pinterest
Labels: A Beautiful State if We Fix It, juvenile justice, listening project, mental health 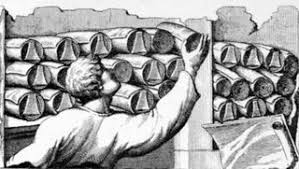 (This is what libraries looked like when I started working in them.)

All we need these days is another embarrassing story about West Virginia. Well, guess what? We got one. This one hit a little close to home.

First a digression. By an accident of fate, I spent 10 years working in public libraries in WV. I started out as a part time janitor after high school. In fact, I got some of my best reading done when I was supposed to be cleaning the little library in my home town.

After the big flood of 1978 trashed my town, including the library, there was a lot of extra work. Eventually I started working with the public. I really loved bantering with people, waiting on kids, helping people find the information they needed (even if they weren't very clear on it sometimes) and putting on programs people wanted to come to.

Aside from the whole poverty thing, it was a good gig.

Libraries are like little liberated areas carved out in the midst of the reign of greed. They are refuges for people of all ages and passports of the mind.They are places where people can make a fresh start on education, careers, and personal development. They are places that provide a venue for many diverse viewpoints.

They're also outposts of free speech and bulwarks against book banning. Or were meant to be.

That's where the groan comes in. A national news story recently broke about the library director in Berkeley Springs who tried to keep a copy of Bob Woodward's Fear off the shelves. Fortunately, the library board lost no time in reversing the decision.

I'm hoping that the exposure this incident has gotten sends a loud and clear message that this kind of **** is not to be tolerated.

The distance between book banning and book burning isn't that far.
by El Cabrero No comments: