El Cabrero has been a bit of a blogging slacker lately, a trend that may continue over the next several days due to road trips and such. I'm not sure whether it was a question of being tired or uninspired, but I guess the two might be related.

Anyhow, here's an interesting tidbit I came across lately from the book The Spirit Level: Why Greater Equality Makes Societies Stronger by Richard Wilkinson and Kate Pickett:

A dramatic example of how reductions in inequality can lead to rapid improvements in health is the experience of Britain during the two world wars. Increases in life expectancy for civilians during the war decades were twice those seen throughout the rest of the twentieth century. In the decades which contain the world wars, life expectancy increased between 6 and 7 years for men and women, whereas in the decades before, between and after, life expectancy increased by between 1 and 4 years. Although the nation's nutritional status improved with rationing in the Second World War, this was not true for the First World War, and material living standards declined during both wars. However, both wartimes were characterized by full employment and considerably narrower income differences--the result of deliberate government policies to promote co-operation with the war effort. During the Second World War, for example, working-class incomes rose by 9 per cent, while incomes of the middle class fell by 7 per cent; rates of relative poverty were halved. The resulting sense of camaraderie and social cohesion not only led to better health--crime rates also fell.

Three thoughts occur to me. One, it would be nice to get the same result minus the world war thing. Two, these days wars don't do much to reduce inequality. Instead, they only make it great in lots of areas.  Three, the Whackadoodle element would call the authors freedom haters.

NOT SO BAD. Here's economist Dean Baker on the latest jobs numbers, which are giving Whackadoodles hissy fits.

THERE IS A DIFFERENCE. Lots of people have wondered whether things have really changed since Massey Energy was bought out by Alpha Natural Resources. I've always said that whatever its flaws, Alpha is significantly less evil than Massey was back in the day. In fact, in the extremely unlikely event that I was in charge of Alpha, I'd make the company slogan be: "Alpha...we're less evil." Can you imagine former Massey CEO Don Blankenship talking like this?

A CROCODILE TEAR FOR PLUTOCRATS here. 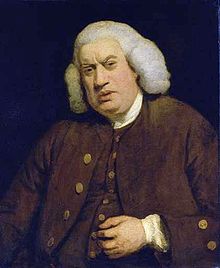 I've been making my slow way through James Boswell's Life of Samuel Johnson, mostly to indulge my affection for 18th century English prose. Johnson was an interesting person, one for whom conversation was a game of one-up-manship.

His political views were generally very conservative. His groundbreaking dictionary of the English language included the following definitions of the two parties of his day:


Tory: One who adheres to the ancient constitution of the state, and the apostolical hierarchy of the church of England, opposed to a Whig.

Whig: The name of a faction.

Yet on a critical issue of his day this hardcore Tory was ahead of his time. At one point, Boswell noted disapprovingly that "He had always been very  zealous against slavery in every form..." He even went so far as to drink a toast at Oxford in which he said "Here's to the next insurrection of the negroes in the West Indies."

Unlike Boswell, Johnson had no sympathy for the American revolutionaries of the 1770s. In fact, he put his finger precisely on a major contradiction of the period when he asked, "how is it that we hear the loudest yelps for liberty among the drivers of the negroes?"

FRAME THIS. Here's George Lakoff on what to look for in tonight's presidential debates.

IT'S NICE TO BE IMPORTANT, but it's more important to be nice. If you're a baboon anyway.

Yesterday I happened to attend a meeting of WV county officials and had a great conversation with a prosecutor from the southern coalfields who spoke of the awful epidemic of prescription drug abuse in that part of the state. Low income people and low income communities are the hardest hit.

Those familiar with WV will recall that these southern counties are both the ones from which huge amounts of coal have been taken and are also those with high rates of poverty and unemployment, big inequalities in terms of power, and not a whole lot in the way of empowerment for most people.

By chance, this morning I read the following passage about an experiment with monkeys in the book The Spirit Level: Why Greater Equality Makes Societies Stronger by Richard Wilkinson and Kate Pickett:

In a clever experiment, researchers at Wake Forest School of Medicine in North Carolina took twenty macaque monkeys and housed them for a while in individual cages They next housed the animals in groups of four and observed the social hierarchies which developed in each group, noting which animals were dominant and which were subordinate. They scanned the monkey's brains before and after they were put into groups. Next, they taught the monkeys that they could administer cocaine to themselves by pressing a lever-they could take as much or as little as they liked.

The results of this experiment were remarkable. Monkeys that had become dominant had more dopamine activity in their brains than they had exhibited before becoming dominant, while monkeys that became subordinate when housed in groups showed no changes in their brain chemistry. The dominant monkeys took much less cocaine than the subordinate monkeys. In effect, the subordinate monkeys were medicating themselves against the impact of their low social status.

Golly, it's a good that that never happens with people, huh?

ECONOMIC JUSTICE 101. Here's a take on the subject by yours truly.

ZOMBIE BEES? A friend of mine from upstate New York just sent me this link. Thanks, CR! The good news is that at least zombie bees don't eat other bees and turn the ones they bite into other zombies.