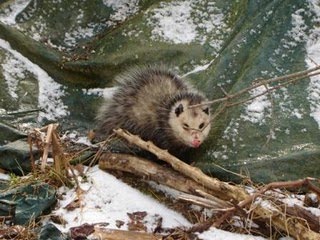 It has become something of a holiday tradition at Goat Rope to feature a different possum recipe here each year at this beloved national holiday. We firmly believe that one can never have enough possum recipes, although we would probably demure if it came to actually eating one.

This one is from Cooks.com and is called Possum cream pie. It's the best possum recipe we've found so far, mainly because possum wasn't an actual ingredient.

For Old School hard core possum enthusiasts, we also include this recipe for possum or bandicoot soup even though we are not quite sure what a bandicoot is.

Have a great Thanksgiving!
by El Cabrero No comments:

Nothing funny about it 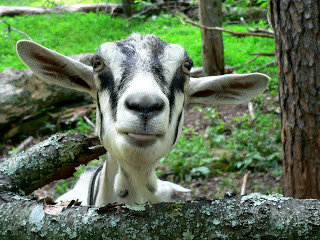 Arcadia S. Venus, pictured above, is another admirer of Brother Larry.

Last week I was asked to participate in the retirement roasting of Larry Matheney, a good friend who has served for years as secretary treasurer of the WV AFL-CIO. At such events, one is generally expected to say something funny about the occasion…which was precisely the challenge.

As a rule, I can find the humor, however grim, in just about any circumstance. When my late father was full of wires and tubes in intensive care, I told him not to bother getting up when I visited him. (He marshaled the strength to perform an obscene gesture in my general direction.)

My daughter recently reminded me that when I was being wheeled away to open heart surgery, I could be heard saying “They’re not gonna get my uterus.”

I have made jokes about any number of misfortunes and disasters.

But I could find absolutely nothing funny about the retirement of Larry Matheney. He is irreplaceable. Larry is a fierce and fearless voice for social justice. Coming from the United Steelworkers, Larry is a social unionist cut from the same cloth as that other native West Virginian labor leader Walter Reuther.

He’s the kind of person you want on your side in any serious fight for justice, whether it takes place in the streets or the halls of the legislature. He has always stood on the side of the disadvantaged, downtrodden and oppressed and he has always done whatever he could not just to make oppression bearable but to end it.

I’m not the only person to feel this way. I know plenty of people who as irreverent as myself who view Larry as a hero.

I wish him all the best in retirement. But mostly I wish he was still in the thick of the fight.

SPEAKING OF BROTHER LARRY, here's his latest rant in the Charleston Gazette. I love the cat food bit.

ONE GOOD RANT DESERVES ANOTHER. Here's another friend, the Rev. Matthew Watts on prison overcrowding.

AND HERE'S ANOTHER from the Rev. Jim Lewis. There's a great pun in there about generals and privates.

IN THE SPIRIT OF FAIR PLAY, here are a few words in praise of parasitic worms.

I would wager that most Americans are aware of the fact that inequality is growing, although people look at it  in lots of different ways. The Center on Budget and Policy Priorities has been doing a great series on this at their Off the Charts blog.

For a look at what is causing the widening gap, click here

For a state by state look, click here and here.

And for a look at four ways states can address the issue, click here.

Email ThisBlogThis!Share to TwitterShare to FacebookShare to Pinterest
Labels: inequality

This item caught my eye last week when I was traveling and attests to the fact that Whackadoodleism is alive and well. As Mother Jones reports, a prominent Georgia legislator gave a presentation in October to a local group along these lines:

President Obama is using a Cold War-era mind-control technique known as "Delphi" to coerce Americans into accepting his plan for a United Nations-run communist dictatorship in which suburbanites will be forcibly relocated to cities.


The presentation also included a comparative list showing the similarities between the agrarian policies of Stalin, Mao and the current occupant of the White House.

(Question: would a white president with similar policies provoke the same degree of Whack? I think not.)

I guess any day now the goats, turkeys, peacocks and chickens of Goat Rope Farm will be forcibly collectivized. On the bright, side that would make vacations a little simpler.

WHAT HE SAID. Here's Paul Krugman on the Twinkie era.

DIRTY DEEDS. Here's more on the negative consequences of the decision of the state school board to fire superintendent Jorea Marple.