Speaking of the Grinch...

The big news lately is Prince Joffrey's President Trump's government shutdown temper tantrum. But that's not the worst thing he's done this week. That honor would have to go to his decision to bypass congress and impose restrictions on basic SNAP food assistance to low income Americans.

Congress debated such measures for a good part of this year and wound up doing the right thing. Apparently, the president and his cronies couldn't let that good deed go unspoiled. You can read more about what that means here and here.

It's not over by any means. There are likely to be political as well as legal challenges. It's a good idea now to prepare to flood USDA inboxes when the proposed changes are up for public comment. Things might have to get a bit more interesting down the road.

IN A RELATED STORY...spiders could at least theoretically eat all humans on earth in one year.
by El Cabrero No comments:

Getting the band together again 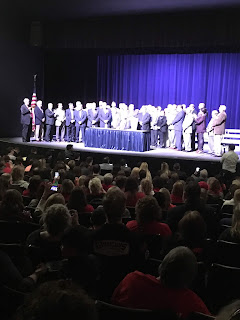 As we gear up for the 2019 legislative session, I have trouble wrapping my head around the fact that this time last year the great WV teachers' and school support workers' strike wasn't much more than an angry gleam in a few peoples' eyes. It was a real reminder to me that hope can come when least expected.

Still, there are unresolved issues. Last year's raise still isn't what these workers deserve. PEIA funding in unresolved. Worse, Senate Majority Leader Mitch Carmichael wants to eliminate the business inventory tax, which currently brings in $140 million per year, most of which goes to local school districts.

The promise apparently is that this cut, which mostly benefits out of state corporations, will create jobs and won't hurt funding for education....kind of like the last round of business tax cuts would create jobs and pay for themselves.

History doesn't repeat itself, but it's good to know that West Virginia can still go West Virginia on itself.
by El Cabrero No comments: