This one's for the wild old man 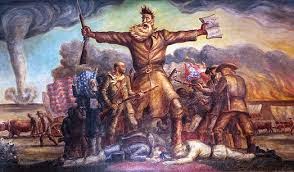 I'm not sure what I was thinking, but I signed up to do a marathon tomorrow. Not just any marathon, but rather Freedom's Run, which goes over the ground of John Brown's raid on Harpers Ferry as well as the battlefield at Antietam, which was the Union victory Lincoln was waiting for before issuing the Emancipation Proclamation.

I have a thing for John Brown and Harpers Ferry. Brown was like a monkey wrench thrown by God into the machinery of American slavery. His raid was a disaster in every detail even though in a way it succeeded on a grand scale. Similarly, Brown seems to have failed at pretty much every undertaking in life except the big one. It reminds me of some lines by Dylan about a lone soldier who won the war in the end "after losing every battle."

Then there's Antietam. That battle provided was is still the single bloodiest day in American history, with around 23,000 casualties. It was probably Union General George McClellan's best moment, even though he didn't follow through. By a weird coincidence, the Union army gained knowledge of Lee's planned Confederate advance into northern territory by sheer coincidence when the orders were found in an abandoned campsite wrapped around cigars.The Battle has been called "the crossroads of freedom."

Aside from geeking John Brown and the Civil War, the whole ancient Greek connection speaks to me as well. The name comes from the fields where the ancient Athenians defeated a much larger invading Persian army. By tradition, the runner who brought the news back to Athens 25 or so miles away said "Rejoice, we conquer" when he got there--and then dropped dead. (There's more to the story, but that will do for now.")

I thought my marathon days were over. My last as 12 years ago and I figured quadruple bypass surgery in 2004 put the kibosh on it. But I could never put the idea completely out of my mind. After the 2013 Boston Marathon bombing, the itch came back. I decided to shoot for Freedom's Run if I remained injury free, slow as I may be.

I'm not sure I'll make it to the finish line, what with a bad heart and a host of knee and foot injuries. I'd give 50/50 odds if I was into betting. I was a little discouraged to learn that the course becomes very hilly between miles 15 and 22--the point in the race where the major misery kick in. But then suffering is part of what you look for in a marathon and plenty of better guys than me met a worse fate at the same spot.

Game on. But don't wait up. This is going to take a while.
by El Cabrero No comments:

I mentioned in  yesterday's post that I worked with friends from the WV Center on Budget and Policy on a report about The State of Working West Virginia, something we've done every year for the last seven or so.

Anyhow, I'd like to point out some interesting things from the report that my friend Sean O'Leary dug up. It's all about one thing that is messed up with today's economy. According to conventional wisdom, "a rising tide lifts all boats." And sometimes it does. Just not so much around here lately.

People used to assume that if the economy was growing, jobs would too. And that if productivity went up, so would wages. Here's what Sean pointed out on GDP and jobs:


West Virginia ranked 3rd highest among the 50 states in real GDP growth from 2012 to 2013, at 5.1 percent. But the state ranked dead last in job growth, actually losing almost 7,000 jobs. West Virginia actually lost jobs even as the economy grew. In fact, the link between the growth of the economy (real GDP) and job growth has been weak for much of the past decade. While real GDP grew by 17.2 percent since 2002, job growth has been an anemic 3 percent

Ditto the wages and productivity thing:

West Virginia’s productivity, or economic output per worker, increased by 5.8 percent from 2012 to 2013, the third biggest increase among the 50 states. But just as growing GDP has not translated into more jobs, even though West Virginia’s workers are producing more, their pay has not reflected their production.

Since 1979, West Virginia’s worker productivity has increased by more than 50 percent, while median compensation, the wages and other benefits earned by the worker in the middle of the distribution, has only increased by 4.5 percent,,.Workers are benefiting little from both economic and productivity growth.

Holy surplus value extorted from the toiling masses, Batman! Just kidding. Mostly. But clearly something is out of whack.  One symptom of that is rising inequality. Sean again:

West Virginia’s economic growth and productivity gains of the past three decades have not resulted in widespread broad prosperity. Instead, more and more of the state’s wealth and income are flowing to the top, benefiting the wealthiest.

Because of that lopsided income growth, the share of income held by the top 1% in West Virginia has steadily grown since 1979, and is reaching historically high levels (Figure 2.4). And as the West Virginia’s economy grows more top heavy, the income gap widens. In 1979 the average income of the top 1% was 10.1 times higher than the average income of the bottom 99%. By 2011, that ratio had grown to 17.7 times higher.

The average income of the bottom 99 percent in West Virginia would be 12.3 percent higher if they still earned the same share of income they earned in 1979. That is equal to about $5,200 per person. Instead, those income gains were collected by wealthiest in the state.

Short summary: once upon a time in the USA, we grew together. Now, we're growing apart. And we will continue to do so at great cost to our democracy unless things change. Which means unless people change things.
by El Cabrero No comments:

Working for a living

You can be the first kid on your block to read a copy of the latest edition of The State of Working West Virginia, a publication of the American Friends Service Committee and the WV Center on Budget and Policy.

Come to think of it, you'll probably be the only kid on your block to read it...

*how WV recovered from the Great Recession. (Short answer: unevenly and we never got back many of the best jobs);

*the link between growing GDP (gross domestic product) and productivity and more jobs and higher wages. (Short answer: sadly, there isn't one around here these days);

*the northern gas boom and the southern coal bust. (Short answer: both are problems in different ways);

*how policy decisions can impact working families (Short answer: Medicaid expansion, good; corporate tax cuts that help drive up the cost of higher ed, not so much);

Yesterday I gave a shoutout to a new book titled Dog Whistle Politics by Ian Haney Lopez. The book's subtitle is How Coded Racial Appeals Have Reinvented Racism and Wrecked the Middle Class.

Two themes dominate American politics today: at the forefront is declining economic opportunity; coursing underneath is race. This book connects the two. It explains popular enthusiasm for policies injuring the middle class in terms of "dog whistle politics": coded racial appeals that carefully manipulate hostility towards nonwhites. Examples of dog whistling include repeated blasts about criminals and welfare cheats, illegal aliens, and sharia law in the heartland. Superficially, these provocations have nothing to do with race, yet they nevertheless powerfully communicate messages about threatening nonwhites. In the last 50 years, dog whistle politics has driven broad swaths of white voters to adopt a self-defeating hostility toward government, and in the process has remade the very nature of race and racism. American politics today--and the crisis of the middle class--simply cannot be understood without recognizing racism's evolution and the power of pernicious demagoguery.


Holy Obama's war on coal, Batman! In this case, the decline of an industry largely driven by market forces gets conveniently dumped onto a convenient scapegoat who just so happens to be...from Chicago, sort of.

The book also usefully talks about strategic racism, which "refers to purposeful efforts to use racial animus as leverage to gain material wealth, political power, or heightened social standing." Precisely because it is strategic, the author argues that "it is not fundamentally about race. The driving force behind strategic racism is not racial animus for its own sake or brutalizing nonwhites out of hate; it is the pursuit of power, money, and/or status." People of color are certainly damaged by it. Ironically, so are many white members of the working and squeezed middle class who fall for it.

This kind of dog whistling has long been a part of American politics, but it has been played masterfully by politicians from George Wallace, Nixon and Reagan up to the present day, sadly with considerable success.
by El Cabrero 1 comment:

Dog whistling in our time

I'd like to give a shoutout to Ian Haney Lopez's new book, Dog Whistle Politics: How Coded Racial Appeals have Reinvented Racism and Wrecked the Middle Class. The title gives a pretty good hint of what the book is about. I'm working my way through the book now and I keep thinking about how WV's political climate today is a classic example of dog whistling.  Anyhow, you can learn more about the book here.

SPEAKING OF WRECKING THE MIDDLE CLASS, check out this post from Robert Reich.

MIGHT AS WELL check out this one from Krugman while we're at it.
by El Cabrero No comments:

I would so do this too

A friend of mine send me a link this weekend to this Washington Post story about some scientists who contrived to sneak as many Bob Dylan lyrics as they could into papers they wrote for serious journals. If I were a scientist, no doubt I'd do the same. The sad part is that I can't think of an appropriate Dylan quote to use right now.

(Maybe it's because I'm burned out from exhaustion, buried in the hail, poisoned in the bushes and blown out on the trail...)

THIS IS SAD. It's about how schools in the coalfields are coping with declining enrollment as families move in search of work.

SO IS THIS. Scientists are trying to think of modern day Noah's arks to save species threatened by climate change.
by El Cabrero 2 comments: