On wanting to quit

El Cabrero has been a terribly inconsistent blogger lately. I think I've been running around too much.

Speaking of running around, today was a case in point. I've had a 15K run planned for some months, although I can't say I was looking forward to it. The race in question is the Poca River Run, which touts itself as West Virginia's oldest road running race.

It is a pretty 9.3 mile course along the river, which today was swollen from recent rain storms, including a fresh one that soaked me on the last few miles. I've gone farther on harder courses. For some reason though, running this one brings out the wimp in me. This year as last I wanted to quit just about as soon as I started. Everything seemed to hurt and go wrong for the first mile or two. It didn't get a whole lot better after that.

My back hurt. My lungs hurt. I had a bad pain in one heel from what turned out to be a hole in my sock. It's the kind of thing you can put up with for a good while but it would have really caused problems on a longer run. There were other aches and pains. But misery morphed into plain old discomfort as the miles ticked away.

I think one of the great gifts of endurance sports is just that. You learn to endure. You learn to watch pain and discomfort the way Buddhists do in vipassana or mindfulness meditation. Like everything else, pain is an impermanent thing. If you watch it, it doesn't usually stay the same. Sometimes it gets worse, sometimes better and sometimes it just migrates somewhere else.

You also learn not to obsess about the whole thing but rather take it one mile at a time. There seems to be some evidence for that thesis anyhow.

That reminds me of the statistics classes I took in graduate school, another endurance feat that I only managed to survive by making my teacher laugh and go off on lengthy tangents. On every test, one question persisted and it gave good advice for working through problems: 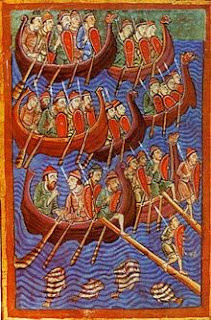 What better way to make it over the hump of the week than by cracking open a little Viking wisdom. Below, please enjoy some of these old Norse proverbs:

It is better to be a living man than a dead one. The living man can have a cow.

Brawl with a pig and you go away with his stink.

The slumbering wolf does not get the ham.

It is the still and silent sea that drowns a man.

WORDS. Some are really old.

COMING TO A COUNTY NEAR YOU. As a result of an amendment to WV Governor Tomblin's prison overcrowding bill, drug courts have been mandated for all counties by 2016.

...to inform or remind you that May is Zombie Awareness Month. Why May? Apparently, this is the month in which George Romero's classic Night of the Living Dead was set. Somehow, I missed that detail when I watched the movie. Supporters are encouraged to wear a gray ribbon "to signify the undead shadows that lurk behind our modern light of day.

The Zombie Research Society (ZRS), which promotes this public service, has a great slogan:

"What you don't know can eat you."


RANDOM THOUGHT.  Whilst posting this vital public safety information, the thought occurred to me of a great movie mashup: Saturday Night of the Living Dead Fever. "Staying Alive" would still be the theme song, although it might be a bit of a challenge.

Early childhood education: something else WV is getting right

As I mentioned in an earlier post, some good things have happened recently at the policy level in El Cabrero's beloved state of West Virginia. One big one of course was Medicaid expansion as announced by Governor Tomblin last week. Prison reform was another. Restoring funding for child care and family violence programs was another.

But one possible game changer has been largely unnoticed. During the regular 2013 legislative session, much controversy surrounded SB 359, the governor's education reform bill. Teacher's organizations went back and forth with legislators and administration officials in an effort to arrive at a livable compromise, an effort I supported

But one provision of the bill that wasn't controversial at all was its best feature: a major expansion of early childhood education. According to the bill's text,

Why is that a big deal? According to the Center for American Progress,

... investment in early education of disadvantaged children pays extremely high returns down the road. It improves not only their cognitive abilities but also crucial behavior traits like sociability, motivation and self esteem.

Studies that have followed children through their adult lives confirm enormous payoffs for these investments, whether measured in improved success in college, higher income or even lower incarceration rates.

Heckman himself, in a paper titled The Economics of Inequality: The Value of Early Childhood Education, sums up his findings in this way:

Since inequality starts at or before birth, it can and should be corrected at or before birth with the resource of early childhood and parental education. Evidence shows that supplementing the family environments of disadvantaged children with educational resources is an effective and cost-efficient way to provide equal opportunity, achievement, and economic success...

The logic is quite clear from an economic standpoint. We can invest early to close disparities and prevent achievement gaps, or we can pay to remediate disparities when they are harder and more expensive to close.  Either way we are going to pay. And, we'll have to do both for a while. But, there is an important difference between the two approaches. Investing early allows us to shape the future; investing later chains us to fixing the missed opportunities of the past.

Controlling our destiny is more in keeping with the American spirit.

So congratulations, West Virginia, for getting something else right.
by El Cabrero 1 comment: