Sometimes when I'm on the road or working late or early, I prepare a blog post in advance and schedule it to run in the morning. Each time I do that, I cross my fingers that nothing really awful happens between the time it was scheduled and the time it comes out.

I was fairly lucky for a while, but sooner or later it was bound to happen. This morning as I dragged out to get some motel coffee I was stunned by the images of destruction coming from Japan. It looked like the special effects crew of a disaster movie pulled out all the stops, but this time it's real. Some type of damage can be expected today over vast stretches of the Pacific.

For all the good it will do, my thoughts go out to all those affected by this devastation.
by El Cabrero No comments:

I'm on the road battling a weird internet connection so this will be short. Here are two items that caught my eye:

THE RELATIVITY OF VICTORY AND DEFEAT. Wisconsin may be a case in point.

ATTACKING THE ENVIRONMENT. The first wave was turned back, but there will be more. 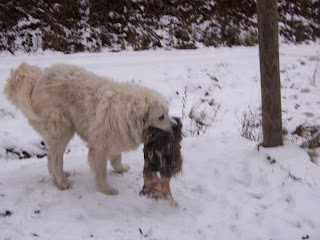 It's all fun and games until somebody loses a head. At least that's the case in Beowulf, the theme here lately. I've been working my way through the first English epic for a while now and am on Monster #2 at this point. If this is your cup of mead, click on earlier posts. You'll also find links and more or less snide comments about current events below.

After Beowulf kills Grendel, there is much rejoicing in Heorot, the mead hall of Danish king Hrothgar. He hasn't been able to use his prize hall for years, since Grendel had the not-so-endearing habit of eating people who hung out there. The Danes reclaim the hall, although Beowulf sleeps somewhere else.

That night, Grendel's mother comes back for revenge. She is eventually driven off, but only after taking Hrothgar's trusted advisor Aeschere with her. They find his head the next day near the haunted mere, which is a lake or swamp where the monsters live.

After the attack, Hrothgar summons Beowulf and asks him to step up one more time. Beowulf gives the following classic lines, which kind of sum up his warrior ethic:

Wise sir, do not grieve. It is always better
to avenge dear ones than to indulge in mourning.

This is one part of the poem where the thin veneer of Christianity gets even thinner, but I must admit to feeling that way myself some days. It's kind of the proto-Viking version of the old labor saying, "Don't mourn, organize!"

PLEASE STEP AWAY FROM THE BUDGET CUTTING KOOL-AID, Senator Manchin.

INSTEAD, consider this. A new poll shows a majority of Americans favors cutting military spending rather than cutting vital social programs.

DIRTY DEEDS done dirt cheap. Maybe we should impose a no fly zone over Wisconsin.

THE WORD OF THE DAY is philanthro-feudalism.

SPEAKING OF WHICH, this is totally Koched up.

NOTE: This post was scheduled in advance due to much sleep deprivation. Well may the world go. 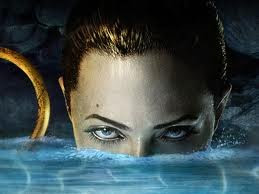 I've read and re-read Beowulf several times in recent months and still can't find the part where Grendel's mother looks like Angelina Jolie, as she did in the 2007 movie version. Say what you want about Ms. Jolie, but she is hardly the "monstrous hell-bride" described in the poem, although the original term is ambiguous in Anglo-Saxon.

In that poem, she doesn't show up until the night after Beowulf's fight with Grendel, in which he tears off the monster's arm and hangs it as a trophy in Heorot, the mead hall.

(I guess people had other ideas about interior decorating in those days.)

After the mortally wounded Grendel runs off to the haunted mere (lake or swamp) where he lives with Mom in an underwater chamber, there is much feasting, drinking, story-telling and gift giving among the humans. It never seems to occur to anyone that Grendel had any family members who might seek revenge. This is kind of ironic, since the feud-oriented raiding culture of the North Sea as depicted in the poem was all about avenging family members. I guess there is a double irony in that the family that seeks revenge here is that of Cain, which originated killing within the family.

His mother, unnamed in the poem, broods over this injury and the bad fate of the children of Cain

She had been forced down into fearful waters,
the cold depths, after Cain had killed
his father's son, felled his own
brother with a sword. Branded an outlaw,
marked by having murdered, he moved into the wilds,
shunned company and joy. And from Cain there sprang
misbegotten spirits, among them Grendel,
the banished and accursed....
...But now his smother
had sallied forth on a savage journey,
grief-racked and ravenous, desperate for revenge.

It's not uncommon for mothers in the animal kingdom to be fierce where their young is concerned and I guess that's also the case with monsters.

THIS GUY thinks so too.

SUIT UP. Massey Energy just got hit with more lawsuits in the wake of last year's Upper Big Branch mine disaster.

PASS IT. Here's an item about some worthwhile legislation in WV which would create an Office of Minority Affairs. If you live in WV, please consider contacting your senators in support of HB 2161.

ELEPHANTS can co-operate. We, however, seem to have some issues in that department.

NOTE: Due to having to hit the road at an ungodly hour again, this post was scheduled in advance. Well may the world go. 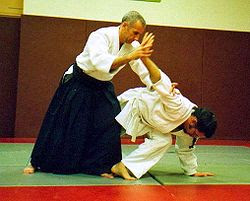 Aikido image by way of wikipedia.

Sometimes when reading various classics or works of literature, my mind gets sidetracked to certain obscure questions. These may be fairly random, like wondering why Victor Frankenstein took the trouble to stitch several bodies together before animating his monster instead of using just one. Or why in the Iliad King Priam of Troy didn't tell Paris and Helen to get a room in some other city and save a whole bunch of trouble.

At other times, the martial artist in me wonders about technical details. Example: just what throw did Orlando use against Charles in Shakespeare's As You Like It? Ditto with how Gilgamesh threw Enkidu in the world's oldest surviving epic (I suspect he used something like judo's uki otoshi).

A similar question arises in Beowulf's fight with Grendel. The hero vowed to use no arms against the monster. After a feast, he and his homies settle down to sleep in the cursed mead hall. Grendel kills one Geat before he turns to Beowulf, who pretends to be sleeping:


...Venturing closer,
his talon was raised to attack Beowulf
where he lay on the bed; he was bearing in
with open claw when the alert hero's
comeback and armlock forestalled him utterly.
The captain of evil discovered himself
in a handgrip harder than anything
he had ever encountered in any man
on the face of the earth. Every bone in his body
quailed and recoiled, but he could not escape.

Any grappler who has ever had their arm caught in a nasty joint lock will probably feel at least a twinge of sympathy for Grendel. It's no fun at all, even if the opponent doesn't yank off your arm like Beowulf did Grendel's. But the martial arts nerd in me asks, which armlock was it? Inquiring minds want to know!

(My guess was a bent arm lock like judo's ude garami.)

Believe it or not, I'm not the only person who thinks about things like this. While surfing the web, I found a scholar who reconstructed the fight based on a close reading of the text proposes a straight arm lock similar to aikido's ikkyo technique.

Bent or straight, take your pick. All you have to do is click on the links and then, you too, Gentle Reader, will be ready to take on a man-eating humanoid Grendel wannabe. As I've rhetorically asked before, is this a full service blog or what?

p.s. You might want to practice a time or two first.

WISCONSIN. A new poll finds that most Wisconsin residents are not amused by their governor's union busting.

WORLD HUNGER could be vastly reduced if women had more equal access to services, education and resources.

THIS IS KIND OF SAD. Here's an article about how psychiatry went from talking to people to dispensing pills with minimal human interaction.

APOCALYPSE NOW AND THEN. Here's a look at doomsday scenarios throughout history.

NOTE: This post was scheduled for publication in advance as I have to be on the road at an ungodly hour. If anything really bad happens in the meantime, let the record show that I was officially against it.

My years spent (some might say wasted) in practicing karate have left me with certain prejudices in favor of minimalism. I think it's cooler to accomplish things with relatively empty hands than with a whole bunch of gear.

Of course, I realize that we (along with crows, monkeys and several other animals) are tool users and we couldn't survive in the manner to which we've become accustomed without them. Still, I think there's more honor in limping through a distance run than tooling around all day in a four wheeler.

Relying on external aids isn't the same as doing something yourself. You can bulk up with steroids or have visions with hallucinogenic drugs, but that's the chemicals, not you. Anyone can go fast in a motor vehicle or do a lot of damage with firearms, but that's only due to the machines used. It's one thing to paddle a mile on a lake in a canoe, but something else to be able to swim it, however slowly.

That's one thing I like about Beowulf. In his approaching conflict with the man eating monster Grendel, he vows to use no weapon at all. This turns out to be a good thing, since we later learn that no weapon would work against him. As he puts in in Seamus Heaney's translation:

"When it comes to fighting, I count myself
as dangerous any day as Grendel.
So it won't be a cutting edge I'll wield
to mow him down, easily as I might.
He has no idea of the arts of war,
of shield or sword-play, although he does possess
a wild strength. No weapons, therefore
for either this night: unarmed he shall face me
if face me he dares. And my the Divine Lord
in His wisdom grant the glory of victory
to whichever side He sees fit."

As Odysseus put it in Homer's epic of homecoming,

There is no greater glory for a man as long as he lives than that which he wins with his own hands and feet.

THE FEDERAL BUDGET struggle is going to heat up as the House and Senate joust over competing visions.

THE POLITICS OF PLAYING CHICKEN is discussed here.

THE MISSING PIECE in the debate is the revenue side.

DEGREES ALONE won't get us to a more equitable society, according to this column by Krugman. It will also take union organizing.