When I updated this blog Friday morning, I had no idea  about the carnage that had begun or would soon begin in Connecticut. Anything I could say about it would not be adequate. I can barely imagine the sorrow and suffering that the loved ones of those who were killed. It is yet another reminder, if one was needed, of how fragile life is and how much easier it is to destroy than to create.
by El Cabrero No comments: 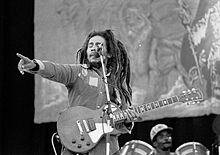 I just finished watching the new Bob Marley documentary and it made me realize how much his music has meant to me over the years. The first time I heard Redemption Song it pretty much stopped me in my tracks.

Once I "discovered" Bob, years after most people had, I devoured all his music I could find. West Virginia and Jamaica are obviously different places, but both have been colonized in their own way by Babylon.

Marley's music has a powerful combination of radicalism and spirituality that has given many people the world over the courage to get up/stand up. It's been too long since I gave Bob a serious listen but that's about to change. I highly recommend it as there's nothing better to lively up yourself.

HOW DID I MISS THIS New York Times column about zombies, apocalypses and such?

NOT AN APOCALYPSE, NECESSARILY, BUT BAD ENOUGH. I'm referring to climate change. That's the bad news. The good news is it looks like more people are starting to take it seriously.

On being blinded with science too many times

OK so I got this new used car when my Old Faithful was on its last legs. As part of the deal, I got three free months of satellite radio. My experience therewith reminds me of Bruce Springsteen's song 57 Channels (and nothing on).

I think this is a case where legislation is in order. For example, in a just and rational world, any 80s music channel should be required to play Safety Dance at least once an hour, with Sledgehammer following close behind. Instead, I've heard She Blinded Me with Science more times in the last week than in that entire decade.

And don't even get me started on the 90s. As far as I can tell, the only musical justification for that decade was Counting Crows doing Mr. Jones and I haven't heard that one yet either.

THE CLIFF THING. Here's an interesting look at public opinion.

I seem to recall that there was a bit of hype a few years back in certain tightly wrapped religious circles about the possible end of the world or some related apocalyptic event. The occasion was the arrival of June 6, 2006: 6/6/06, 666 being the "number of the beast" in the Book of Revelation.

CLIMBING DOWN THE FISCAL CLIFF. Here is a look at how to do it.

WANT TO CUT THE DEFICIT? Here's one place to look.

IN CASE YOU WERE WONDERING, cheese was first made in northern Europe 7,000 years ago.

I'm still trying to figure this one out. The Spousal Unit, aka La Cabra, has a thing about violent entertainment. She wouldn't watch Rome, The Walking Dead, or even The Sopranos. But she loved every minute of The Expendables 2. For real. I guess it's really more about the aesthetic and intellectual quality of the film.

WHAT SHOULDN'T BE FOR SALE? Here's one person's list. What would be on yours?

YUK. At least this hasn't happened in WV. Yet.

THE BIG KAHUNA in terms of real gains for social justice will be Medicaid expansion to cover low income working adults as part of the Affordable Care Act. It looks like the feds are getting a little tougher on states that are holding back from taking this step

This summer, advocates for children and working families won a small victory when their combined bad noise prompted WV Governor Earl Ray Tomblin to delay major cuts in child care assistance, increases in co-pays and reduced eligibility. Alas, unless something is done, all those cuts go into effect on Jan. 1, which would be quite a lump of coal in the stocking. Here's a good op-ed on the subject.

UHHHHHH maybe if we weren't giving away the store with business tax incentives we might be able to pay for child care for working people.

WORKING IT. Here are some cool pictures and videos of birds of paradise doing the courtship thing

A while back, I vowed to blog about that (the) great American novel Moby-Dick and why you, Gentle Reader, should give it a try for the first or 50th time. As I've said before, one of the best reasons to read it is that it's laugh out loud funny.

Most of its humor is directed at Ishmael, its narrator, who may or may not be reliable. One great example of this occurs early in the book and involves a bit of a gender bender.

Much could be, and no doubt has been, written about homoerotic or at least sexually ambiguous themes in Melville's work. Not that there's anything wrong with that. One could argue that the first such episode in this classic occurs when Ishmael arrives in New Bedford, Massachusetts en route to a gig on a whaling ship. He learns to his dismay that he missed the boat to Nantucket and has to stay a few nights before the next one is available.

That raises just a bit of tension since our hero is a bit short of money. His tension rises more when he is told by Peter Coffin, proprietor of the Spouter Inn, that no more rooms are available and that he must share a bed with a harpooneer. I think it's fair to say that most guys would be just a bit weirded out to be told that they'd have to share a hotel room with a total stranger, much less a bed.

Ishmael gets even more weirded out the more he hears about his roommate, who is apparently out trying to sell shrunken heads--something he's even done on the sabbath! It gets worse when he hears that the stranger is a bit of a cannibal.

Ishmael then resolves not to sleep in said bed but to try to find some angle of repose on a bench in the dining room of the inn. When this doesn't work, and when it looks like the roommate may not return that night, he relents and tries to sleep. Mayhem very nearly ensues when the tattooed Queequeg returns and is startled by his bedmate.

In the end, all is well, and Ishmael claims never to have slept better in his life:


Upon waking next morning about daylight, I found Queequeg's arm thrown over me in the most loving and affectionate manner. You had almost thought I had been his wife.

A bit later on, Ishmael relates that after sharing a companionable smoke from Queequeg's tomahawk pipe,


he pressed his forehead against mine, clasped me round the waist, and said that henceforth we were married; meaning, in his country's phrase, that we were bosom friends; he would gladly die for me, if need should be.

What's really going on here, methinks, really has more to do with overcoming prejudices than with sexual ambiguity. Queequeg turns out to be far more admirable than most of the Christian characters in the book and Melville himself in other works delighted in unfavorably contrasting missionaries with cannibals.

The book is saying that the prejudices we harbor, then as now, often turn out not to be just wrong, but even comically wrong. Which is another reason you should read it.

THE POWER OF NEGATIVE THINKING, or at least a critique of uncritical positive thinking, is discussed here.

THIS IS REALLY GROSS, but click here if you want to learn more about how maggots can heal wounds.