I've argued for a long time that WV should change its sadly outdated state motto from "Mountaineers are always free" to "you can't make this **** up" for a good while now. The latest proof that this step is needed is a story put out by CNN yesterday about a new twist in the Russia investigation that suggested someone from WV tried to arrange a meeting between campaign aids and Russian leader Vladimir Putin.

Who knew that El Cabrero's beloved (sort of) state of West Virginia would become a hotbed of international intrigue? One can hardly wait to see what happens next.
by El Cabrero 1 comment:

The better angels of our nature 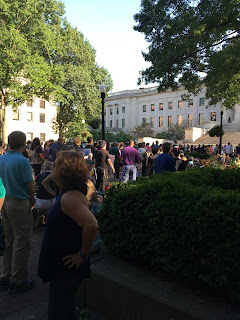 At least 500 people attended West Virginia's first Black Lives Matter rally Sunday at the state capitol in Charleston. There were some apprehensions going in to this. Rumors spread of armed counter-protesters, especially after controversy surrounding the statue of Stonewall Jackson on capitol grounds, which somehow got added to the mix. BLM organizers took pains to stress that the rally had nothing to do with the statue.

People connected with the event prepared for various contingencies, most of which fortunately didn't occur. Some attended an AFSC nonviolence training. Others were trained as marshals, escorts, legal observers and first aid providers. Several clergy attended as peacemakers and de-escalators. 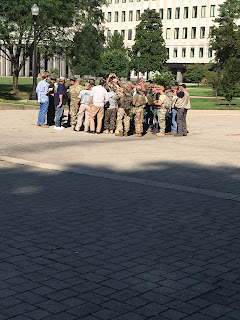 There were a small number of peaceful counter-protesters at the Stonewall statue and a pretty big militia contingent. Those who came on capitol grounds (see above) were unarmed. However, I'm told that those on the perimeter were packing pretty heavily.Fortunately, the militia guys were pretty laid back, which is a plus. There was a strong police presence, but overall it was calm.

As was the case when Trump came to WV, I was a legal observer under the umbrella of the ACLU. It's a role I enjoy as it gives me an excuse to attend rallies without having to chant (outside of Buddhist monasteries or high church rituals, I dislike the practice). Luckily, there was nothing much to observe.

I'm pleased to note how peaceful it was and how people safely went home without incident when it was over. It was reassuring to see that even in times as weird and tense as these West Virginians are still pretty nice. What Lincoln called "the better angels of our nature" prevailed at least this time.

There was good media coverage.  Here is some from the Gazette-Mail, WV MetroNews, and WV Public Broadcasting.

It was a great event. I have a feeling we'll be doing a lot more of this kind of thing for the foreseeable future.
by El Cabrero No comments: