I've mentioned before that WV Governor Earl Ray Tomblin did a great thing by deciding to expand Medicaid coverage under the Affordable Care Act last spring. The WV Department of Health and Human Resources, an agency with which I have had a difference or two over the years, has also done a stellar job of enrolling people in the expanded program.

As a result, per capita we have the highest enrollment in the nation. As of Dec. 23, that meant 83,000 were enrolled for coverage that began yesterday. I'm sure the numbers have gone up since then. It's nice to be on top with a good number for a change--thanks to those who made it happen!
by El Cabrero No comments:

Looking back, looking ahead 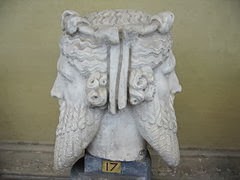 Looking back, 2013 was an amazing year in West Virginia. A year of grace, even. Several important victories for social justice were won. Health insurance was hugely expanded--at last word, over 83,000 working West Virginians were about to gain coverage for the expanded Medicaid program under the Affordable Care Act.

The saying says that lightning doesn't strike twice in the same place. Statisticians sometimes talk about reversion to the mean, which means that hot streaks end. And sometimes in my life, it seems I've had to pay in blood for every good day.

I don't know what 2014 will hold. We may have to pay heavily for 2013's good fortune. If so, so be it. The gates of the temple of Janus are always open in the fight for social justice.

I'm grateful to all my friends and comrades in the struggle...which is about to heat up again.
by El Cabrero No comments:

Having it both ways

The Charleston Daily Mail is a newspaper with Republican editorial leanings. You can frequently find denunciations within its pages of President Obama's alleged "war on coal." Presumably, one reason they are upset about this is because of the potential of miners losing their jobs.

Yet when the US Congress adjourned for the year without extending unemployment benefits to 1.3 million Americans, the editorial page applauded. It turns out that one of the counties hardest hit by the cut is Logan County, in the heart of West Virginia's coalfields, where 544 people will lose benefits.

One might think that for the sake of consistency, at least a few crocodile tears for jobless miners might be forthcoming, but that isn't the case so far.

Times like these make me wish we had a put up or shut up rule.

SPEAKING OF WV, it looks like the Mountain State will be one of the biggest winners under the Affordable Care Act. Just before Christmas, I heard that at least 83,000 West Virginians had signed up for expanded Medicaid benefits since Oct. 1.

OH REALLY? In his latest column, E.J. Dionne Jr. writes that "on a longer view, 2013 could be remembered as the year when the far right began to weaken, the forces of obstruction began to recede and the country began moving toward at least the possibility of constructive government." Reckon wonder if he's right?