The (hot) dogged pursuit of justice 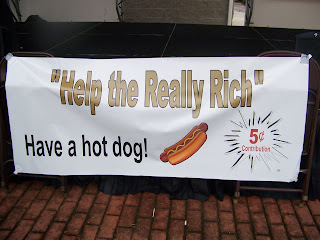 West Virginians are sometimes said to be a proud people. There may be something to that, but we're not too proud to resort to a cheap stunt to make a point. In fact, we've done a lot of that this summer. 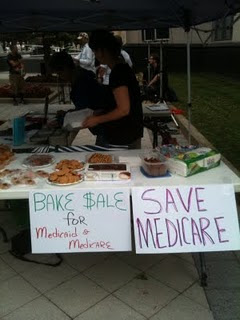 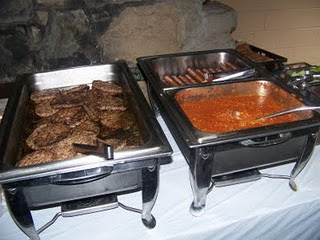 As previously noted here, on August 14, the WV AFLCIO and allies held a series of hot dog sales around the state to celebrate the 76th birthday of Social Security. Donations of five cents per dog were requested (the 1935 price)in order "to reduce the debt of our nation while protecting the rich and tax dodging corporations." 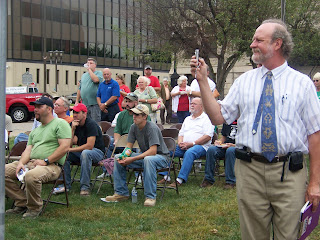 On Thursday, the Parkersburg Area Labor Council, the WV AFLCIO, West Virginians United for Social and Economic Justice and the American Friends Service Committee rallied once more to defend programs for working people and to make the point that the only thing dumber than holding hot dog sales to save Social Security is cutting it to protect tax breaks for millionaires. House Speaker John Boehner was invited, although he did not attend for some reason and we had to make do with a life size cardboard cut-out. I will make no comment on whether this was better than the real thing. 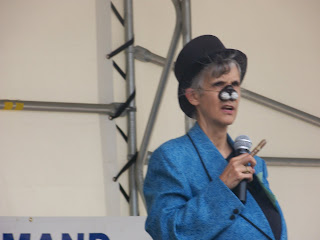 There was also a fat cat skit, which in all modesty El Cabrero must claim as his literary masterpiece. 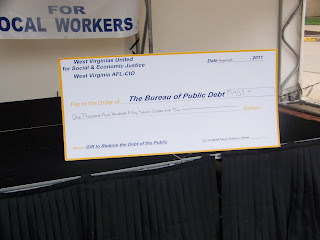 A check with the proceeds of the hot dog sale was prepared to be presented to the US government to show that the working people of West Virginia are doing their bit to save the country. It was for $1317.00 and represented the sale of 26,340 dogs to pay down the national debt. 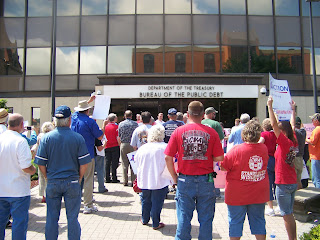 We then dutifully marched to the US Bureau for the Public Debt to make our contribution. Since rich folks and major corporations aren't, somebody has to, right? 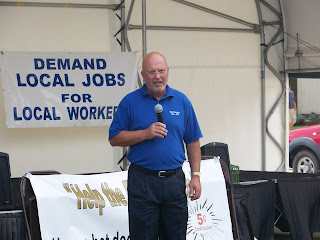 But seriously, folks, as AFLCIO secretary-treasurer Larry Matheney told attenders, "This tongue in cheek thing got somebody's attention. We need to keep the ball rolling. We need to get in the streets to make our voices heard."

We just might need to think of a different stunt next time. 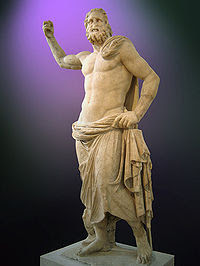 Dammit. West Virginia hardly ever gets anything remotely resembling an earthquake (if you don't count industrial disasters) and I missed this one. Just to be clear, I wouldn't want to experience a big one, but it would have been nice to notice a little one if it actually happened.

I've tried to figure out where I was at 1:51 yesterday afternoon and think it was driving in my old car. The vehicle in question (US and union made by the way) has around 300,000 miles on it and is pretty shaky pretty much all the time. It would have had to have been on an entirely different level of magnitude for me to feel it in that bucket.

Still, one can't be too careful about things like earthquakes. Just for safety's sake, a sacrifice to the Greek god Poseidon might be in order since he has jurisdiction over such things. He's pretty grumpy and it's never a bad idea to stay on his good side.

STANDING WITH WORKERS. Here's what I'm planning on doing Thursday.

BEYOND AUSTERITY. Here are some different ideas for boosting the economy.

HUMANS AND KANGAROOS. Yes, we're cousins. But not very close ones.

As goes the creek... 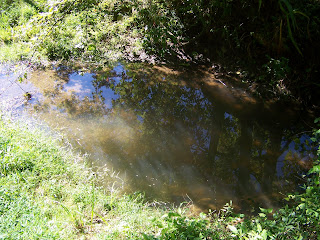 When it is flowing continuously and full of minnows and crawdads and such, all is well or at least more tolerable. When it is dry and lifeless, as often happens in late summer, the world at large seems the same way.

Sometimes when the creek goes dry, it can be months before minnows show up again, even after the water comes back. When that happens, I check each day and usually celebrate the first arrival of fish. (Search this blog for "fish day" and you'll see what I mean).

I am pleased to announce that although it ran dry recently, heavy rains earlier this week restored it for now anyhow and somehow minnows have reappeared from whatever isolated holes they were surviving in.

All of which is to say that there may be hope for the world after all.

MAKE THEM. Here's a proposal for reviving the progressive agenda.

ABOUT THAT WAR ON COAL. It doesn't seem to be going well, since mining employment has actually gone up.

DEPARTMENT OF CORRECTIONS. I really screwed up and reversed the key words in a metaphor about gold and silver in yesterday's post. My bad.

Drilling for gold with silver

Grassroots groups and plenty of ordinary citizens are losing their patience with the WV legislature for its failure so far to regulate Marcellus Shale natural gas drilling, which can have all kinds of negative consequences for citizens, landowners, taxpayers and the natural environment.

A number of groups joined together today in the state capitol for a well-attended press conference on the subject. You know it's a good press conference when the reporters outnumber the speakers and this would definitely qualify.

Some speakers were landowners who told gut wrenching stories about damage to health, family and property and even the loss of a beloved home. Others addressed broader issues.

Aside from compelling stories, for me the stickiest soundbite had to do with water, which is something that will be trashed in massive quantities in the hyraulic fracking process used in Marcellus drilling. As one speaker put it, "Water is life. Everyone knows that."

Water is likely to be the most valuable commodity (and it's really sad that water is becoming a commodity) in the coming century. The speaker predicted that water will continue to be a precious and declining resource long after the drilling is done. Squandering water in this way is like "using gold to drill for silver."

Here's my take on the issue. If memory serves, F. Scott Fitzgerald said that there were no second acts in American life. I don't think that's the case. The Marcellus Shale issue gives WV leaders something like a second chance to have some control over how powerful extractive industries treat the state and its people. State leaders had the same chance 100 or so years ago and blew it.

In their defense, it probably would have been hard for a state politician living in the 1880s to imagine the abuses and exploitation the coal industry would inflict on the state. Current lawmakers have no such excuse.

A WORTHY SUBJECT. This item on the art of airplane sleeping speaks to my condition as it is yet another valuable art I haven't mastered. 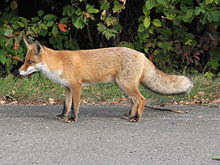 Not the one we saw, but close. Image by way of wikipedia.

One advantage of living immersed in what Karl Marx called "the idiocy of rural life" is the chance for wild animal sightings (the sightings of their domestic cousins being an all too familiar event).

Some such are fairly common, like the large number of deer inhabiting our holler after a good year for acorns. There are also at least three burgeoning crow families within a mile or so, intelligent birds that seem to have a good time. Wild turkeys are becoming increasingly common as well.

Sometimes we are graced with great blue heron sightings, which in my personal world of superstition is taken for a sign of good luck. Less common are green heron appearances, a bird which for some reason seems comical to me.

As far as herps go, lizards seem to be on the uptick as temperatures rise. Box turtles abound while snappers are fewer in number. I've seen about six snake species here, along with several kinds of newts and salamanders.

Possums and raccoons also show up from time to time, although they don't stay alive very long with our Great Pyrenees Arpad around. He regards such animals as lawful prizes and dispatches them to their next rebirth with remarkable alacrity. He has yet to go after a skunk but I'm confident that some such encounter is inevitable. He also keeps coyotes at a respectful distance.

On Sunday morning's dog walk we had a special treat. We knew from scat signs (yes, one even gets used to looking at animal poop with some degree of interest) that some kind of carnivore was on the move but weren't sure what it was. Suddenly, a beautiful full grown red fox dashed across the road, causing much excitement among the canine contingent. This was only the second time I've seen one in eight years of living here. He moved so fast that we wouldn't have been able to take a picture even if we'd brought a camera, which we didn't.

At the time, Isaiah Berlin's essay about foxes and hedgehogs came to mind. In it he quoted an ancient Greek saying to the effect that “The fox knows many little things. The hedgehog knows one big thing.” We don't have hedgehogs around here so I can't say much about them, but the fox appeared to know a thing or two.


It's hard to tell what else might show up. I'm kind of holding out for a bear or big cat of some kind. That would be awesome.

SPEAKING OF ANIMALS, some of them are pretty smart.

WHO'S GOING TO CHURCH? Not who you might think, apparently.

WHAT'S IN A SMILE? More than one might think.

BAD POLITICAL-ECONOMIC NEWS will appear here later in the week. I thought a day's break from it might be in order.