Ken Ward had a great post in Coal Tattoo today, which is the sixth anniversary of Massey Energy's Aracoma mine fire which killed miners Don Bragg and Elvis Hatfield. Nobody far up the corporate ladder was prosecuted for those deaths, although MSHA did level record fines (at the time) against the company.

Just think: if justice would have truly been done then--and if the big dogs at Massey were justly served--there's a good chance those 29 miners killed at Upper Big Branch might be alive. Ward quotes lawyer Bruce Stanley, who represented the families of Bragg and Hatfield:

Sadly, aggressive prosecution against upper management in the Aracoma case might have spared us the horror of UBB. We’ll never know, of course. But we certainly hope that the lesson of making deals with the devil has been learned, that the criminal investigation makes its way into the boardroom as well as the guard shack, and that Alpha chooses a different path than its predecessor.


This time around, at least, federal prosecutors haven't ruled out additional prosecutions.

I don't mean to get too apocalyptic,or too vengeful, but I can't help thinking of the verse from the Book of Revelations where the martyred saints cry out to God, asking how much longer justice would be delayed.

The Secret for dogs 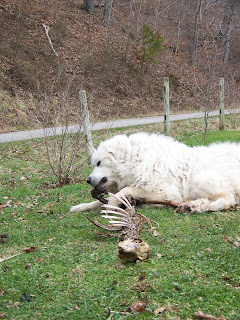 A few years back, the New Age book titled The Secret told readers that the universe was pretty much a wish-granting machine. Here at Goat Rope Farm, the humans are pretty skeptical of such claims, but the animals appear to be true believers.

One great practitioner of The Secret is Arpad, the Great Pyrenees who serves as security chief. He seems to believe that the universe is like a banquet spread out just for him--and it seems to work out that way.

Wednesday, while on a routine afternoon walk, he struck out on his own following his nose and showed up shortly thereafter with the latest gift from the universe, which consisted of the skull, spinal column and ribs of a deer that went down during hunting season.

For him, it's just another example of the generosity of the universe.

A BANG OR A WHIMPER? Here are some possible doomsday scenarios for your dining and dancing pleasure.

ANCIENT PERUVIANS ATE POPCORN. So what movies did they watch?

Email ThisBlogThis!Share to TwitterShare to FacebookShare to Pinterest
Labels: Arpad, dogs, pets, popcorn, the end of the world, The Secret

I think there is a Zenlike profundity to the old REM song "Stand." I have long noticed that people concerned with things like peace and social justice are often deeply concerned about things that are far away.

There's nothing wrong with that. It's admirable. But I keep going back to the ancient observation of the Stoic philosopher Epictetus, who noted that we have control over some things but not others. And it's always seemed to me that we have more power where we are than where we aren't. That's where the REM lyrics come in.

It's like Vegas. The odds are against you, but you must be present to win.

YOU MAY THINK PEOPLE ARE GOOD AT USING THEIR MIDDLE FINGERS, but they have nothing on a species of Madagascar lemurs.

A song that came to mind

Sitting through my beloved state of West Virginia's official celebration of Martin Luther King Jr.'s birthday, which really had some great and unexpected moments, I couldn't help thinking about some of the lyrics of Phil Ochs' song Crucifixion, which, as the title implies, is a bit of a downer.

For Ochs, it was a song about Christ, about King himself, and maybe about a Kennedy or two. But it's also about how we somehow like to neutralize the threats posed by some people who shake things up and turn those who were dangerous in life to something harmless but fascinating in death--while we get off on the drama of it all.

Here's a link to the lyrics (although I heard I line or two differently).

ON THE VIRTUE OF NOT STAYING QUIET. Here's Krugman on Dr. King's legacy today--and what we can learn from it.

A CHANCE FOR A GOOD BILL? For the last few years, I've worked with friends to try to pass a bill that would begin to address racial disparities in WV. This article makes it sound like something might happen this year. Would that it were so.

“We must rapidly begin the shift from a "thing-oriented" society to a "person-oriented" society. When machines and computers, profit motives and property rights are considered more important than people, the giant triplets of racism, materialism, and militarism are incapable of being conquered.” --Martin Luther King Jr.
by El Cabrero No comments: