Change we can't help believing in 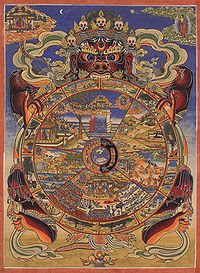 Tibetan image of the wheel of life and death, courtesy of wikipedia.

The theme at Goat Rope is hard times and ways of dealing with them. My first choice is that they "come again no more," as the song says. My second choice is that people come together and make them get better ASAP. But sometimes they just come and stay a while. And whatever else people do about them, we just have to get through them.

One way of looking at the world which is all about dealing with hard times and suffering is Buddhism--and you don't have to be a card carrying Buddhist to get something out of it.

According to Buddhist teachings, everything--good, bad, or indifferent--is impermanent, coming into being and passing away depending on conditions. No matter what the situation is, it's going to change. It may not change for the better, but it will be different. The Buddha taught that "whatever is subject to origination is subject to cessation."

We often screw up royally by regarding a temporary situation as permanent and acting or believing accordingly.

The Diamond Sutra, a Mahayana Buddhist text puts it like this:

"So I say to you -
This is how to contemplate our conditioned existence in this fleeting world:

Like a tiny drop of dew, or a bubble floating in a stream;
Like a flash of lightning in a summer cloud,
Or a flickering lamp, an illusion, a phantom, or a dream.

So is all conditioned existence to be seen."

The universe, in other words, is kind of like the weather in El Cabrero's beloved state of West Virginia: if you don't like it, stick around. It'll change.

SPEAKING OF HARD TIMES, the Economic Policy Institute reports that unemployed workers outnumber job openings by more than 3 to 1.

GETTING IT RIGHT. Here's a take on what we need to do to fix the US economy.