Regarding firewood, Sandy, Cheetos and the secrets of my success 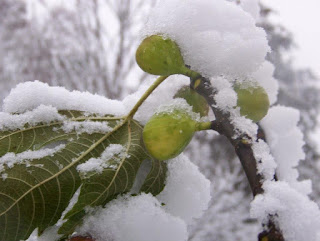 Figs in the snow. Photo credit: the Spousal Unit.

Whatever else can be said about 2012 in West Virginia, it's been a good year for firewood. Between last summer's de recho storm and last weeks encounter with Hurricane Sandy, it's laying all over the place.

Speaking of Sandy, while lots of people got it worse, we had a bit of a hit, including heavy wet snow and most of a week without power, water or phone, spiced with transportation/chainsaw issues, falling trees and concerns about rising water. If the Ohio River hadn't been so low due to the late summer drought we might have had some serious flooding.

I wound up celebrating the lights coming back on by taking part in  Darkness Falls, a 7 mile nocturnal trail run. The race course is beautiful in the daylight. In the dark, it was a bit tricky, thanks to Sandy's legacy. The hills are evil by day or night. I think I actually did it a little faster in the dark than when I tried it by daylight.

Here's my secret to the crucial last week of training: lay around in the dark reading a Dylan biography with a head lamp while nursing a bad back, eating Cheetos and drinking box wine. On race day morning,in lieu of carb loading, head to the local greasy spoon for a massive hillbilly breakfast, complete with bacon, eggs, taters, biscuits and gravy. Eat until exhausted. During the race, try to stay on one's feet and not fall in the river.

Now you know.
by El Cabrero No comments:

I have a friend who has worked tirelessly for peace and justice for about as long as I've been in the world. He just keeps at it whether it is considered to be cool or not...and most of the time, it's not. He kind of reminds me of one of those toy punching bags that keep bouncing back no matter how many times it gets smacked down.

His passion these days is working on climate change, which is kind of hard in WV, the heart of denial. Our ruling class here is pretty much pledged to the idea that anything the coal industry doesn't like can't be true. Their strategy seems to be to deny it as long as possible, then say nothing could have been done about it anyway.

I think time is on his side in one respect: it's going to get harder and harder to deny it, this storm being a case in point. The only question is whether that realization will come too late.

Meanwhile, I'm watching creek levels in WV and wondering what Sandy will have in store for friends near and far.

MINI MOBY-DICK FIX. Here's a word from Ishmael to start off the week:

…as for me, I am tormented with an everlasting itch for things remote. I love to sail forbidden seas, and land on barbarous coasts. Not ignoring what is good, I am quick to perceive a horror, and could still be social with it-would they let me-since it is but well to be on friendly terms with all the inmates of the place one lodges in.


MEDICAID is on the menu this election.

IT'S A SMALL WORLD. Click here for cool pictures of very small things.