If you have been in or around West Virginia any over the last couple of years, you will have heard a lot about the Obama administration's "war on coal." If you drive anywhere in the state, chances are you've passed a billboard with a picture of several Appalachian states with words that reads "Obama's no jobs zone."

West Virginia's ruling class has long mastered the art of the hissy fit and they have been throwing one ever since W left the White House.

But as Ken Ward notes in Saturday's Charleston Gazette, coal employment in Appalachia is actually at a 14 year high.

So if there is a "war on coal" being waged by the administration, I guess you could say it's not going very well. Or you could just call BS. 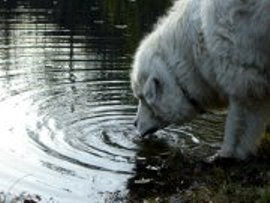 We interrupt today's programming to share this picture taken by the Spousal Unit of Arpad drinking from our pond. I suppose I could come up with some metaphor about how things ripple out but mostly I wanted to give people the chance to look at my Sweet Little Angel Baby from Jesus in Heaven.

OK, so he barks all night, still smells like a skunk a month after his last encounter, and drags in random body parts of slain animals in hunting season. But other than that he's just perfect.

NINE DEMANDS OF THE 99 PERCENT. Here's the first eight. You can add your own.

WHAT HE SAID. Here's an op-ed by the WV AFLCIO's Larry Matheney.

IF PEOPLE WERE SERIOUS ABOUT DEFICITS INSTEAD OF CUTTING PROGRAMS, the solutions would be pretty obvious.

Today, as I was driving my car in the rain, fiddling with my iPhone, working a crossword puzzle, repairing a chain saw and playing my guitar (not really--I can't repair chain saws), a friend sent me a sadly funny series of text messages.

The first one read thus:

I just got asked if I read [Ayn] Rand.

They went on to say they pick up the audio books at the library.

The third one read thus:

(Rand didn't believe in public libraries...or pretty much public anything.)

According to my friend, the Randite in question "didn't even understand when I pointed it out." He went on to say "There is a huge disconnect in this world." Amen to that.

"OCCUPYING OUR DEMOCRACY." Here's Robert Reich on the first amendment rights of corporations and the lack thereof for some people.

The one undeniable achievement of the Occupy movement is the fact that it has changed the national conversation and drawn major attention to economic inequality and the growing power of organized wealth.

All along, though, a nagging question has bothered me. It's kind of the same one that bothered me when US troops were sent to Afghanistan: what's the exit strategy? At what point does one declare victory? When and how do we move on to the next phase of the struggle? It's like the old joke of the dog that chased the car; what does it do when it gets it? Here are some thoughts about this from some people who helped start the movement.

This possible move towards mobility doesn't necessarily mean giving up all encampments, but it might entail recognition that one does not gain points just by camping out. It might be good to move at some point towards a more mobile phase, where different places are targeted for nonviolent action depending on unfolding events. Time could also be spent building stronger alliances between the upstart movement and older social justice institutions.

My reservations about static occupation are not intended as a criticism; it may be largely a matter of temperament. I value mobility above almost anything else so the idea of being tied to one spot makes me feel claustrophobic. Plus, as a person of Scotch Irish descent, I have a hereditary disposition to prefer raiding to occupying.

In any case, the challenge now is how to keep the movement fresh and let it evolve in new and exciting directions.
by El Cabrero 1 comment: 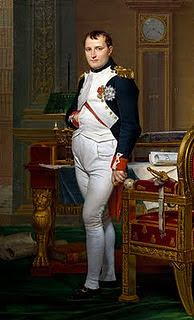 Watching the WV legislature is an occasionally enjoyable spectator sport. Earlier today, which is almost yesterday at this point, I watched an interim committee meeting in which the staff person for an anti-gay "religious" group dug himself in deeper and deeper in a rambling speech.

A line from Napoleon which may well have appeared here before came to mind: "Never interrupt your enemy when he is making a mistake."

(Of course El Cabrero has no enemies. He may, however, have any number of euphemisms.)

THIS IS GOING TO BE INTERESTING. The Supremes vs health care reform, that is.

THE WHOLE REGULATIONS KILLING JOBS THING isn't all it's cracked up to be.

Ready or not, here comes the week. Here are a few items that caught my eye.

A NEW PROGRESSIVE MOVEMENT? Economist Jeffrey Sachs thinks so. I'm not so sure yet.