The real reason for living 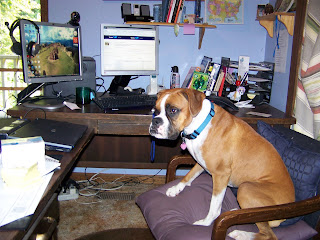 For what do we live, but to make sport for our neighbors and laugh at them in our turn?--Jane Austen


Now that's a crowd. Image from the 2008 Olympics by way of wikipedia.

As I've mentioned in earlier posts, Darwin's idea of natural selection was shaped by Thomas Malthus' ideas on population. Simply put, he argued that humans tend to multiply faster than resources do, which leads to hunger and scarcity and all kinds of nasty checks on population.

This turned out not to be the case for industrial societies, which have been able to dramatically increase production and maintain growing populations. There is also a tendency for population growth to slow as living standards rise. But Malthus might have been at least partially right. There have been numerous cases where pre-modern civilizations collapsed due to over-stressing their environment and growing beyond its carrying capacity. Jared Diamond's book Collapse gives several examples and is a compelling read.

The scary part is that if we don't work towards a sustainable approach to economy, energy, ecology and population, we might head that way ourselves. If that happens, it will be more due to our doing wrong than to Malthus being right.

BIG CHANGES. The Recovery Act is making big changes in technology and clean energy, most of which have been under the radar, as Time Magazine reports.

WHILE WE'RE AT IT, the Congressional Budget Office estimates that the Recovery Act has lowered unemployment by up to 1.8 points in the last quarter. The problem is that it wasn't big or targeted enough, as Paul Krugman again argues here. Now things have gotten to the point were firefighters are being laid off in many cities.

NOT THE BEST PR DEPARTMENT. The Manhattan Mosque controversy might not be sending the best message around the world.

IN CASE YOU WERE WONDERING WHY FISH IN THE ARCTIC DON'T FREEZE, click here.


Scrooge and Marley's ghost in Dickens' A Christmas Carol.

Charles Darwin's ideas of evolution by means of natural selection were shaped in part by Thomas Malthus' theories of population. Malthus believed that human population tended to increase faster than available resources.

These ideas became very popular amongst conservative Victorians, who used the idea to argue against social reforms for the poor, which presumably would only lead them to have more children and become poorer.

This showed up in popular culture in the words of the as yet unrepentant Scrooge in Charles Dickens' A Christmas Carol. Early in the story, Scrooge is visited by two humanitarian gentleman soliciting Christmas donations for the poor. Here's how Ebenezer responds to their request:

``Are there no prisons?'' asked Scrooge.

``Plenty of prisons,'' said the gentleman, laying down the pen again.

``And the Union workhouses?'' demanded Scrooge. ``Are they still in operation?''

``The Treadmill and the Poor Law are in full vigour, then?'' said Scrooge.

``Oh! I was afraid, from what you said at first, that something had occurred to stop them in their useful course,'' said Scrooge. ``I'm very glad to hear it.''


``I wish to be left alone,'' said Scrooge. ``Since you ask me what I wish, gentlemen, that is my answer. I don't make merry myself at Christmas and I can't afford to make idle people merry. I help to support the establishments I have mentioned: they cost enough: and those who are badly off must go there.''

``Many can't go there; and many would rather die.''

``If they would rather die,'' said Scrooge, ``they had better do it, and decrease the surplus population...''

THE NEW UNEMPLOYMENT. Here's an op-ed by yours truly about how being unemployed has changed in this recession.

310 MILLION WHAT? Attacks on Social Security, rhetorical and political, are getting hotter. 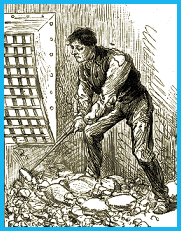 A member of the "surplus population" breaks stones in a Victorian workhouse.

I've been musing on Darwinian themes here lately. If you like that kind of thing click on earlier posts.

Charles Darwin derived his idea of evolution by means of natural selection from Thomas Malthus' An Essay on the Principle of Population. The irony is that Malthus wrote it about humans and was mostly wrong and that Darwin applied to to the natural world and it was mostly right.

Moving from science to politics, Victorian era conservatives loved Malthus. They took his argument to mean that if workers got better wages, they'd only have more kids, for which there wouldn't be enough to go around, which would make them worse off than they were before. Give them jails and workhouses instead!

That has pretty much set the pattern for most arguments on the right against most progressive policy measures: anything that is aimed at helping poor folks would only hurt them, so the best way to really help them is to stick it to them.

Malthus turned out to be wrong about humans, at least for the period of the industrial era into our own. Advances in science and technology in the period since 1800 have made possible an expansion of population and an improvement in living standards for many people. And people tend to have fewer children as living standards rise and children are more likely to live to maturity, which is known as demographic transition.

In the modern world, hunger and starvation are more matters of politics than of population as such, more about distribution than demographics--although that might not always be the case in the future as we stress the environment and push the limits of the earth's carrying capacity.

EVIL, DANTE AND ALL THAT. Here's a shout out to a friend and fellow WV blogger over at Esse Diem for a post about the science of evil, a perennial favorite topic of El Cabrero.

ONE OUT OF FIVE AMERICANS believe some strange stuff.

SO MUCH FOR SUPPLY SIDE ECONOMICS. We have a problem with demand.

UPPER BIG BRANCH. The first settlements have been reached in wrongful death lawsuits as a result of Massey Energy's Upper Big Branch mine disaster, as Ken Ward reports in today's Gazette.

The struggle for existence 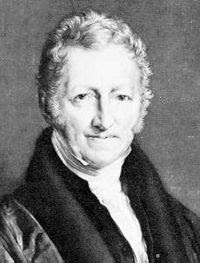 I've been musing off and on here lately about Charles Darwin and the legacy of his thought. If you like that kind of thing, check out some of last week's posts.

As Darwin began to build his theory of evolution, he struggled for some time with finding the mechanism that might drive it. He found a clue in reading Thomas Malthus' An Essay on the Principle of Population, which incidentally became very popular amongst Victorian era reactionaries who opposed any improvement in the condition of the working classes.

Malthus' basic idea was that production of food and other necessities could only increase arithmetically (think 2+2+2...), whereas population tended to increase geometrically (think 2*2*2...). As he put it,

I think I may fairly make two postulata. First, That food is necessary to the existence of man. Secondly, That the passion between the sexes is necessary and will remain nearly in its present state. These two laws, ever since we have had any knowledge of mankind, appear to have been fixed laws of our nature, and, as we have not hitherto seen any alteration in them, we have no right to conclude that they will ever cease to be what they now are...

Assuming then my postulata as granted, I say, that the power of population is indefinitely greater than the power in the earth to produce subsistence for man. Population, when unchecked, increases in a geometrical ratio.

(Malthus' ideas caused all kinds of political mischief, but I'll leave that for another day.)

For Darwin, the basic dynamic Malthus discussed was useful in looking at the evolution of species. The tendency of plants and animals to produce more offspring than could possibly be supported led to a "struggle for existence" with which natural selection could work. Given that struggle, those organisms best adapted to environmental challenges would be more likely to live to maturity and produce offspring.

As the saying goes, even a wild hog can dig up something useful sometimes. More on Malthus to come.

INTOLERANCE. Here's a photo essay on intolerance in America by way of Time Magazine.

CRY, CRY, CRY. It seems to serve an evolutionary purpose.

MOUNTAINTOP REMOVAL is the topic of this NY Times editorial. I don't think they're for it.

THE GROWING GAP. America's widening class divide is the subject of this Gazette rant.