Lots of people in West Virginia are not amused by Gov. Early Ray Tomblin's decision to use his line item veto powers to slash programs for kids, vulnerable families and battered women--while also giving millions in tax credits to a millionaire.

Here's a great editorial in the Charleston Gazette and some coverage from WV Public Broadcasting.

"Puppies and kittens just got line item vetoed by the Governor."

What was I thinking?

A week or two back, I signed up to run a 15 mile trail run tomorrow morning for reasons that now escape me. I have two bad knees, one bad foot, and a nearly dead heart. Plus, I haven't run that far since 2003.

And the best/worst part is the race starts at 7:30, about two hours before my body wakes up on a good day.

In other words, it should be a day of glorious agony.

I take as my (admittedly flawed) patron saint for this adventure Teddy Roosevelt, who said this:

It is not the critic who counts, not the man who points out how the strong man stumbles, or where the doer of deeds could have done them better. The credit belongs to the man who is actually in the arena, whose face is marred by dust and sweat and blood; who strives valiantly; who errs, who comes short again and again, because there is no effort without error and shortcoming, but who does actually strive to do the deeds; who knows great enthusiasms, the great devotions; who spends himself in a worthy cause; who at best knows in the end the triumph of high achievement, and who at the worst, if he fails, at least fails while daring greatly, so that his place shall never be with those cold and timid souls who neither know victory or defeat.

That's my story, anyway, and I'm sticking with it.

ON THE BRIGHT SIDE,  WV Gov. Tomblin signed the Future Fund into law.

Better a greyhound than a kid in WV

Meanwhile, state subsidies for greyhound dog breeding and horse racing continue. And rich guy from the Greenbrier got his tax credits. I guess that's all that matters.
by El Cabrero No comments:

A champion for children

El Cabrero's Spousal Unit is a Spanish teacher. At one point, she was talking to students in WV's poorest county about the custom of a midday siesta or lunch/nap, a custom in many Spanish-speaking countries. She asked them whether they'd prefer to have a siesta or a regular school lunch period as is the custom here.

You might think the idea of a long break away from school would be the top choice, but it wasn't. The kids said they liked it the way it was done at their school, "because everybody gets to eat."

Whatever their other hardships, those children were fortunate enough to live in a county where the school system made feeding all children regardless of ability to pay a top priority.

It is sad but true that even in the 21st century, many children in West Virginia (and elsewhere of course) don't have basic food security, which is defined as existing "when all people at all times have access to sufficient, safe, nutritious food to maintain a healthy and active life."

Obesity, by the way, an all too frequent occurrence here, doesn't disprove food insecurity. It often accompanies it. Cheap processed foods high in calories and fat and low in nutritional value often form the diet of the poor, especially of those living in "food deserts."

Here's something else to think about. During all the days when school was cancelled due to weather, many kids do without nutritious meals.

Still, WV has taken some strides in fighting this problem. In 2013, the legislature passed the Feed to Achieve Act, which ultimately aims to ensure that all schoolchildren in the state enjoy at least two free nutritious meals a day. That hasn't happened yet, although a great deal of progress has been made.

A big reason for that progress is that WV is blessed to have a real champion for children running the state Office of Child Nutrition. His name is Rick Goff and I'm proud to consider him to be a friend. He was profiled in this recent article in the Charleston Gazette.

Goff's counsel was heavily relied upon as state Senator John Unger and others crafted the Feed to Achieve Act. He is on fire to make sure that we end the "hunger games" in this state. And with people like him in the fight, we just might get there.
by El Cabrero No comments:

I have long been aware from personal experience and observation that being poor is not nearly as much fun as some people who aren't tend to think it is. This piece by Barbara Ehrenreich in the Atlantic points out that it's also expensive.

Ehrenreich's article reminded me of this classical sociological analysis by Herbert Gans of all the ways poverty benefits people who aren't poor.

Come to think of it, that reminds me of these lines of the divinely mad and inspired English poet William Blake from the poem "The Human Abstract" in Songs of Experience.

Pity would be no more
If we did not make somebody poor,
And Mercy no more could be
If all were as happy as we.


(Note: if you want more of Blake, search the Goat Rope archives in the upper left hand corner of the screen.) 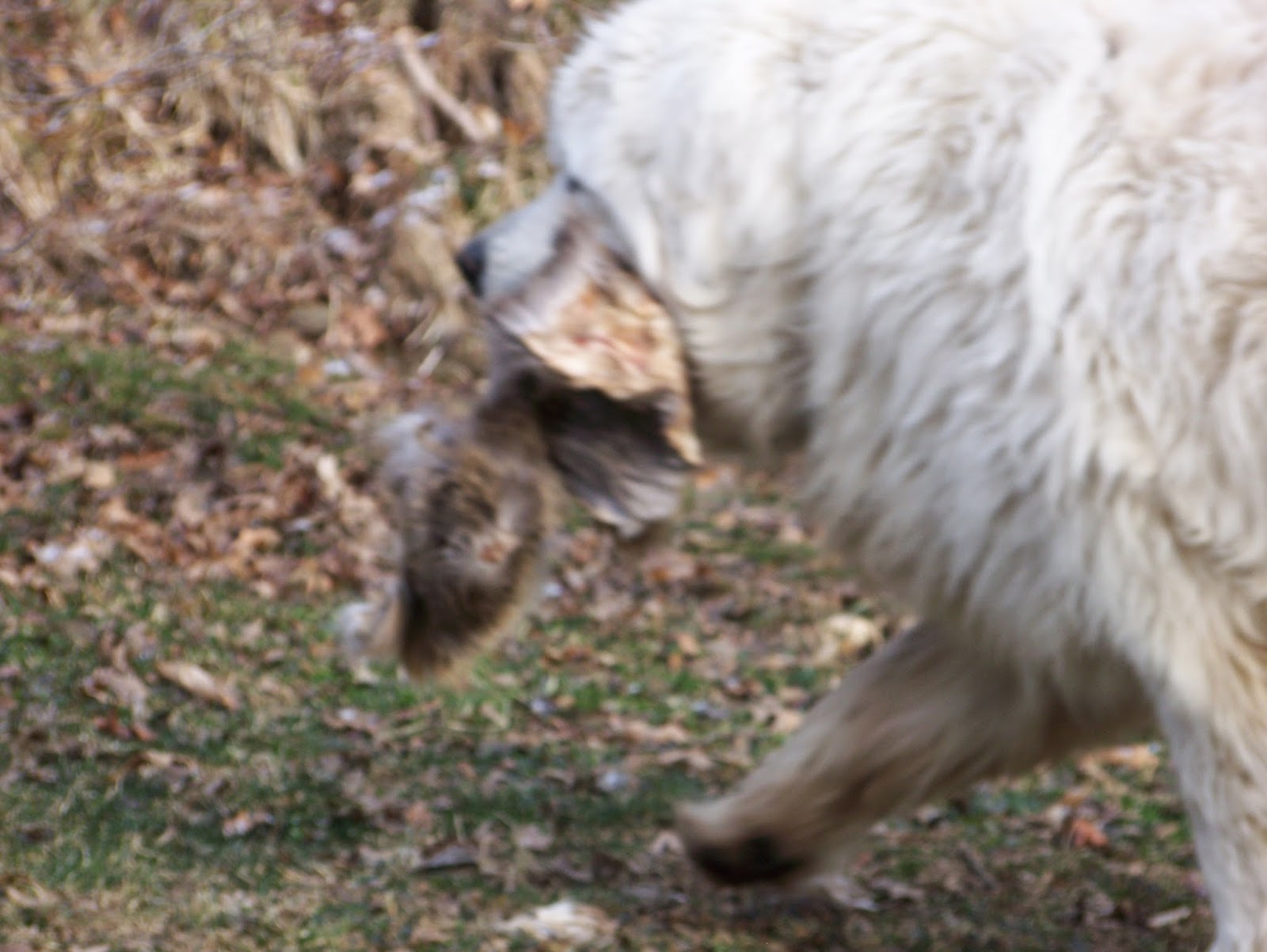 ...how about another gratuitous animal picture? This photo, taken this weekend shows Arpad, our Great Pyreness and official People's Commissar of Public Safety at Goat Rope Farm, with his latest treasure find, to wit a decomposing deer hide.

I don't presume to channel what he's thinking, but if I had to hazard a guess, it might be something like:  "Deer season--the gift that keeps on giving." For him, it's yet another proof of the generosity and benevolence of the universe.

And, while I love him dearly, at times like these I'm glad he's mostly an outside dog.

SPEAKING OF DOGS, Paul Krugman wonders here whether Ayn Rand devotee Paul Ryan's recent musings on "inner city" folks might be a "racial dog whistle." My only reservation about this conclusion is that I thought dog whistles were supposed to be so subtle that humans couldn't detect them.

SO WHERE WERE DOGS in the infinitesimally short explosion that gave birth to the universe? I'm guessing they were very tiny. And well insulated.

A tale of two counties

This New York Times story  has gone viral in these parts of West Virginia so you may have already seen it, Gentle Reader. It's about the gap in wealth and income--and longevity--between a rich county in Virginia and McDowell County, West Virginia. Sad but true. But I'll take folks from McDowell any day of the week.
by El Cabrero No comments: